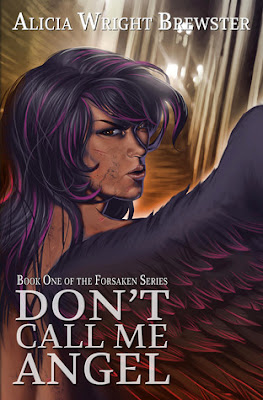 Six is a fallen angel. She was banished from Heaven to Hell, for reasons unknown (she blames the bureaucracy). But centuries of plotting have finally paid off – and she has managed to accumulate the favours and put into action a plan to get her free.

Now on Earth, she has to learn just what this wonderful, incredible and sometimes horrifying place actually is, what the rules are and to find her own place within it while at the same time rejecting god and her old path – she’s no longer an Angel and will not be one.

But what does she do when she finds she is not the first to escape? And worse, that not only are the other escapees engaging in horrific behaviour, but that her friend and ally seems all too willing to join them. And that’s before the old forces she left in Hell decide they want her to return.

This book was a very short read at only 100 pages, but it managed to fit in a lot of depth in a little space. Six has escaped from Hell and is confronted with Earth that makes so little sense to her. The world is beautiful and amazing and stunning – yet it is so full of cruelty and evil. Humanity has so much, yet it still engages in the behaviour she sees down in the pit.

This adds a lot of conflict to her character – as well as her utter rejection for the god that damned her, symbolised by the removal of her wings. But now, when she sees people suffer, she is torn – does she feel compassion for them because of her angelic instincts (which she rejects?) And  when their suffering is just a sliver of Hell – and they get to go to heaven anyway. Even people she considers lacking, who shouldn’t get that, which was denied her. She even gets a sense of anger about it. Yet at the same time there’s her outrage that this suffering, this predation isn’t confined to Hell, that it happens in this wonderful Earth as well – she is angry because they are despoiling this amazing world


Then there’s her fellow Angel Aldren; he’s also an interesting source of conflict. He was, for so long, the only friend and ally she had, especially in the dangerous times in Hell. And yet, now he is out and she can’t agree with what he’s doing – his cruelty, is callous evil, his casual abuse of humanity around him. But to turn on hr only friend is a major step – especially when she thinks that it is Hell that has done this to him; and can she judge him on that if she truly got an easier time in Hell?

Diversitywise, we don’t have a huge cast of characters and most of them are supernatural – but Six is a woman of colour.

And a lot of it felt short-circuited by boiling it down to “Lucifer can find me” – it just replaces everything, ending questions before they’ve been explored, shutting off issues abruptly. It’s also a novella that acts like a full book – so it’s the first book in a series and ends in a cliffhanger. Novellas and short stories tend to be self-contained stories; I don’t think they provide enough foundation for a series and if they end on a cliffhanger I’m left wondering why you didn’t keep writing.

In general I liked this book. It raised a lot of deep issues, it had so many wonderful conflicts, the world looked intriguing and a very different take from the oh-so-usual “fallen angel meets mortal, sexytimes and angst ensure” we are very used to. But it was short, it lacked depth and it could have been so much more.

Alicia Wright Brewster is a mild-mannered lady of average height and above average paranormal obsession. By day, she works in an office. At night, she's an author, an electronics junkie, and a secret superhero. (Please don't ask what her superpower is. That's not very polite.)
In her virtually non-existent free time, she loves to read, watch movies, and eat food. She is particularly fond of the food-eating and makes a point to perform this task at least three times per day, usually more.
www.aliciawb.com
www.twitter.com/#!/aliciawbrewster