Review: The Darkest Gate by SM Reine, book 2 of The Descent Series 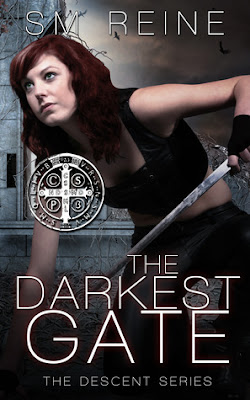 Elise, demon hunting Kopis, is struggling to hold her life together. After her last adventure revealed her presence to the world, her quite life as an accountant is under threat. The magic she used to resurrect James has woken up vast forces in the city – and attracted old enemies who have been hunting her. She is attacked on all sides – but for every giant spider trying to kill her, there are other, more insidious attacks. Her demonic clientel switch to other accountants, her office burned, her bank account emptied – the foundations of her normal life are being undermined, leaving her penniless, homeless and everything she fought for going up in flames.

Which is all the more poignant when we see back into her past and how little she had, how much she has fought to create this life and what she endured before. Ever more desperate, she is forced to make dubious deals and reckless acts to try and stay afloat. How much must she compromise to try and keep herself and her friends alive?

But beyond mundane horrors, if she doesn’t stop the rogue kopis, Mr. Black, then far greater and more dangerous foes could be unleashed including her oldest and most powerful enemy. One she would literally rather die than face

This world continues to be fascinating. It’s one of the few series out there that has a genuinely unique world that is completely different from any I’ve read before. The different kinds of demons, the Warrens, the Angels and, of course, Him are so hugely different from what I’ve seen elsewhere. The magic, the Angel city, the relationship between kopides and aspides and how do they relate to the demon world?

Of course, it’s all the more compelling because we’re given innumerable hints – we know that kopides deal with demon overlords to enter their territory, but not why or how that matches with their demon hunts – or whether kopides do habitually demon hunt. We know that He (who we presume is… god? Maybe?) is Elise’s enemy, but not why. We know she and Angels have a hostile history, but again, not why. Even making portals and seeking the Angelic city – we do not know why they’re doing it. But because it all fits in with the theme of mystery in this book, it doesn’t feel like poor writing (characters doing things without motive) but it hints of a complex and fascinating world that we’ve only seen slivers of. It’s compelling, it’s intriguing and it leaves me hungry for more. I will say, though, that if I don’t get more in the third book I will be frustrated – there’s only so many appetisers you can eat before you want your entrée to arrive.

It did take me a little while to get back in this book – partially because it has been some time since I read the first book and because it started with an un-introduced flashback which I didn’t immediately recognise as such – which made me doubt my memories of what had happened before. It actually took me a while to realise the flashbacks were flashbacks. Once we were past the flashbacks, though, the story picked up extremely well and became much more exciting. Elise is often desperate and feels like she’s facing some impossible odds – both personally with James and generally against two massively powerful and connected enemies. There’s a really strong sense of her desperation not just to try to navigate between these massive forces, trying to survive without compromising herself too greatly and finding out just how much of a pawn she’s turned into, but even simple things like trying to hold her life together, trying to find a place to sleep that is safe and trying to earn enough money to make a living as more and more of the life she has built is torn apart. It’s action packed, it’s emotion packed, it’s information packed – it’s a packed story and it will hold you riveted.

And I really like the characters. The interactions between James and Elise is deep and meaningful, their interactions full of every part of their history and shared experiences even when they are at odds. I like that James is far more complex than just a side-kick, that he has his own conflicts of wanting an actual life beyond just demon hunting – and how that effects Elise and her isolated insecurity. Betty is both awesome and hilariously funny and Anthony is a wonderful example of a very rare human male love interest for a supernatural woman – when we so often see the other way round. And he is neither threatened nor jealous of her power. My main complaint with the characterisation is, again, with Elise – she is a private person but she takes it to extremes, often speaking to her friends and loved ones excessively harshly, constantly fobbing them off, keeping unnecessary secrets and pushing them away. I don’t know if I’m happier that her friends don’t take offence at this so we’re not consumed by the personal drama it would cause, or irritated that they endure such treatment without complaint.

Inclusionwise we do have some POC in background roles and James Faulkner who may be a POC, I’m not sure and it isn’t overt or something that makes up a big part of the character or his descriptor, but at one point, once, he is described as having brown skin.

The animosity between Stephanie and Elise (and her friends) is something I didn’t care for. I can understand them disliking each other, they have considerable reason to do so, but the level of dislike is extreme and the way it is expressed (Betty complaining in Stephanie’s house that it “smells of bitch” for example) is excessive.

We do examine class in considerable depth, overtly when we look back in the flashbacks when neither Elise nor James had enough to eat. It puts into perspective why Elise was driven to enter Mr. Black’s schemes in the first place – it’s easy to take the moral high ground when you aren’t hungry. But over that flashback we also have lots of nice, subtle references to how most kopides are not rich – how fighting monsters doesn’t come with a large pay check nor is it easy to fit around their normal work schedule. Too many action protagonists charge around killing monsters and their bank accounts just magically fill with money, or they’re independently wealthy or they’re lucky enough to have a job whose schedule is flexible (that they hardly ever attend either). In this world it’s clear that they have to earn their money – and the only reason Elise had any property at all is because she retired from being kopides. It, again, puts into context her actions as she tries to get enough money just to live on, even when it looks foolish or reckless.

After the introduction of the first book, this continued to expand the world, develop the characters and give us yet more hints about this fascinating setting. I can feel the bones of a truly wonderful meta plot building, I definitely feel the foundations of some really epic storytelling coming on as well (and the fight scenes in this book show that epic is a definite possibility and it should be well done). We have lots of hints – from Him to the Treaty of Dis, that there’s a lot brewing and this story has a lot more to give. It took the first book and took it to the next level – an excellent sequel and I can’t wait for more.