Death Magic (World of the Lupi #8) by Eileen Wilks 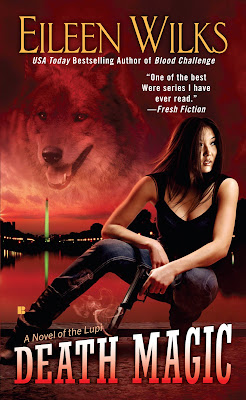 Lily Yu and her fiancé, Rule Turner, are again in DC trying to counter the political hate groups aimed at the supernatural – now fully being manipulated by the Great Enemy of the Lupi

The metaplot continues to be excellent as it develops more and more. A lot of the world building that has been building over several books is now all coming together. We have seen battle after battle, more and more revealed of The Enemy’s plan, her resources and her powers as well as we increasingly see what is truly at stake with this war.

Aside though – can we not have The Enemy be known as “The Great Bitch”. I get we’ve got a whole Voldemort “do not name her” thing going here but there definitely could be a less misogynist epithet they could use. Especially in a culture which is supposed to revere women and a goddess (well so it’s claimed: I find it dubious that we have such an amazing woman-revering culture yet for some bizarre reason all Lupi must be men. That’s a trope that ends yesterday) AND a culture made of actual werewolves – people who turn to dogs – denigrating their enemy by referring to her as a “bitch” is ludicrous.

This series has done an excellent job of bringing everything together and building incrementally with every episode. With every book we reveal more magic – the fae, the different gifts, the lupi, the supernatural forces, deities and powers, new creatures, new players, new organisations, the dragons, the complexity of people who can manipulate the future against people who can see the future and the chess game they can play. I love the layers and how much has come together in this book.

It sounds like all of these elements coming with a multi-sided storyline (Ruben being framed for murder, the hate groups being manipulated and acting against Rule, Lily and all supernaturals, dealing with the mantle Lily is holding and so many other issues) would suggest that this book is full and confusing. But it isn’t – it flows really well, there’s a lot of action but not so quick and action packed as to not cover and analyse the nuances there as well. It’s balanced between the plot moving forwards as well as examining all the elements that have been developing in this series.

All of this through the very excellent lens of the characters – particularly Lily. I like Lily, she’s such an excellent character – which has been very consistently developed. I love her dedication to the law, I love her logical brain and need to take notes and work everything through – her application to logic, sense and reasoning all to these fantastic circumstances are excellent

And I really love her conflict over the idea of a shadow organisation. She cares for the people involved, she trusts them. But the very idea of a shadowy organisation with no accountability horrifies her. I love her ethics, her dedication to them as well as how central her dedication to laws and ethics and accountability matter to her. I really like how strong and capable Lily is without being a classic combat monster

I do like some of the complexities of Rule’s faith. The Lupi being devoted to their goddess is a given, they’re created by her and have tangible evidence of her existence and intervention in their lives. But when one actually has a god who is definitely involved in your life… what do you do when said god starts doing things you disapprove of – or actively loathe. The idea that his god, his beloved Lady, is actually doing something that could harm or kill Lily creates the most amazing crisis of faith for him

It really is an excellent look at the real consequences of actually having a tangible deity – very common in fantasy worlds – and the price of that devotion. It’s an excellent complicated development of Rule’s character and the world building here.

Lily Yu is an East-Asian woman, lacking in many of the common stereotypes we commonly see concerning East-Asian women that I am aware of. This series continues to have multiple background POC as well – werewolves, different members of various groups (such as the police, the political groups) in minor roles who are POC and minor recurring characters like Sam Nguyen. The Rhej’s are very racially diverse and the most prominent Rhej (kind of high priestess to the Lupi), Ella in this book is a Black woman. She’s a fully qualified doctor but still takes advantage of people underestimating her because of her race. The new head of the Unit is a South Asian man. There’s a definite insistence that group scenes or groups in general are racially diverse. We also have Ruben and his family being openly represented as Jewish as well.

Lily challenges sexism around her whenever it arises – and it’s framed in classic microagression terms (like people discounting her skills). I also like there’s a moment where her own unfair snap judgement of a woman is challenged. This is something the book does well in general – just because someone is wrong or dislikes Lily or Lily dislikes them doesn’t make them inherently terribad. She also gently challenges Rule’s own sexism – taking issue with his willingness to help her when her arm is hurt while he tries to refuse her help when he is hurt.

There’s an element of this book which is going to be complex in the future – at some point Cyna’s daughter, a Lupi, the first female Lupi, is likely to have to go to the Clanholme during the time of her change. This is causing her dad, Cullen, to consider contraception methods for her (something that has not arisen before because female werewolves don’t exist) because they assume she will be sexually active. I’m glad to see that they’re considering their child’s sexual agency without shaming them – but at the same time I want to see where this is going to go with them assuming their child will be having sex at age 14 – but only with kids of the same age.

I am not happy with Ruben’s revealed to have elven heritage and a metal allergy – this has basically taken his disability, said that it’s inconvenient and handwaved it with some woo-woo.

Death Magic does continue another odd habit of this series – a Gay Maris. After many many many books of no LGBTQ representation, we had a belated and quickly passed over mention of the fact that the awesome Madame Yu and Li Qin are a couple (neither of which appear in the book but are mentioned – or have been sadly very involved since this revelation) and then a new habit: mentioning gay people. They will spend several paragraphs talking about a gay character who doesn’t actually appear; this has happened before in the series as well. This is not representation). Oh we do have a character that Rule decides to out as attracted to women (using his werewolf sniffing powers), decides this is why she respects Lily (because why else would a lesbian or bisexual woman be that impressed by an accomplished female mentor figure?) and also why she doesn’t Rule (because his super sexiness may challenge her lesbian identity. Oh dear gods straight man, no. No. Just really no. And like that’s the only reason this woman could even remotely have a problem with you – she finds you sexy and it challenges her lesbianness? No no no no no. And again. No. Stop).

This series is rapidly becoming one of my favourites – and it’s one that seems to get better with each new book and each new development in this rich, fascinating story and world setting. It had some shaky moments early in the series but it has excellently moved past that and have gone from awesome strength to awesome strength. It has one of my favourite protagonists, one of the best, richest and most detailed world setting and a plot that is both personal and epically meta-plot.