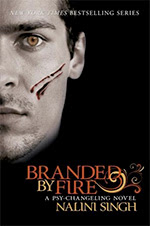 A Changeling research is captured – and it falls to DarkRiver Leopards and Snow Dancer Wolves to bring him back. They suspect, as always, the involvement of the Psy

But the Human Alliance is back in San Francisco with their very high risk, ambitious plan. While the Chanagelings may not be their direct target, the fallout can consume all of them

I love the ongoing world building of this series, especially the focus on the complex issue of Silence and the Psy

This has been something that has been touched on before in previous books but the focus has been very much on threats to the Changelings. To them and the Psy defectors, the broader societal implications of Silence are less important than surviving the latest shenanigans from the Council

But in this book the prime antagonist is the Human Alliance and their prime target is the Psy. The fact the Changelings are not the centralised target (though they are certainly are involved because it’s happening on their doorstep and something can’t happen in their territory without getting involved) means we can examine the broader implications of Silence falling for the Psy. Rising violence rates, the fact the race was desperate when it adapted Silence, the fact that there are a lot of Psy genuinely terrified of the damage they could cause without Silence. Silence is way more than just a threat to conquer, it’s complicated and involved.

And this book really brings home how important Silence is – and how collected the Psy are. Because of the Psynet, thing that individual Psy do can actually affect the Psy as a whole. We begin to address some really interesting ethical debates about whether the Psy should be forced to quit Silence, whether Silence is a viable choice, especially when we consider that for some Psy with genuinely dangerous and need Silence to function in society and to survive, or the fact that crime rates spiking can affect everyone, or that the Psy falling could literally destroy society. What about personal choice? What about if that choice is being affected by scare mongering rather than just reality?

On top of that we have a nuanced look at the Council itself rather than just seeing them as the antagonist with a few decent members. From the nuance of Nikita to simply acknowledging the integral role that the Psy play and even if you hate the system, burning it all down isn’t that helpful to anyone.

We’re also seeing more involvement from the Human Alliance; again we have nuance. We acknowledge that the humans are frequently seen as the weak ones, the extras, the forgotten of society excellently following on from previous books. I love how they find their strength and capability, how they work to match the more powerful races

I love the meta of this series. The complexities of the world and the politics, how the three different races relate to each other and how all of this is developing over the world. I like how the packs are growing, uniting and changing. I like how we’re seeing characters reoccur since too often in long running Paranormal Romance tend to fade into the background: there’s definitely still some element of that in this series which annoys, but it’s still good to see that Sasha is still around, her powers and abilities still helping shape the characters and story.

So we come to the relationship in this book. And this is usually the point when talking about this series where I curse and stomp and hate how this wonderful world setting and amazing metaplot and excellent twisting world building and politics all unheld by some intriguing characters is dragged into the utter mud by retrograde, rigid gender roles and romantic “heroes” to whom consent is beyond and alien concept.

And this book… well it does several things better.

Our love interests are Mercy, leopard sentinel and Riley, wolf lieutenant. They are both soldiers, both dominant, both in control. When he tries to treat her like a fragile flower, she vehemently rejects this. When he tries to make decisions for her, she’s beyond furious. When he tries to protect her she nearly calls of the entire possibility of a relationship with him

At no point is she willing to compromise this. She is a soldier, a protector, dominant, a leader. She isn’t going to let that go – not to Riley and not to any other men. She is in charge of her life and her role in her pack is important to her and she is quite willing to drop any concept of romance, perhaps any chance of ever being in a relationship at all, to keep that.

She also doesn’t need saving. Yes, there’s the undercurrent that she’s going to be ever alone, but that’s a separate matter and completely different from the female love interests in the previous books. She isn’t suffering some trauma needing the magical healing penis. She isn’t a Psy who needs a Changeling to stomp all over her boundaries and save her with a lot of unwanted groping. She has agency, she has choice and she is standing furiously against people trying to put her into a box where she doesn’t fit.

This is good, a definite improvement

But it’s not perfect, it’s better than the flaming garbage fire that has come before – but that’s a low bar to leap over.

I do have an issue with a lot of the underlying world building. Because it’s rich and broad in so many places that it’s extra irritating that we have these genderised roles thrown on changelings which seem that they should sidestep this. I mean, we have this culture where female warriors are supposed to be as capable and respected as the men, they’re as strong and skilled and even if they aren’t as common this generation, Indigo and Riley make it clear there have been times with more female warriors in the Pack. So why this “male predatory changelings are naturally protective of women”? If their warrior culture is equally open to both genders and both genders are viewed as equally capable then why would they have this “natural protectiveness” towards women? Why do Mercy’s father and brother give Riley shit to “protect” their warrior female relative – but none of Riley’s family feels the need to menace Mercy.

They’re both dominant – but why is she slightly less dominant? They’re both dangerous fighters, but he’s slightly more skilled. It’s even made clear that Riley’s wolf form is bigger than Mercy’s leopard form – I mean, there’s not actually any need at all to discuss which animal is larger. Why describe that? Why do we have to make it very very clear that even in animal form, he’s larger than her?

And why is one of the corner stones of Mercy’s problem that she may never find a mate because as a dominant female she can’t possibly mate with a submissive male? I know, I know personal choice and taste is fine – but none of the men decided they couldn’t possibly be with a woman who was submissive. This hasn’t been a chief concern of any of the men, it has never been something they’ve struggled with or obsessed over like Mercy does.

And it’s hard not to see this as one of the gender-based tropes that this book can’t drop. Even while it has Mercy break out of many of the patterns of previous books, even having Mercy challenge several, we still have these hangers on: Mercy’s leopard must be smaller, Mercy can’t be with a man who is submissive to her, Mercy must be less dominant, Mercy must face giving up her pack, not Riley his.

It’s sad that we have these bits clinging on because this series is badly in need of a gender role subversion. And it’s sad that I’m actually praising things like “hey, he didn’t keep touching her even when she told him to stop! PROGRESSIVE!” because that’s a terrible sign of my expectations for this series.

In terms of racial diversity, Mercy is of Brazillian descent though there’s no indication that she isn’t White or any sense of Latino culture about her character. Several of the previous characters that are in the books are OC as well – however they’re not as front and centre as they have been in previous books. Among the Psy and the Psy council there is still a large amount of racial diversity – the Psy are very racially diverse and the Council has Black and Asian members.

There continue to be no LGBT characters in this world.

This series continues to pull me in two directions. I love these characters. I really love this world, I love the development, I love the excellent world building and the nuanced layers we’re getting with every book. But in the middle of each book is a romance that always makes me cringe – though this book is a lot better than previous books in this series but, as I mentioned, that’s more a statement of low expectation than massive improvement.