Hunting for Spring by Katherine Mcintyre 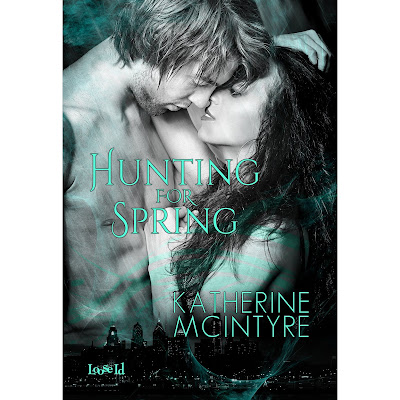 Conor is a hunter – but he’s never really followed in his father’s footsteps of cutting off all his emotional ties and his own sense of compassion. He cares – whether it’s about an injured dog – or a magical young woman definitely in need of help. Even if she does have her own secrets and her own agendas

And especially when there are far darker forces in the city: and his fellow hunters’ terrible methods of investigation

The foundation for this story is good.

We have an intriguing world with lots of suggestions of a broad world. And I do like a broad world with a wide range of magical beings all co-existing, especially if there is a sense of depth behind them. That’s always been something I liked. So this world with the many different kinds of fae (and I really like how many of these fae are presented as truly alien beings rather than pointy eared humans), the magic-users with their different powers and involved magic system. We have the hunters and their traditions and specific abilities and lots of hints of other creatures and other worlds

And I like the hints. This is, after all, the first book of a series, and one mistake many authors make is by deciding to push in their entire world system in their first book. Less is more when introducing a new book and new characters.

Hunters themselves have a beginning of world building. We can see they have some dedicated goals and they are a definite asset due to their training, drive and supernatural abilities in bringing down real threats. On top of that, I can definitely see – and think it was very well depicted – that Hunters too often see all supernatural creatures as the enemy

This does have a shaky moment though as we have a similarly awesome piece of world building. The presence of Seelie fae increases “art, inspiration and nature to humanity”.  While Unseelie fae bring disease, destruction et al. This is a really interesting concept and definitely adds to the world building. Except the hunters apparently know this – yet still treat all fae the same. It seems like a bit of world building that doesn’t quite fit or needs some more expansion.

One shaky element I found of this book was the relationships – because there’s a lot of telling and not a lot of showing and a lot of the conflict of this book involves Connor facing betrayal from his loved ones. To feel the tension of this book I need to feel Connor being torn between doing what he believes is right and loyalty to his father and best friend.

I can feel the sense of his growing relationship with Brenna, in fact I really like how they grow from initial hostility and prejudice carefully buried for a mutual goal, followed by mutual respect followed by a friendship which grows steadily closer. But it still feels a little fast and besides the point to a degree.

What does help is that both Connor, as a hunter dedicated to defeating supernatural threats as his raison d’etre, and Brenna as a half-fae who is directly affected and targeted by the activities of the antagonists in this book. Both have a motive to be involved in the plot which I really appreciate.

In fact, despite the relationships and romance, I really like these two characters and their place in the story. I like the story itself and the way it explores the world – the introduction of the witches and the fae and hunters all working together. I find Conor’s family and friends to be a frustrating distraction that don’t actually make a lot of sense – but when you look past them we have a much better story, an excellent world and some really intriguing characters. If this is the beginning of a new series this bodes extremely well – because with the original relationships settled we can now move on more

In fact, I am really irritated by this cover. Because Brenna and Conor being into each other is just such an utterly irrelevant part of this story – but the cover implies it’s the overwhelming point

Where it falls – while we have Brenna who is an awesome female character and good female witches as well, we have little to no other marginalised people at all: and there are more than enough characters here. The closest we have to the slightest nod to racial diversity is some background Asian people in a vaguely sinister Chinatown. And that’s it. No other POC. No LGBTQ people. It’s not great