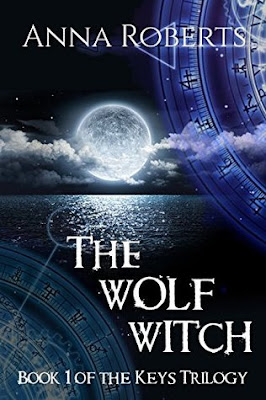 Blue has moved to the Florida Keys following the death of her mother, in an attempt to honour her memory as well as to rebuild her life after the devastation of Katrina

But she never imagined the tourist resort she moved to would have so many surprises and that her simple life would be thrown into some very unexpected turns as she finds herself embroiled with werewolves, magic, spirits and who knows what else.

There’s a lot of fascinating elements in this book, elements I really want to see explored. The idea of the wolf witches and their shared history and cross overs of persecution between the wolf witches and the werewolves themselves. I really liked the idea of magic which was much more visceral, more organic and far less sanitised than a lot of magic depictions we see. I was really intrigued by the witches relationship with spirits, those spirits being both a threat and an asset which leads to a very complicated relationship

I also really liked the take on werewolves. The actual return to the idea of werewolves as cursed. Werewolves who don’t have super healing and super strength and vitality – werewolves who have to deal with real health issues from the sheer trauma that changing inflicts on them, how that creeps up on them and affects their attitude towards aging and health.

That naturally leads to some personal conflicts based on that and on being risk averse. I’m also intrigued by the different paths to Alphadom that are presented – the easygoing, friendly, health alpha on one side and the brutal, vicious Alpha who rules by fear we see so often in the genre – but the book is nuanced enough to present flaws with both which in turn leads to more personal conflicts as people deal with the politics and repercussions of both. On top of that we have our own personal conflicts from other issues – like Blue being a Katrina survivor as well as the child of a parent with a severe mental illness and the repercussions of that and how that builds to her character.

This also all supports a number of storylines. We have Gloria, the elderly woman with potentially high ability, struggling with dementia with lots of difficulty of discerning if what she says and does is due to mystical insight or just because of her illness. There’s the power of what she means to everyone around her

We have the young wolf just realising what he is and coming in to his own. We have a power struggle, a conflict over how to hold a territory going through transition with the difficulty of following a very difficult reign and trying to hold the territory afterwards. And we have Blue and Gabe building a romance, in between Blue learning about the world and Gabe trying to juggle the many demands on him, trying not to resent them, trying not to be overwhelmed by them

These are all very excellent storylines, carried by some really good characters with a rather different world setting

But this isn’t a long book and that’s a lot of storylines and a lot of world to develop. So when I say up there that I really want to see x, y, z developed – I mean it. Because every one of these subjects gets a lick and a promise. We’re exposed to spirits and wolf witchiness but don’t get really expanded upon them. Or we get the struggle of the territory falling apart as the swamp wolves begin to rise up or the awkward reunion of werewolf teen and werewolf and… and none of these are resolved. Not one of them are resolved. There is no ending here. None of the world building is truly finished or fleshed out – it’s all beginnings. It almost reads like prologue, this is the book that starts the rest, but I’m not sure if it can really manage as a book in its own right. I’d prefer to see a book that cut out a few storylines and develop the ones that were; allowing the rest to come in future books.

Related to this, Blue felt out on a limb. As the complete human just getting to know the supernatural, she wasn’t actually part of any storyline at all, despite being the protagonist. Most of these storylines had her, at best, being an observer. On top of that it feels almost convoluted to have her inserted into the storyline – I mean I can see her relationship with Gabe, but having that pull her into the werewolf world and even becoming a carer for Gloria feels like more of a leap. She just seems to be on-site where stuff happens. It’s frustrating to me because the core is there. I could like this

Our protagonist, Blue, is a black woman and her race is both mentioned and part of her characterisation without being the overwhelming stereotypical element of her character. She’s interesting, intelligent, careful and interestingly curious of the world she’s been dumped in. She excellently refuses Gabe’s attempt to “chivalrously” keep her out of things or decide she needs to be protected or sheltered. Also she doesn’t feel the need to jump through hoops for a man – like last minute body shaving, he takes her hairy or not at all. There are number of other POC – but also clear indicators of everyone’s race. Many books do tend to identify the race of POC but then leave White people “unraced” as the default.

Gabe is also a POC, of Cuban descent, though this doesn’t inform his character to the same extent – his past history explains the disconnect between him and his Cuban ancestry. They do explore his mixed race heritage.

Less well done is Gabe’s awkward bisexuality – I say awkward because it’s really badly done. Gabe likes Eli, he obsesses over Eli, is clearly attracted to Eli in a really extreme way. But the way he talks about it? He talks about having threesomes with Eli and a woman so he could be close to Eli – but that’s it: he doesn’t fantasise about Eli, he fantasises about being with a woman with Eli. He doesn’t fantasise about any other men at all, though he is clearly aware of the attractiveness of women around him. There’s one scene where it looks like he’s getting all hot under the collar about a man close to him – but then he thinks entirely about Blue. This feels less like bisexuality than him being completely obsessed with just one man – and that an unhealthy obsession at that. In fact direct quote:

Which is explained by

His attraction to a man – the only male attraction we see – is dismissed as a childish obsession. That’s not a good depiction

We do have other more minor LGBT characters. Grayson is gay – but being gay and old and general assistant is kind of all we know about him. We have a bisexual woman, the mother of said youthful werewolf who is fairly present, but not in a hugely meaningful way. Both of these characters are not inherently bad but, like a lot of this book, there’s no space or development to make them into more. To make Grayson more than the character who follows Charles around while he sorts out the political mess, or Stacey be more than the guy’s mother and Blue’s co-worker.

And we have a completely unnecessary, utterly minor trans sex-worker – and that’s the entirety of her character. Random dropped stereotypes don’t make for good inclusion

Gloria is an intriguing character with a disability – her dementia is treated as powerful, tragic, yet at the same tome not completely removing her as an active participant in the story – but that’s largely due to woo-woo. But she’s there, a very constant character. We also have references to Blue’s mother with Bipolar. It’s respectful, meaningful, understands she’s a real character; her condition is seen as something that was difficult for Blue, but equally not used to demonise her. Though she is dead and her character is really there for Blue’s own development and history.

This whole book leaves me… frustrated. I like a lot that is here, I think there’s some excellent potential. We have a great world, some intriguing, novel and gritty concepts. We have some really good characters I really want to follow around a lot more – I’d be happy to see any of their stories. It has some excellent storylines that could be excellently expanded into some great stories. But there was too many mini-bits in too small a space – it needed to develop some aspects further, to resolve some elements rather than just try to cover everything with a brief touch not allowing some real development. As it was it felt unfinished, nothing went anywhere and everything needed to be more - a lot of my mark here is for the potential of what this book could be than the actuality of what it was