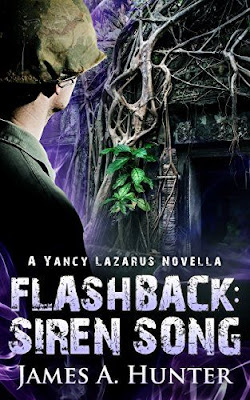 This is a flashback for Yancey, back to the days when he first learned he was a wizard: in the rainforests of Vietnam, surrounded by enemies, fighting for their lives and facing the sirens. And an ancient force far more deadly than even the modern battlefield.

For a time in this book I was vaguely frustrated

Not because I wasn’t enjoying this book – because I was. Not because it wasn’t well written – because it certainly was. It has a great sense of grimness, that classic Vietnam war-film feel all grim and gritty and normal people completely out of their element, fighting a nasty, terrible war far beyond their experience and what their training prepared them for.

Yancey’s extremely well portrayed, I can feel him, his anger, his sadness, his loss, his struggle. I can feel the camaraderie of his team and why that makes what the Siren’s music is doing to them extra painful and soul destroying.

The quality of the work, the writing, the style and the whole theme and feeling of the story is excellent

But I’ve read it before. I mean, one of the major elements of one of the books is Yancey confronting the sirens, arguing over what happened, demanding revenge and dramatically announcing exactly why he was so angry with the sirens

So I knew this story, especially since the parts that were added were classic Nam movie fiction that while it was all very thematic and atmospheric it wasn’t really adding anything. It was a fun read but then I asked why I was reading it, what it added to Yancey’s story

Especially since this was Yancey’s opening to magic but contained very little magic or wonder. And that makes sense, they’re in a war zone under constant threat. There’s a level of “just roll with it and keep moving” that simply has to apply here, no arguing that. But it’s another storyline that this book could have explored that would have added so much to Yancey’s past that wasn’t. I understand why it wasn’t, it wasn’t the time – but why this book

Then we got the answer with a big epic story about a Leshy and his plot to cause untold suffering and the noble and brave Gregg and Rat and Yancey willing to sacrifice everything to stop him because ultimately they may not be skilled or magical or powerful and they definitely have not the slightest clue what is really going on – but they know it’s wrong, they know people will die and they know they have to stop that

And it’s big and noble and epic. And, on the face of it, a good story – I want to say that again and again about this – it’s a good story, it’s well written, it’s atmospheric with some great characters being portrayed. And it’s a Vietnam war story without demonising the Vietnamese.

But… but why is there a Leshy here? A Slavic tree-creature… why is this here? In Vietnam? I’ll admit right off I know nothing of Vietnamese folklore – but I’d be surprised if a culture that grew in a land with substantial rainforests doesn’t have a few woo-woo nature/forest/tree beings of some kind in its folklore. We could have had that rather than a geographically challenged Slavic Ent.

But… but this is an epic world destroying monster and… really? Even when he’s an utter baby wizard in a novella he still has to face the epic epicness of epic? Is this Yancey’s life? Can he go to the local shop without solving and apocalypse and stopping a demon uprising?

There was also a decided lack of any kind of minority characters as well.

All in all it was a good book, but I don’t think it’ll rest in my mind – there’s not enough added to widen it into the world, it adds texture and history that is already here, characterisation we’ve already covered. It’s still fun to read