Under a Blood Moon (Death Witch #1) by Rachel Graves 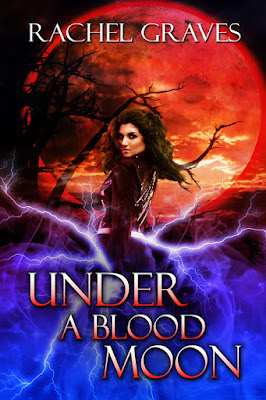 Mallory is a death witch, the only one known. While this has left her with a painful past, it gives her skills that makes her a utter asset to the police

And far more so when zombies seem to be running a protection racket. But it’s far from that simple when you have voodoo, werewolves and an ever growing death count needing Mallory to unpick it

I really like the opening of this book and how it establishes Mallory. We see the tragedy, the horror, the deep sadness and the pain of her – but unlike so many characters that have The Tragic Backgrounds ™ it doesn’t consume her characters. We do not get repeated depictions of her mourning and no great big pits of angst. It definitely shapes her, what she is, her power, how she views it – but it doesn’t consume her. It is not all she is or even a hugely significant part of her – but it does go to making her. She’s a character with layers

I think she bounces well with her partner Danny – they work extremely well together and fit well with the job as well. We see how her magic works among the mortal police – we see the opposition she faces, we see the usefulness and acceptance without it entirely replacing actual police work and it all comes with decent friend interactions which are fun to watch and manage to convey a lot of information without completely unnecessary infodumping.

Similarly it’s don a really good job of incorporating the supernatural into the greater world in a very seamless way. I especially like how there’s no attempt to make the supernatural vanishingly rare with witches actually making a significant portion of the population. I’m curious to see how that develops. I love the different kinds of witches, how the gods are related to that and the suggestion of so many other supernatural beings.

I really liked the plot – the whole investigation was nicely twisty with some excellent complexities, some really good red herrings and a great reveal. I liked how they investigated, I liked how they had down time above and beyond that. Yes, she’s a police detective, but she still has friends, she still has a life, her job isn’t everything she is and everything she does.

There’s a lot I like here – the writing, the characters, how they relate and I really love the world setting and the story

I don’t like Jakob the love interest and not just for the reason I mention below. I don’t find him very engaging – I mean I really like the idea that he’s a cook and revels in the food options of the modern world. I love this idea, it’s an excellent take and one of the things that makes this book fun. But every interaction with him is basically sex. Lots and lots of sex which gets very dull very quickly.

The way this book treats voodoo is interesting. I started a scathing criticism of how voodoo was portrayed here as the religion was repeatedly demonised. But as the book develops there’s a nice twist here as we see not how much voodoo is treated, but how voodoo is being scapegoated. It’s an excellent depiction of how demonisation and bigotry can be exploited and used – as people are too eager to follow their own prejudices than see the truth which is a really excellent point.

The book opens with a large immigrant community which is generally portrayed very positively while also acknowledging how vulnerable they are; largely Hindu Indians but a noteworthy Latino werejaguar, Indigo, who is definite character with a decent role to play in the story. Also he’s a chocolatier. A very good chocolatier. You have to love a good chocolatier. And I think it’s kind of awesome to have a wereanimal chocolatier – how often do we see wereanimals in anything close to this kind of role? He is a definitely significant character

Mallory’s boss is a Black man. There is an element of promotion to obscurity as he doesn’t play a huge role. But we also avoid that most annoying of tropes – the boss of the police detective who hampers them and fights them every inch which I’m glad to be missing. Among the police we also have a Native Hawai’ian air witch who is not a major a character but isn’t vanishingly minor. While the two main characters are white, there is a definite effort to include racial diversity around them

I also like her female friends – she respects them, she likes them (which is sadly rare) and they are very different women, including very traditionally feminine women. We have women who love clothes, women who love partying and dancing (including a larger women who can dance up a storm) and a woman who is overtly and happily sexual and not even slightly judged or shamed for it, regardless of her choices. She lives her sexual life with the whole support and respect from her friends. It’s a wonderful thing and deeply sad that it’s not more common. No slut shaming. No women hate.

Mallory’s history also has an excellent depiction of depression and how she lived during her marriage with her husband. It is a really excellent characterisation with some insight in how “being looked after” isn’t always helpful

But there continues to be some issues that make me less comfortable with diversity in this book. We have the usual tropes of appropriation of “coming out the closet” and the werewolves heavily appropriating marginalised movements

The problem is that when we step beyond the fact these are werewolves using these arguments, the werewolves actually make some really excellent, if shallow, arguments about how marginalisation, disenfranchisement, persecution etc can destroy a community and need to be considered when looking at things like crime, policing etc. They’re really good points – and they’re being made by a group that turns out to be evil rampaging murderers with Mallory, our wonderful protagonist, sneering at their arguments all the time.

Oh, she also shoots down the idea that she feels lonely as the only member of her group because she doesn’t “think of herself as a witch first and a person second” oh, yes, catch that attack of “marginalised identity”.

We also have some real issues about this books representation of LGBT people. We have one lesbian character – and she’s definitely powerful and skilled and non-stereoptyed: but she’s also desperately, painfully pining over a straight protagonist, desperate to be loved by her and devoted to her through it. She’s desperate and tragic and painful because she loves someone who will never love her back. It’s a terrible trope for LGBT people that is repeated far too often: the desperate heartsick lesbian/gay man fawning and hopelessly tragically begging for straight love.

But this pales next to the description of gay men. Mallory’s love interest is the vampire Jakob. When he was turned he was raped by a gay vampire/paedophile: both are pretty much used interchangeably. This vampire raped male children or male adults and Jakob was just the oldest. This rapist gay/paedophile is the only representation of a gay man in the book and is used to defend Jakob’s utterly virulent homophobia. He is repelled by gay men:

“He can’t stand to be around them, refuses to think about them, and is filled with rage when one happens to bump into him,”

This vampire, capable of easily eviscerating humans, is filled by rage because a gay man accidentally comes into contact with him. Not this is not justified by his past, this is utterly inexcusable and the fact that Mallory then passionately defends this raging homophobia; and we’re expected to agree with her

Let’s be clear, I’m never going to agree with the violent raging homophobe with a past record of murder who may be set off in a killing spree because a gay man brushed past him. And the whole “gay men as sex predators justifies hate” – well that’s the gay panic defence. Used in court to defend homophobic murderers over and over again. This isn’t inclusion. This is toxic. This is outright dangerous.

We have representation, but Mallory is one hashtag away from a diatribe against “Social justice warriors” and “special rights.”

On a nitpicky note there are also weird moments in the book that just seem bizarre, especially since they’re such throw-away lines. Like she describes Jakob as “almost short.” He’s 5’ 11”… this is short? Or a woman is described as being called “Jessa” because she’s English. Jessa isn’t an English name. Or Danny describing how his Irish immigrant family couldn’t find a sense of community that the Indian immigrants they found did – I’m going to need some more information about Danny’s situation and why they can’t integrate before you convince me of the rarity of Irish-American culture.

In the end here I’m in a Predicament. I liked this book. I liked it a lot. I liked it almost to a 4 fang level. Then we had the little issues, then Mallory decided to pull the anti-social-justice-warrior lines and to top it off we had the paedophile-gay-man-rapist-justifies-violent-homophobia and we hit a full scale NOPE.

I still enjoyed this book but I am also, frankly, pissed that I was subjected to this bullshit. And it’s so utterly unnecessary – this didn’t have to be there. His book could have been awesome: yes, it’s an Adele.