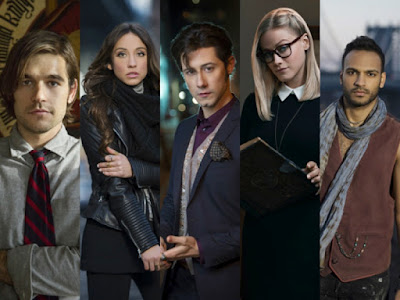 Three main storylines here – the first is Quentin. He has returned from enforced normality, alas, to try and be relevant still.

He is convinced Alice’s Niffin (magical overload creature thingy) is still out there and alive – or possibly her ghost is out there. He decides to do some magical interpretive dance which doesn’t summon her so instead he decides to go visit Alice’s parents and her memorial

Ok, this is supposed to be all about Quentin and Alice and Quentin discovering her while her parents are just awful but, while that is all true, there’s another element that isn’t touched on: how terrible Quentin is. His guilt and grief means he decides to impose on Alice’s clearly deeply hurting parents – he demands they do things they don’t want to, tries to make them face things they’re not ready to. His grief, his pain, his need for absolution or to wallow in his guilt overrules anything Alice’s parents want

When he visits the memorial he has apparent interactions with Alice’s ghosts, a book (do we ever learn what is in that book? I don’t see it) before Alice’s parents drag their eccentric selves around for a while. After playing with pyramids with daddy and destroying mummy with her own self-absorption, Quentin finally comes face to face with Niffin Alice

And she’s alive. The Cacodemon wasn’t strong enough to destroy her so instead it imprisoned her: in the tattoo on his back. That’s going to be messy.

In Fillory, Penny shows up looking for his moss with Elliot flailing around trying to be comforting but basically being ineffectual. They’re visited by the leader of another nation, Prince Ess (yes, so we can make jokes about his name being “Princess”. No really. This is the level). He’s pissed off that Fillory fails so badly (which they do) and he wants a treaty which grants them equal access to the wellspring they all rely on (understandable) and the marriage of Virgin Queen Margot to Prince Ess

Margot objects most strenuously to the virgin part.

So The Lorian’s respond by apparently teleporting the whole castle to Loria (to the “Cockbarrens” because of penis shaped rock formations. Yes. Really) and holds them hostage until they agree to his demands.

Elliot does ask if Margot has considered marriage – after all, he had to. Not only that, he, a gay man, married a woman and thank you show for finally recognising a shred of how awful this is. A shred. Don’t worry they walk it back later

Elliot also learns that Fenn once was part of the Foo – the anti-Earthling activists – and knew the guy in prison. This is an excellent part of Fenn’s characterisation pointing out she is Fillorian, she’s far more invested in helping Fillory than Elliot has ever been and she wants to make their kingdom work. Of course she was also part of a group she insists was non violent yet just tried to strangle Elliot – which means he is now married to someone he cannot trust who may murder him.

This means he realises how appalling it is for Margot to have to do the same. Which is excellent. But then says how much he likes Fenn despite the risk, the fear and the complete violation of his consent and sexuality. This is so we can see Margot as managing to dodge his awful fate – which is excellent – but still downplay his awful state so we don’t see the terribleness of it.

Margot does confront Prince Ess and he wants a nice submissive silent virginal woman and boasts about how awesome all the submissive women he’s had sex with are. So she fights back by having awesome aggressive sex with him.

Ooookay. Yes I get the idea that he’s proving that a passionate, sexual, equal partner is far better than a silent submissive woman on whom sex is imposed. But at the same time “I’ll prove the misogynist who is demanding to have sex with me a lesson by having sex with him” seems more like a straight male fantasy than a feminist statement.

Penny drops around and his ability to teleport everywhere means, with the help of the cartographer (who I am beginning to kind of love, to be honest) he quickly discovers that the Castle hasn’t gone anywhere –it’s all a grand illusion

When revealed, Prince Ess and his party look ridiculous and humiliated. Margot takes great pleasure in rubbing that in. Then declaring war. Elliot is not thrilled

This is when Margot goes from being the harsh but tough ruler to increasingly more unstable an unwise. Which is a special shame because this was supposed to be Margot fighting back against misogyny, especially as Fenn becomes more and more awesome.

Let’s address Loria here. We have POC in classic barbarian clothing (or, non-ironic fur as Margot puts it) espousing extremely misogynist beliefs and attitudes. Why not just call Loria “The Savage Lands” and have done with it? This is one grand racist shit show of a trope. They even end up being utterly ineffective relying on desperate trickery.

The cartographer is still awesome

Back in the real world, Julia and Kady use cunning and research to track down Dana, the woman who banished Reynard before. Julia goes in to visit her and everything goes wrong. They begin by bonding over similar experiences and their wish to kill Renard and that they both became pregnant after being raped – and both tried and failed to abort the foetus.

Then she hits Julia on the head

The key to banishing Reynard is to use a lot of power. And where do you get that power? The birth of a demi-god. Yes, if Julia wants to banish Renard, she can’t have an abortion or commit suicide. And, yes, Dana’s baby is alive and well – and knows nothing about her or his heritage for her safety so Renard can’t find any of them. She has also captured and kept a human-like creature called a haxenpaxen which has a stealth power – Julia befriends it. She’s kidnapped Julia because she wants to make sure Julia will definitely give birth to the Renard banisher

Which is when Kady shows up, riding to the rescue. Dana’s house is heavily warded against magic but not against Kady’s fist. Go Kady. They leave, taking the haxenpaxen with them…

So Renard can find Dana