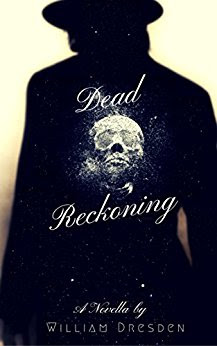 Jesse is a dangerous man. Armed with the Reckoning he can hunt down almost any supernatural creature

But even he was surprised by what he uncovered when he ran across a Limikkin when hunting a cannibal.

This book is a novella. It’s a very short novella as well – and I’m just confused by the whole thing

We have a western setting and our main character is Jesse. He’s a… gunslinger, vigilante, mercenary? I dunno, guy in western who hunts things down for money. Or possibly for some ulterior motive. Either way the stuff he’s hunting seems to be supernatural. Whether that’s a habit or one off… I’m not sure

And his family has been killed by some big bad at some point? And he wants to hunt that down but it’s kind of referenced in passing and… I don’t know because it’s not developed?

And then we have a really long card game where he decides to shoot someone and I’m not only bemused as to why any book feels the need to go into this much detail about a card game, I’m further bemused as to why any book this short would feel the need to dedicate this much time to a card game and bemused yet further still that it’s so out of place and ends with a killing which probably is relevant to something huge in the author’s mind but I have no clue why it is here. He just killed another gambler and I have a vague idea that the guy is not a nice person but… why? Why is this here?

He has this power called “the Reckoning” which is like burning things with magical wrath. I don’t know why he has it how he has it what it means or… well… anything. He’s also really old and really dangerous which may be woo-woo or may be because of the family-killing-tragic-past-moment,

Aaargh, this is this entire book. There’s lots touched on but nothing is explained or developed. Is this not the book? Is this actually like an excerpt of a book, like the sample you can get off Amazon sent to me by mistake?

We do have a plot that isn’t bad and is relatively closed. We have a fight an enemy, a rescue and then a twist at the end. The twist isn’t entirely novel

But it comes with a lot of related confusing elements – because he goes on this hunt after someone without any real explanation to pick up an item without any real explanation. This ends up with him rescuing a woman which doesn’t require explanation beyond, y’know common decency. She has had a horrific time and he’s kind of a Tropey Arsehole tough Guy Who cares Really – y’know a Wolverine (though, if you think someone has been held prisoner as a sex slave, can you not spy on her when she’s bathing? In fact, don’t spy on her when she’s bathing anyway, but to build on that further by doing it to a recent survivor of sexual assault? No. No no no way to make it worse). Once we’ve embarked on this storyline it’s not bad – it has interesting elements, a nice twist and you can kind of ignore all of these plot elements I know nothing about on the vague assumption that they will be explained at some point (they’re not.) If we could cut everything else away to use in an extra book and focus on the rescue + twist (with added bonus for a much more obscure reference to a Native American mythological creature). It’s not amazing – and it is plagued by these extra elements (he reads minds when he kisses women?) and it has some really stilted yet over-elaborate writing that isn’t my favourite.

Then in the background we have some Native Americans, a gate keeper, a big shadowy demon thing and I have no idea what this means because it’s clearly from a longer book and had no real place here without a whole lot more explanation

But as a book? It’s only half there. I would be quite annoyed if I had bought this book and realised that the rest of the book isn’t here and it really screams excerpt, not full book