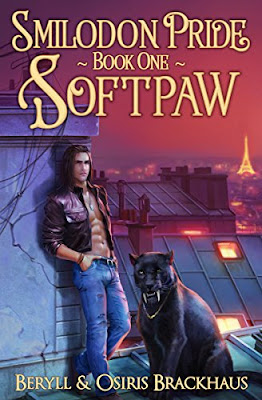 Connor loves Paris and revels in his beautiful life in the museums of the city and the streets of Le Marais – and he’s always ready to take in waifs and strays who need shelter, good advice and a warm meal

But when these gay sex workers are targeted by a serial killer, Connor’s not going to stand aside and if he catches the serial killer they’ll find there’s another dangerous predator prowling the rooftops of Paris.

While Michel is an undercover cop, ideally placed to infiltrate the killers victims – being a former sex worker himself. But can he lure in the killer without falling into old, destructive habits?

Like many paranormal romances, I find myself a little frustrated by the fact actually hunting down the serial killer takes a very big back step to the romance. I don’t know how much Michel actually spends investigating the murder at all… I mean other than walking the streets looking sexy I can’t really point to anything Michel does to actually hunt down the serial killer. Michel does little more than move in with Connor and then repeatedly fall asleep instead of doing his job and then destroying evidence. Connor does more, but even he gets heavily distracted.

I do actually like the romance, I think it has a lot of positive elements, is nicely based, has reasonable conflicts and is generally something I appreciate – but it’s hard to be that invested in it when there are men being murdered and that’s pushed into the background.

I am somewhat bemused with the idea that the police are under so much pressure from the powers that be to solve this case right now! The dead are sex workers, homeless street walkers, gay men and, at least some of them, immigrants, possibly undocumented. The powers that be being passionately outraged about this does not match up with actual official reaction to the deaths of any of these groups, let alone men who straddle all of them. I think it would have been much better to focus on Judge d’Angers, a clearly deeply involved woman (in what we don’t know yet) who could be driven by her own moral code (or other motives we’re not yet privy to).

I really like Connor and Michel here – they’re fun characters, they have hobbies, histories and depths. I like how they grow together, I like how they come to realise more depth. I like how Michel relates back to his previous life but is happy about how far he has come and is very confident as to risk everything to prove himself. I like Connor, his life his dedication to art, his existence, community and friends.

But I really did like to see Connor stalking the houses of Paris. And how that isn’t quite as easy for a big cat as we often see depicted

And we have a book with two gay characters who I actually like and whose relationship doesn’t annoy me! This is wonderful and so beyond rare. I can’t stress enough how very very very few books with gay male protagonists I’ve read for Fangs and how many of them (or books submitted to us we didn’t read) had Problems.

The problem is the focus. I mean, this book takes part in the very gay-friendly neighbourhood of Marais (I’ve been, it’s AWESOME). And most of the characters are gay. Which is great, definitely approving. The characters are also not terrible, generally not troped in MOST ways. There’s a lot of good here. It’s certainly a lot lot lot better than nearly every book with a gay male protagonist we’ve reviewed on this site.

And they’re all sex workers. Oh, one of them runs a club that caters to sex-workers and offers them freebies so long as the elderly owner can get him some under-aged groping and the other, our co-protagonist is guy-with-heart-of-gold who likes to save sex-workers (and the reason you don’t have many romantic relationships Connor is because you don’t seem to have any gay men in your life you don’t view paternalistically as some poor wounded flower for you to save!)

I’m not saying we shouldn’t have sex-workers or gay sex-workers in a book – by all means do, this men exist and are rarely depicted (outside of porn) – but when your gay romance book with nearly all gay characters (with occasional female gossip hangers on and straight colleagues) taking place in one of the gay capitals of France and the only gay culture and gay men we see are sex-worker related? There’s no counter narrative or even parallel narrative. This continues when we look at Michel – an undercover police officer who can’t even attend a professional meeting with his boss without wearing trousers so tight you can tell whether he’s circumcised. I nearly put the book down when he finds evidence and promptly ruins it by masturbating over it. Yes, evidence is inadmissible because the cop finding it couldn’t resist ejaculating all over a blood stained shirt in a serial killer enquiry. I honesly have no idea how to even respond to this?! Yes there’s an attempt to present Michel struggling with his past and demons… but really? Really? We need to make the gay men THIS sexualised and THIS sex obsessed? Throw in Connor’s slut shaming and paternalism and the positive array of vulnerable, exploited damaged gay prostitutes and this… focus is a pretty unpleasant lens

Which is a shame because I like these characters. I like how they grow. I like their romance. I like how Michel battles with some of his old demons and grows to appreciate himself, his life and Connor more. Similarly I like how Connor deals with his issues relating to Michel, his own relationship issues as well as the revelations around Michel and how this affects their relationship. In so many books this would lead to some really ridiculous conflict forced however they can but instead there was a decent level of maturity in handling it.

Connor is a mixed race Man of Colour, with Latino and Native American ancestry. One of the major characters who is Michel’s chief contact in the police is Said, a man of Asian descent. All do reference their culture and ancestry though I suspect Connor’s is going to be used as a way of referencing his woo-woo. There's also a bit of a weird moment where we have an elderly racist woman making an exception for Connor as one of the good ones and... why is this here? He doesn't even call her out or think bad things about it? We didn’t have much real presence of women – we had women there and their brief appearances were all interesting but also really brief. I already mentioned Judge d’Angers who is clearly dedicated and involved – but also brief. Connor has a couple of female friends who may be interesting – but again it’s a really brief appearance

There are some good parts to this book – we have an interesting supernatural world with some definite high potential which really needs exploring and instead i just far too igniored. We have some really good central characters- but the general focus on gay men in this book needs to widen really really badly to provide some counter narrative to the excessively-sexualised, broken and vulnerable narrative here. And both character's seeming indifference to the actual murder is just horrendous. The romance is interesting but completely eclipses the plot and the world building to the extent that they could actually be removed entirely - AND Connor's supernatural nature - and not unduly change the trajectory of the book. In the end the romance and these characters would work - but they've been stuffed into a world (both supernatural and real) and a plot line that is poorly shown and too often ignored. And I'm torn - I've changed this rating between 2 to 2.5 and then 1.5 and back again 4 times... and I'm still not happy. This could have been so good... and I think my 2.5 is rating on what it could be and ignoring the tropes, the terrible incompetence and completely ignoring the storyline