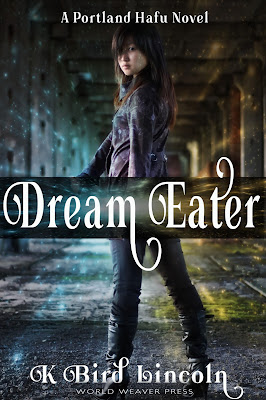 Koi can read other people’s dreams – it’s a curse she’s had from childhood; a curse that brings consequences every time someone touches her. It’s made life almost impossible, but she’s finally getting it together… though she’s not ready to look after her father with Alzheimer’s

And then Ken comes to town and he seems to be carrying a whole lot of mystery with him – and one of her university professors has some terrifying dreams. And he’s fixated on her.

I can’t say I’m a huge fan of Koi. There’s a lot about her characterisation, her struggle, the affect her power has on her and how she is struggling to make a life despite that often in the face of scorn from her sister.

I really think her experience is closely related to disability. She struggles a lot with daily life, crowds, dealing with people and in general making it very hard to go out, shop, go to school. At the same time she is criticised sharply and condescended to by her sister who doesn’t understand why Koi can’t just do better – not knowing what she has to struggle with and just seeing her failing.

I like the nature of Koi’s power as a really unique element that I haven’t seen in many places and Koi’s experience of them is a good element. She does have a tragic-dead-mother and a father with Alzheimer’s – but while both weigh on her and shape her character, she isn’t consumed by it. They’re not used as quick and lazy characterisation for her, they have meaning, they’re actually shaping her

Unfortunately while I like these elements, Koi herself tends to annoy me. One of that is unfortunate word choice. Authors ”said” is an acceptable word – stop looking for synonyms.  In this case, stop using “snapped”. Koi seems to be constantly snarling and snapping at everyone around her. And I don’t know if this is intentional or just bad word choice. Especially when later, Koi decides she absolutely has to put herself at risk because she wants a burrito. And maybe that would make it a little better if we’d better establish how much she needs to eat after using her power.

It doesn’t help that I really don’t like how she interacts with Ken. It seems to bounce between over the top unnecessary sexual attraction (which, yes, I get it – Koi’s power means she can’t touch people easily so meeting a guy she can kind of touch without consequence is a wonderful thing. But my gods that’s an overused trope!) and then back to really excessive antagonism which feels like someone has decided to take a long love/hate attraction storyline, speed it up and shoe-horn it into the story.

But we keep circling – Ken assumes Koi is lying to him so doesn’t explain things. She assumes Ken is kind of weird so doesn’t ask questions. And they just keep circling for a waaaay too long for the first half of the book without answering the obvious questions.

But I do like how we are introduced to the supernatural in that not everything is explained to Koi. In particular we learn that the supernatural inhabitants of Seattle Portland have some kind of beef with the organisation that Ken is part of. I love the clear philosophical tension that is repeatedly referred but never entirely explained. And it shouldn’t be – clearly there are lots of issues concerning “purity” “being tainted” relationship to humans, killing and not killing, territory and snobbishness. I like that we’re touching on the hugeness here – but Koi is clearly not interested because she wants to rescue her father and sister. She doesn’t have the time or inclination for a history lesson. While Ken and Kwaskwi are clearly not going to lecture us on past issues between them or the underpinnings of their society. It would be extremely weird for them to have a time out for world building.

What was also really interesting is how, because of this, you had two forces very much at odds while, at the same time, neither side is particularly defined as wrong: not like the antagonist

So I like that- it kept the pacing moving, it hinted on a vast, rich world that I’m really interested in exploring which is bound to pull me in for more books even if I don’t care for Koi and Ken.

And I really liked the world building that was revealed. I loved that it drew a lot upon the mythology of Native Americans and the Japanese without resorting too much to the usual stereotypes. We had no skinwalkers, no Wendigo, no Coyote (and they’re like the trifecta of all Native American representation regardless of tribe or location – and, yes, this book actually made a point of speaking of the Siletz rather than native Americans as a generic place setter) and, ok we did have a kistune because there are ALWAYS kitsune, but Koi, a Baku, is definitely not something we see often in fiction.

I loved the idea of the Kind, the supernatural, being influenced by humanity and even trapped in stories – which is a really fascinating concept and adds to some very poignant motivations. And I really like the magic system which was really unique and fascinating idea connected awesomely with dead languages

In terms of POC we had a lot – the aforementioned Siletz characters where present in large numbers but not people we got close to. Koi is half-Japanese and Half-Hawai’ian but I’m not sure if she is Native Hawai’ian; she has a middle name in the Hawai’ian language but her physical description is only that she’s not instantly recogniseable as Japanese which may be more this trope. Ken is also Japanese and we have Koi’s father and sister; Japanese culture (food, language and representatives of a small ethnic group) seems prevalent with Koi and her sister without the portrayal feeling too much like someone’s read waaay too much manga and is pushing in all the tropes or making these women born in the US not feel like women born in the US

I would have liked her sister to have been more present and less of a damsel. There are also no LGBTQ characters

I’m intrigued by this world setting, love the concepts and want to read more. It’s original, it’s interesting and has a lot that pulls me in

I’m just not entirely sold on Koi and Ken.