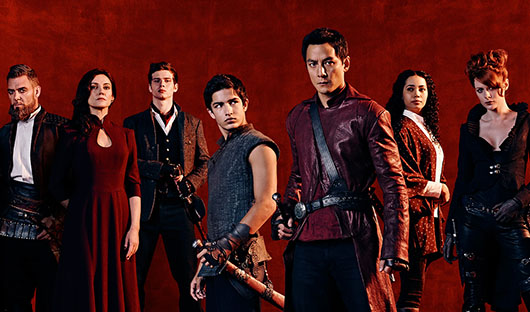 Time for Into the Badlands to return and it opens with stunning visuals and good music. No matter what else this show is, it’s a sensory feast – a truly beautiful program – 6 months have passed since the end of the last season

Even when following Sunny who has been sold to slavers who are “mining” (prospecting for remains of our society anyway) and we’re quickly treated to an awesome fight scene showing off the glorious battle choreography. He doesn’t escape but my does he look awesome being recaptured.

Chained and set to work, Sunny meets Bajie, fellow prisoner, crafty opportunist who offers to be his guide in the prison being a confidant, teaching him the rules (including needing to meet your quota or face lethal gladiatorial combat – oooh Sunny is interested in that). With Bajie’s help he begins to put together an escape plan. But we also see Bajie is ruthless. He repeatedly calls himself an opportunist but we see that also involves a willingness to attack and use his fellow human beings.

When Sunny makes it clear that Bajie is not part of his escape plan Bajie makes his own plans – and sells Sunny out to their captures as a clipper and therefore someone valuable.

MK was kidnapped by some monks last episode and is now being trained by an Abbot in combat and presumably control. He’s a bit sulky and pouty, demanding to speak to the Master. Normally I’d roll my eyes are whiny acolyte demanding to be treated as all special but since he was actually kidnapped I’m going to give the guy a hard pass here. It’s not like he signed up for this

One of his fellow supplicants also wants to escape – he wants to return to his Nomad tribes where he was respected and worshipped for his power. Yep, they all have the lethal fighting power when they’re cut: his fellow nomads used him as a weapon to protect themselves. Apparently too many cuts will eventually kill them but he considered this a small price to pay for his own people.

She will allow this if he can get past a paper bird with sharp edges without using his powers. It’s nifty Origami – and opens a shallow cut making him go all dark-eyed and scary. He attacks her – and you know that’s not going to work. She stops his super powered punch with one hand and then with some carefully applied pressure points she puts him on the ground

He’s staying. And yes he’s a prisoner. But he’s also a man who turns into an unstoppable killing machine with a paper cut so you’ve got to look at the whole “imprisonment until you stop being a portable nuclear weapon” thing in a somewhat different light.

Even the super-awesome Master isn’t untouched – stopping that punch gave her a really painful looking compound fracture in her arm. Ouch – but then she shows she’s still super-awesome and heals it. Lots of woo-woo here

She also takes over MK’s training because MK has shown some rare sense. Rather than assuming The Master knew all about his life because she was using woo-woo he realises he’s been spilling his guts to Eva, his abbot, and she’s been tattling. I agree that this is a pretty fundamental breach of trust and I’d be pissed if I were MK – I also am absolutely bemused that he would be willing to extend that trust in the first place

Everyone’s least favourite character Ryder is doing well for himself, controlled like a puppet by helped by Jade, his new wife who isn’t Margaery Tyrell. He now controls 3 baronial territories and everything is awesome

Sort of. He still has daddy issues out of the wazoo and his oil production is being hit by lots of deserting workers. Jade keeps giving excellent advice though showing she would be a vastly better leader than just about everyone.

And the Widow wants her land back and has Tilda and her Butterflies unleash some nice explosions before she goes on an utterly awesome killing spree, carving her way epicly through Ryder’s guards (did I mention the fight scenes are beautiful? Because they’re beautiful) until there’s only Jade left to hear The Widow’s message. This land is hers and she will slice and dice Ryder to keep them

The Widow is building a large following of people – abused people from the other Barons, dolls and cogs and clippers who almost can’t believe in her dedication to equality and freedom and treating people decently. Including giving people the right to leave (people are serfs under the barons). She even lets several men go who think she will be destroyed by the other Barons

And we close by catching up with Veil giving birth… and Quinn playing midwife. Ok that was unexpected

In all we had an episode that brought us excellently up to speed while maintaining the glorious aesthetics that really makes this sow. An excellent re-introduction.