So Fillory. As Margo put it, it’s lucky they don’t have polling in Fillory because this is a hot mess of awful with their army deserting because of the mass tree killing, the treasury still kind of empty and magic still cutting out because Ember shit in it. This is looking pretty terrible.

Except there turns out to be one loop hole – rather than a war they can have a duel between kings! And it will make them super popular – as Margo puts it, Eliot is already seeing the statues.

Except he can’t fight. And the king of Loria can.

This is a bad idea. They quickly brainstorm for other possibilities and come up with magic: namely, Fenn’s blacksmith ancestors have a sword and spell that was especially prepared for High Kings who didn’t really want to go to the effort of actually learning how to fight. This goes along with a big speech from Fenn about how her husband and child are all important and her family (reminder again about how not into this Elliot is)

He’s still nervous though so it’s over to Margo and her spell which makes everyone have an impromptu Les Miserable performance.

Ok, time to be torn. On the one hand, it’s Les Mis. Anyone who doesn’t love the score of Les Mis has no soul. Secondly it’s an awesome performance (except… I think Margot may not be there… either that or Eliot and Fenn are just leaving her in the shade). How can you not love every second of this? Of course I love every second of this. It’s awesome. Rewind it and watch it again, it’s awesome.

On the other hand? This show, with all its gross gay stereotyping, just sent the High King into battle singing a musical. And I really want to just love it, I want to ignore that, I want to just revel in the music but… I can’t really get pasty that issue.

Aside - can we talk about what the Lorian's are wearing because wardrobe - what are you aiming for with the king here?! 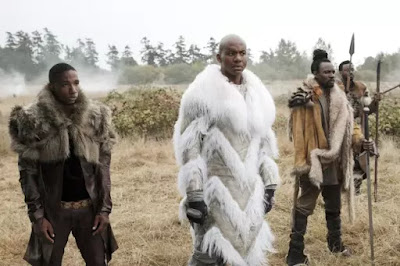 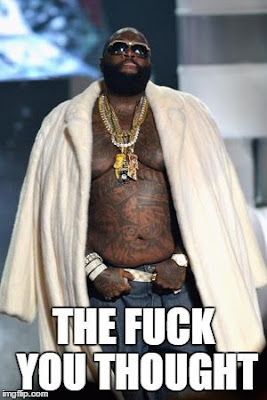 So time for a duel between Elliot and Idri and they quickly end up relocating to the forest (because, apparently, running away isn’t actually banned). They fight back and forth until the magic goes down and Elliot hides in a tree which King Idri then begins trying to cut down with a sword. This may take some time.

This does give them some time to talk. King Idri thinks his people are so used to hardship they won’t even notice the missing wellspring while Elliot thinks Fillory seems to be almost trying to destroy itself. They both commiserate over how annoying being king is. Elliot also talks about the utter sexual frustration of being married.

Ok, side point here – a lot of people have responded to my previous comments about Elliot being a horrendous gay stereotype with “he’s bi/pan”. Nah, he’s been forced into a relationship with a woman and every step of the way he’s made it clear he is not enjoying it. At best he views sex with women as a curiosity – but it has always been clear that this is not what he chooses. When choosing sex partners, he chooses men. He considers marriage to a woman to be dooming himself to “sexual frustration” and regards sex with women with only marginally less enthusiasm than I do. Eliot is gay.

It also turns out King Idri is also attracted to men but has avoided other men out of love for his wife. They comment on how hot they find each other

Intermission – Margo is looking for a way to cleanse the wellspring because if the magic goes down mid duel (as it does) and she learns from her most trusted counsellor (the sloth. Of course it’s the sloth) about the fairies. Who are super powerful and can cleanse it if they make a deal. Which may be a bad idea as they are mercurial (and while I get “have you met your king” as ACCURATE, I also wish to point out a show that has this much of a terrible homophobic record really really needs to be careful about calling gay men fairies)

Margo, like everyone on this show, has never met a bad idea she didn’t want to leap for - so it’s time to meet with the fairies. Alas with no preparation so she promptly insults him resulting in the ambassador refusing to deal and force her to either accept or decline his single offer

He wants Fenn and Elliot’s child.

Ouch…. But seeing Elliot possibly about to die and with it all of them and Fillory, Margo goes to Fenn and brutally manipulates her into agreeing to do whatever she wants if they get magic back and Elliot survives. Poor Fenn, of course, agrees.

The ambassador praises her skill. And she responds “I’m a manipulative c*nt”

Whoa, no. no no no no. I get you want to hammer home how terrible what Margo just did was and how Margo utterly loathes herself for it. I get it – but you don’t need to use that word. You can use other words, other sentiments to make it clear how much Margo brutally loathes herself without resorting to this misogynist slur. You don’t need that shock value.

The deal sealed, Eliot gets magic back mid-duel

But when he returns to the palace of Fillory, it’s not with king Idri’s dead body. It’s with them both alive – and engaged

Hey, loophole, all kings of Fillory get to have 2 spouses, one female, one male, and no-one felt the need to mention this to Elliot? Really? Also can we jump back 2 episodes to when it was (rightly) grossly unacceptable to marry Margo off to an enemy for political expedience? But it’s ok to do that to Elliot twice? But hey this one’s a hot guy so Elliot’s totally going to be fine with it? Ess being hot wasn’t considered sufficient to overcome Margo’s objection!

Also I’m kind of irritated by how quickly Fenn gets on board. Yes she’s all for king and country but my gods she needs to be more consistently portrayed with strength and will. Let us see her accept this because of a passionate desire for her country and land and peace – not this implied willingness to do anything for a husband who, let’s face it, barely tolerates her

Still at least Elliot is not being forced to straighten up so there’s a definitely good side here. If it’s maintained and done well. Magicians you’ve got some ground to catch up on!

Of course, Margo made that eal….

Outside of Fillory and way from the musical, the gang has Quinn locked up, confirm that he’s dying if he doesn’t elease Alice. He refuses even while Alice begs and promises she has absolutely no wish to kill people – pointing to Joseph as proof of this.

But they have other issues – Penny and Kady rescue Julia because they’ve found Renard’s son – he’s a senator. A genuinely good man who believes everything he says, has massive charisma and pretty much succeeds in everything he does, oozing power all the way.

They go to him, try to intimidate him with magic – and Julia tries to kill him. Shade-less Julia needs his power, not him and is quite happy to harness that by just killing him. Penny and Kady object – and in the scuffle Senator John reveals his power, knocks them all over – and himself out.

They kidnap him and bring him to Brakebill. I rather think that Henry is just getting inured to all of their antics by now. You’ve just kidnapped a senator? Ok whatever. It gives Kady chance to talk to him about is uber charmed life and how his power has granted him everything he’s always wanted.

Which is when Renard arrives and starts playing in John’s head. Everyone has confidence in Brakebill’s wards – until the magic goes down. Cursed wellspring. They retreat hurriedly to the uber warded lab

Except Julia and Quentin. She has spotted another quick plan to bring down Renard – throw Quentin and the niffin Alice at him; we’ve already proven niffin are dangerous to just about everything. Except for Renard’s freezing spell.

Quentin is seconds away from being ripped apart by Renard… until John arrives. Luckily for Quentin, Renard seems to want to convince John he’s a good guy and instead vanishes with his son.

Leaving the gang to fully accept what Julia just tried to do – especially Kady. He’s been making excuses for Julia throughout this episode but she finally realises just what a monster Julia has become, incapable

And Quentin, unable to hold Alice any further, releases her – and hope she’s right that she doesn’t want mayhem. First evidence seems to support him: she leaves without trying to kill him.

And now I’m going to replay the music.