Apprentice (Into the After #1) by Patricia Thomas 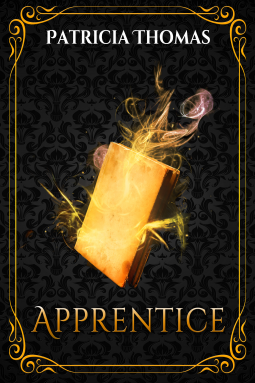 This book didn’t have much in the way of plot. Tari goes to university as an apprentice. She studies, she learns, she takes exams. Apart from a bit at the end, this is basically the story

Or another student to be a vicious competitor and she and her friends would have to get together in a desperate struggle about them,

It wasn’t. It was Tari going to school. And that’s ok.

There were no love triangles, no desperate struggle, no quest to save the world/find the deep dark secret. There wasn’t even a mean teacher who was trying to make Tari fail for some reason that should have got them fired from any decent educational facility

And that was ok

Tari has a secret but it’s only really a big thing towards the end.

No, really. I know I know, with any other book I would have screamed at it to get on with some actual plot. I would be frustrated by the lack of action, by a book where nothing seemed to be actually happening

But I wasn’t. I loved this book – really, the lack of major epic plot was ok. More than ok. It was so excellent to see a character just exist. No world defying consequences, no massive issues, no convoluted drama o love triangles or convoluted dragging out of the plot with lots of misunderstanding and caricature villains

This was Tari going to the archive to learn. That’s it

And it works because this world is awesome. This book is one bug info dump – and yes THAT’S OK. It shouldn’t have been. By every rule out there this book should have annoyed the hell out of me. But I read it all in one afternoon, not stopping for a second (I was supposed to cook dinner. We had take away. Which I ate one handed because I didn’t want to stop reading.) It was one long info dump of a FASCINATING WORLD

I’m not going to go into too much detail about this world because that is this book because this book is absolutely awesome and the world building needs to be experienced. The book takes place in the After (contrasting with The Before – or Earth). The After is a world created from Earth’s fiction – every time a book is created, read and loved on Earth it enters the vast Archive. And the characters in that book add to the After’s population. Each new book can add new streets, new lands – even new cities and countries and mountain ranges to The After. And the After is vastly diverse –whether a city is sci-fi

And it’s the job of the Archive to regulate this. To lead the After, to preserve and study the books, to predict what changes are going to happen, how each book will affect the world and to see what adaptions they can make based on the books they have – what technology they can discover, what they can develop (just because the books contain the technology doesn’t mean it comes with the technicians to create it) and managing the different regions of the world – each with their own technology levels, their own magic systems and everything else from our rich world of fiction

I won’t go into more detail than that because it really is fascinating and deep and layered and all excellently developed through Tari’s experiences. It’s really excellent

We also have the ingredients for lots of future stories – like fictional characters (like Tari) not being considered full people like their children are. Characters directly from a book don’t have a full life (like Tari wasn’t written with parents or a childhood) because they’re not written with full histories or experiences. These lack of experiences mean they’re considered to not be fully balanced or enriched people – though it could be down to prejudice as much as anything

There’s also a level of prejudice against “Prosaics”. With fictional worlds containing so many people with magic, supernatural abilities et al (and the world building of all of this is so absolutely awesome and I can’t recommend it enough) people who don’t have any are called Prosaics and considered much less capable.

This world stands out but I also have to talk about the relationships with Tari – because they’re awesomely mundane. She has a romance with a decent guy and they get on well and it works They have some good teachers who want their pupils to learn and are dedicated and capable. She has some great friends, some of which are flawed but still very good. Misunderstandings are brief and dealt with reasonably and sensibly. There are people she doesn’t like who are… slightly annoying people she didn’t like

I know it sounds dull but it’s so REAL. So human and reasonable and none of the mind numbing melodrama – these characters are real and their relationships meaning and despite being in this really fantastic world, Tari leads, well, a quite mundane life.

Tari is a Black woman. Her room mate is either bisexual or a lesbian and in a relationship which has ups and downs but is generally good; they are not the most prominent but are definitely constant and present. Her love interest – and top of the class – is also a Black man. We have a number of ethnicities present among the side characters, the librarians, the teachers and students.

This book was short – but I think it needs to be. I think the lack of detailed plot would have become much more frustrating if the book were longer. This glorious, wonderful, detailed world would have fallen apart if the book didn’t move at this great pace covering such a large amount of Tori’s life. Similarly I think the second book in this series is going to have to throw in a lot of plot now this awesome world has been introduced

But, despite breaking all the rules, I loved this book – and I can’t wait how this amazing world expands even further and how characters can explore this excellent originality