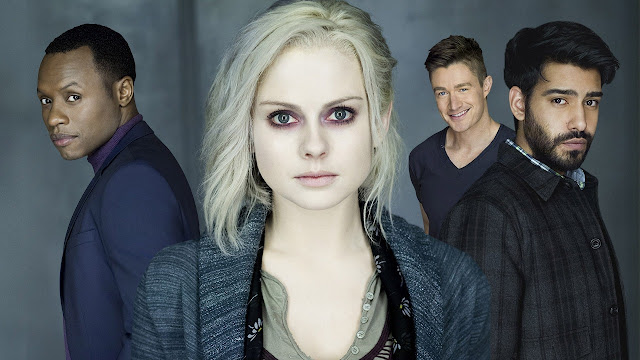 iZombie is back – and we’re opening with a recap because my gods do we need it given the last season!

So, a reminder: Max Rager has been destroyed, their zombie captives have been released and taken by Vivian Stoll from Fillmoregraves (ok that’s still either terrible or awesome or both. I laugh, then feel terrible for laughing. I’m a bad person) to her home. Vivian and her happy band of zombie mercenaries want to set up a new homeland

Meanwhile Peyton was just rescued from crime boss Stacey Boss’s goons by Blaine (who was kind of responsible for the kidnapping in the first place) while Ravi waited outside and Ravi is all sad about this.

So the gang gets together and Liv pushes that the five of them are united and should not keep any more secrets from each other – which involves Liv clearly telling Clive that she and Major are zombies and her also telling the group that Vivian is talking about a new zombie homeland.

Clive would kind of like not to be in the loop on this one because, really, it’s a lot to absorb. He also hears about an army of super powered zombies (since they have Max Rager) mercenaries who want to establish a new country and he is…  duly wary of that.

While Major kind if sees the point – he doesn’t think that zombies are going to be welcomed with open arms by humanity. Let’s face it, brain eating is a tough sell.

There’s also a lot of talk around whether Peyton and Blaine are a thing which is a huge distraction at the moment. Major is also looking for Natalie – one of the zombies he had a thing with before drugging her and freezing her.

So to FillmoreGraves and Vivian makes some compelling points about how, when zombies are revealed, humanity will murder them. They eat human brains and they’re highly contagious via the slightest scratch. This is not something humanity is going to accept with warm fuzzies. The “zombie homeland” means an island, which they own, which will become their new stronghold which sounds a lot less ominous than images of invading and conquering Seattle.

She also tells the story about why she has a zombie army. She was infected by her husband who is now probably dead (all likely due to Blaine). While on a mission a large number of her soldiers were infected by a nasty weaponised agent and that infected a whole lot more people – including children – at the company gathering. Faced with everyone about to die horribly she offered the only cure she had: zombie scratches.

Again, Major sees the point while Liv sort of sees her point but does think you can reach some people with reason and compassion (while this does seem a little fluffy-bunny-ness we have to remember she has Peyton, Major, Ravi and Clive. She has several people around her who may not have initially reacted well to her zombiehood, but eventually came round).

And Clive is more moved when he sees one of the zombie children – Wally, a child of a neighbour of his who was clearly quite close to. It’s good to see how much any struggle becomes much more humanised when you see the actual people affected: it’s also notable to be much easier to see a zombie homeland which includes kids rather than lots of lethal soldiers.

Also everyone tells Liv she needs to Tan & Due because she’s really not hiding her zombieness much.

Clive does check with Ravi about cures for zombiedom but learns that a) there’s only 13 cures left (which is awkward when there are literally hundreds of zombies now. Who chooses who gets the cures, especially with children being among the zombies) and b) it causes massive massive amnesia, an unfortunate side effect. Ravi also reminds us that Major is still dying from the first version of the cure.

What Ravi is currently trying is find a cure to amnesia. But that doesn’t really solve the whole 13 cures only. This nicely establishes that Clive doesn’t have an option C to support. There’s an extra human element with Liv’s soldier brain wearing off and her grief over having to kill Drake, her boyfriend, rises up: again, reminding Clive of the humanity of zombies.

As they’re talking they hear about a conspiracy theorist programme has managed to find a witness of the Max Rager massacre – and they rush to try and silence him. Which is really really silly. They’ve both discussed how absolutely ridiculous this conspiracy theory is, but them trying to silence the man talking about people eating brains gives it an aura of legitimacy

So the story is out – but not widely accepted given the source. It’s still worrisome as the conspiracy theorists discuss military plots – and zombies

And may be the motive behind a murder – a family all killed by someone shooting them in the head. It’s Wally and his family.

Whatever doubt Clive has fades completely in the face of people killing a child and his family for no other reason than being a zombie. He sees the need to help protect the zombies

Ok, this is an interesting storyline in that it dances on the edge of drawing on comparisons with marginalised people, hate crimes, et al and never once really goes so far to directly appropriate from actual marginalised people facing these problems. It’s a distinction but it’s one I value a lot. Similarly no-one is turning round and calling Clive a bigot or prejudiced for his reasonable doubt here – again, I appreciate that in avoiding a lot of the very problematic tropes of marginalised appropriation. Even when discussing fear of zombies they make it clear that it’s a hard sell: brain eating and infection. There’s no suggestion that fear and even hate of them is completely irrational. They did sell he need to protect the zombies to Clive and it was a repeated hard sell, recognising that it is extremely reasonable for him to have reservations and not condemning him for that

These kind of plot lines are always a very very difficult and edgy path to take: but I think so far iZombie has managed to do a good job.

Major is also having issues – his house and random passers by still see him as the Chaos Killer. He’s been cleared by the police but that hasn’t cleared him in the court of public opinion, he’s also finding it very hard to find a job. He ends up joining up with Vivian’s soldiers

Ravi is having romance issues and it’s fairly well done. Because Ravi is all moping over the fact that he wasn’t the one to rescue Peyton and that Peyton may or may not have had a thing with Blaine and may be tempted to again.

The other is Peyton. While Ravi is concerned about relationship, she is more horrified by her recent experience of being kidnapped and her life threatened by Stacey Boss. Yes he’s out of the picture and has left the country but she’s still afraid – and Blaine offers to be someone she can confide in or be distracted by. Yes he asks about whether they were in a relationship or not but he doesn’t make a big thing of that so much as her comfort

She also starts receiving a lot of vicious twitter abuse – when she calls Ravi for someone to confide in for support he doesn’t pick up the phone: because he’s moping over the romance. And she turns to Blaine

Depending on how this plays out, I’m invested. If it turns out that the lesson is “Ravi, pay attention to Peyton, the person, the traumatised woman who needs you support and kindness rather than the love interest” then I’m here for that. If the lesson is “Blaine is being a nice guy, he gets the woman” then I’m going to thrown a lot.

Blaine himself is increasingly realising he wasn’t a nice guy at this point. He’s also abandoned by Donny who has deciding that Blaine is faking his amnesia. He leaves – and takes Blaine’s frozen evil father with him for more plotting.

We also have Ravi’s old boss who sacked him (for “thinking outside the box”) Her name is a rather ridiculous Katty Kups. And she has a zombie body to analyse.

I’m definitely invested but I already have an issue here – I think we may have one storyline too many. Specifically the Donny storyline, do we need this? Or Katty Kups? We may be overfilling this. But so far the balance is really good and it has been excellently well done. I'm also really looking forward to having Clive in on the big secret