Flashback: The Morrigan (Yancy Lazrus #3.5 ) by James A Hunter 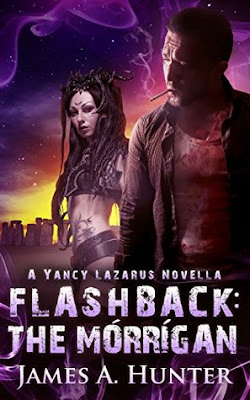 This book finds me in an awkward position of trying to write a review which is functionally different from my review of Siren’s Song. Because I’m in much the same position

I like the story. I think it’s well written, I think it has a lot of action, a lot of excellent epic fight scenes and the whole awesome description of Vis and the Tuatha de Danaan. It was epic, it was action packed, it has some nice twists.

And then Ailia, the woman he loves, was abandoned by the Guild of the Staff after they faced the Morrigan and Yancy decided to turn his back on all of them. This in turn laid down the path which led to the main books

There was no way we couldn’t not know this story

There is no way we couldn’t know how this book ends.

We even know most of the details of this, who is involved and why.

So despite all the action and the power and the roaring fighting, I have almost the same level of frustration I have with Sirens - I know this story.

What raises this above is that we’re introduced to a lot of characters and world building that may be relevant in the future- the Tuatha de Danaan, the major characters among them, their plotting, their scheming and who is involved. The introduction of several of these godliness and how very likely these characters are going to become relevant again. These heavy players are definitely going to come up again in the series.

It was also nice to see, however brief, an introduction to Ailia. After all this entire series has been underpinned by the Manpain of Ailia’s loss which set Yancy on his path. It was nice to finally see the woman, her strengths, her power, her skill, her relationship with Yancy. It was nice to have a person there rather than just a concept or a name. That is a definite positive.

I do find Yancy especially irritating in this book, though. I have long said how characters who are angry and abrasive for the sheer sake of it gets on my last nerve.  Find few things more infantile than a character who can’t be allowed unattended in polite company in case they piss on the curtains and curse out the queen. This isn’t rebellion, it’s a tantrum. And Yancy being unable to keep a civil tongue in his head while on a diplomatic mission is aggravating. This isn’t a cool character or a strong character. It’s a damn fool character.