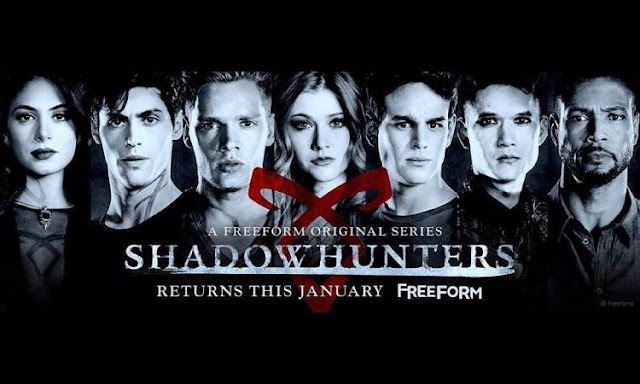 Please, watching Harry Shum lower himself and Isaiah Mustafa deliver his lines with a “my agent will pay for this” look in his eyes is depressing.

So, Valentine has Jace on the worst cruise ever and alternates between torturing him and then playing loving daddy. Because this works. Actually that’s not entirely sarcastic, this seems to be actually working. Jace is looking sympathetically towards evil daddy dearest. Really. Even with the torture. He also tries to tell Jace that he’s the good one and his mum is totally evil (and, like every stupid protagonist faced by this stupid situation, he is actually willing to listen to this rather than assume the bad guy is actually lying to him. Really).

Yes I’m going to be saying “really” a lot here. The collective IQ of this show is slightly lower than a Trump rally.

Also Valentine thinks all downworlders are super evil because they have demon blood that they simply cannot control. Also he experimented on Jace by injecting that evil demon blood into him while he was a foetus to make him more powerful.

Back to the main gang – on considering that Valentine has the Mortal Cup, is threatening to unleash an utter war in their society and generally unleash all kinds of badness, everyone is super worried… about Jace. Fuck the rest, war et al – Jace needs saving

Also the Clave are just the biggest mean meanies evah for not shelving this whole stop-the-war-and-save-the-world and focusing on precious Jace. They have a new leader, Victor. We’re supposed to see him as evil rather than the guy who actually has his priorities in order

The Clave generally thinks that Jace is less of a priority here and may even be a traitor, since he ran off with Valentine and, by Clary’s own damn words, she had multiple attempts to kill Valentine and he didn’t. His loyalty – from what we’ve seen alone – is definitely suspect. Of course the Clave is the Worst EVAH for seeing Jace as an enemy and is even moar evil by restraining Clary and the gang when they declare “waaaah, we know better and are going to defy you and tell you this to your face, so there!!!!!” I would say they’re under arrest but, given their general demeanour, I think “grounded” is more appropriate.

The Clave also decides to kick out all downworlds to remind us that while the main gang are the worst, so are the Clave as well. There’s a lot of worst to go round.

Clary and Jocelyn have their reunion and it’s just AWFUL. I mean really awful. It barely lasts 5 seconds of Clary telling her mother that Jace is alive before the director desperately throws Luke into the scene to try and distract from the performance. This isn’t enough so Simon is thrown in to babble.

Sadly Clary manages to escape the Clave (after having a training montage with Izzy because it’s a way of getting her on screen without her acting) and her mother, very wisely, locks her up in the warehouse the werewolves dumped Simon (not being a big fan of vampires) so we can be subjected to Simon babbling away around his terrible taste and how he totally loves Clary but can never tell her.

Jocelyn goes out hunting for Valentine With a weapon. As she should.

Let’s check in with Alec and Magnus. He snarls repeatedly at Magnus and generally treats him like utter shit – more, he has decided that Magnus owes him in some bizarre way, because Alec didn’t enter a loveless marriage with a woman. He wants Magnus to step up and use his magic to solve Alec’s Jace issue (Hey, Valentine wants to commit genocide against Magnus’s people? The people he’s supposed to leave? Fuck that, Alec needs to you step up and serve Jace. Hey this is very similar to the books)

Unlike the books, Magnus actually objects to being snarled at, treated like shit and expected to perform like a magical servant and he leaves. So Alec catches up with him to say that he’s kinda sorry ok, now can we get to the magical serving already because Jace is so much more important. And lo Magnus agrees, accepts the Nonpology and begins to serve. So exactly like the books. Yay inclusion.

Oh, by the way did I mention that this boat the Clave can’t find is fecking huge and within visual distance of New York City but they can’t find it? They even know he’s on a boat! Do they not have a telescope? Hey most harbours have those binocular things for tourists. Couldn’t you get some Shadowhunters to use them?

Valentine decides that he needs to take Jace on a little lesson on why the Clave is terrible – he takes him to a load of vampires who are slaughtering humans. Jace kills a lot but their leader surrenders and, under the accords, she now can’t be killed and has to be subject to Clave authority and courts and things since she’s no longer a threat, isn’t fighting etc

Ok? Is this a bad thing? Sorry, is this supposed to be a conflict? “you can kill downworlders breaking the law when they’re a threat but should put them on trial rather kill them if they’re not.” Should not be controversial. Is this supposed to be showing a flaw in the Clave to the viewer? Because it isn’t. Is it to show how evil Valentine is? I think we already get it. Is it supposed to show that Jace is being tempted – because if that’s true it can only be because Jace is a violent arsehole with vigilante and authoritarian tendencies. Jace looks all conflicted, of course he does, but it’s easily resolved because the vampire decides to attack Jace anyway.

This is when Clary and Jocelyn catch up. Jocelyn shoots Valentine with a crossbow bolt – to which Clary screams “NOOOOO STOP!!!” to JOCELYN while Jace hurriedly saved Valentine by helping the wounded man through  portal.

And we’re supposed to say Jace isn’t a traitor?