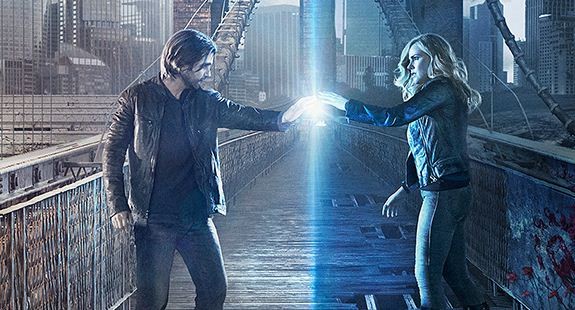 Cole looks out at the ruins of a city.

Because there's so much going on with the plot and so much time shifting, Jones has to give us a recap about what has happened up until now. It's really necessary because of how in-depth this conspiracy has become over the seasons but it's still not making a lot of sense if you ask me.  We know now that The Witness is actually Cassie and Cole's son and several characters are lost in time.  Cole is now looking for them in 2163, by chasing the temporal signature of the enemies machine. Cole at this point is desperate to save Cassie at all cost and his hope is fading. Jones questions how they can defeat an enemy from their own future because time is no longer on their side.

After planting yet another beacon, Cole returns from his trip to be confronted by Jones, who believes it's time to stop searching.  Jones believes that Cole's loyalty is distracting him from the truth, which is that Cassie isn't the mission. Cole brings up Ramsey and Jennifer and so Jones is forced to point out that they need to stop the plague and potentially save everyone. When Cole refuses to listen, Jones actually threatens to put Cole down.  Cole is holding out hope because of a spike in the temporal energy at a place he stopped at. Jones finally consents to another mission but decides that this time, Cole won't be going alone.

Hannah is engaged in a battle straight out of the thunderdome when she's approached by Jones.  Hannah doesn't want to go anywhere because she is concerned about the security of the facility and feels that she has a responsibility to her sisters.  Jones however argues that they might lose Cole and therefore, someone must keep an eye on him. Hannah is insistent that she went to Titan for Goines and that this is not her mission. Jones finally convinces Hannah to go by saying that the greatest danger to Cole is himself.

Hannah trails behind Cole as they search for Cassie. Hannah makes it clear that she doesn't trust what he's become - a man unwilling to face the hard choices. Cole finds the beacon in question, only to find that it's run out of battery. Hannah of course wants to splinter back but Cole is not having any part of that. Before they can come to blows, the machine powers up again and starts flashing red. Hannah steps into Cole's path, and points out that they almost died the last time they were in Titan. Hannah suggests they head back to the facility. Cole however is worried that if they don't go now, they will lose the signal forever. Hannah attempts to inject Cole with the syringe her mother gave her and when that fails, a fight breaks out between the two.  Hannah is savage as fuck and it seems as though she gains easily gains the upper.  What Hannah doesn't realise until too late, is that Cole has injected her instead. Cole keeps moving until he comes to the outskirts of Titan.

A heavily pregnant Cassie is now dressed in red and she's clearly despondent. Arianna lays out a feast of food in front of Cassie, encouraging her to eat to nourish the child growing in her belly. Magdalena enters the room to tell Cassie that she has a chance to show her love for the Witness. It seems that Magdalena feels that Cassie should display love for the man he will become because the Witness chose Cassie as his vessel. It turns out that Magdalena was raised to raise the Witness and it's she who the Witness will see as his mother figure. Cassie apparently is just a womb. It's as creepy as it sounds. Magdalena holds a knife to Cassie's throat and warns her to mind herself.

Hannah has returned, thanks to Cole injecting her.  Hannah quickly announces that they found Titan and that need to bring James back before he can approach. Unfortunately, because James's tether was used to bring Hannah back, the machine thinks that James is already in 2046. Before they can bring James back, the system has to be rebooted.

Arianna is taking care of Cassie and Arianna explains that she believes in the Witness because it's all she's ever known. It seems that Arianna was kidnapped from her parents in the past and brought here to serve The Witness. Cassie and Ariana bond over the fact that they both miss their family's.  Arianna asks about The Witness's father, and a tearful Cassie admits to missing James, who doesn't even know that she's pregnant.

James is forced to stop when he finds himself confronted by a masked person. The two of them fight and it's a well balanced battle. Cole is confused that his adversary keeps flashing in and out.

It's reported to The Pallid man that another time traveler has arrived and so he decides that Cassie's unveiling will just have to wait. A gong goes off which indicates that Titan will be leaving this time and so Arianna escorts Cassie back to her room. Cassie pulls out the clip that was placed in her hair and kills two of the female guards watching her.  Cassie begs Arianna to come with her so that together they can save the Witness from the monkeys.  Outside, Cole moves as quickly as he can to get to the city. Magdelena comes across the two women that Cassie attacked and learns which direction Cassie is travelling in.  Unfortunately, Cassie and Arianna don't get far and find themselves surrounded.

They've finally managed to pick up Cole's signal but are astounded by the amount of radiation. It's enough for them to realise that Cole must finally be in Titan.

Cole rushes in and to see that Cassie is surrounded. Cole is clearly outnumbered but he rushes into battle anyway, only to have the adversary he fought earlier show up and shift him away.  Titan moves once again.

The adversary takes off his hood and reveals that he is future Cole.

Titan has moved again and Arianna sacrifices herself so that Cassie can attempt an escape.

Present Cole doesn't understand how he is talking to his future self and not creating a paradox. Future Cole doesn't have much patience for his old self. Future Cole says that present Cole is a rabid dog and blind and suggests that his target should be Jennifer Goines, who he calls, "chock full of nuts". Jennifer however is lost in time and she has all the answers.

Yep, Jennifer has landed right in the middle of a trench in WWI.  The Germans are systematically shooting people and Jennifer's response is to sing 99 Luftballons and this comes complete with the most missed up music video like montage.
Naturally, the Germans have no idea of what to make of Jennifer and so instead of killing her, they start laughing. Jennifer gets a vision of the horseman and says that she needs to get a message to her friends because it all starts here in the past. As Jennifer rants on about the horseman of the apocalypse, the Germans are even more convinced that she's mentally ill and well, they're not exactly wrong.

Cassie is still trying to escape and she comes across the Pallid Man making a speech to the followers.  The Pallid Man assures everyone that The Witness is safe.

Cassie walks out onto a ledge and Magdalena actually taunts Cassie, cause that's the smartest move when someone is clearly considering suicide. Cassie realises that if she dies that this all ends now. Magdalena says that they don't make the Witness, he makes them because the Witness is already who he wants to be. Yeah this is more Timey Wimey shit to cover for the fact that this is making no sense.

Announcing that the Monkeys cannot have the Witness, Cassie leaps off the ledge. It turns out that Magdalena is wearing the same kind of outfit that Future Cole is and when she activates it, instead of crashing to her death, Cassie finds herself relieving having Arianna trying to encourage her to eat, just before Magdalena barges through the door. This time, Magdalena stabs Arianna right away as Cassie screams.  It seems that Cole isn't the only one travelling back in time to talk to her past self, though this results in future Magdalena having to immolate herself.  Cassie is informed by Adler that her son will always know that she chose death over him, and so therefore; the remainder of Cassie's days there will no longer be comfortable. Once again, Magdalena warns Cassie to mind herself.

They've finally picked up Cole's signal.  Jones is shocked to find out that Cole is in the Emerson hotel but she hurries to bring him back.

Old Cole is frustrated by future Cole's suggestion that he just give up on Cassie because that's what's supposed to happen. Cole points out that no matter what they do it never gets better.  Future Cole explains that he didn't come to save Cassie and that Past Cole is going to hurt and break. Future Cole warns Past Cole that he's going to have to forgive himself for what he's done and for what he's going to have to do.  Apparently,  there's a beginning and an end, and all Cole well ever have is what is between.  Future Cole however does suggest that Old Cole will always find his way back to Cassie before handing over a newspaper clipping.  Old Cole is splintered away and Cassie makes an appearance.  Cassie suggests that there's another way but future Cole is insistent that there's not

Cole arrives and is immediately punched by Hannah.  Cole explains that they are done searching for Titan. Cole hands over a newspaper clipping of Jennifer in 1917, and declares that Cassandra is not the mission.

It's now four months later and Cassandra is giving birth surrounded by the Monkeys. Magdalena demands that Cassie push and over Magdalena's shoulder, a specter appears.  The cameras pans back on Titan and a baby can be heard crying.

If you had trouble keeping up with the time shifts this episode I don't blame you. Unfortunately, they've made the whole time travelling thing even more complicated now that everyone can just tool around with a splinter machine on their back. This means that anytime a mistake happens, someone can simply travel back in time, talk to their past self and rectify it before it even happens. In this case, Cassie is forced to live and Arianna still ends up dead.

If everything is pretty written what the hell sense does all this time travelling really make? This means that Cole and Cassie's son is going to grow up to be the Witness and end the world.  It means that they will never know peace or happiness.  What does it matter if Goines knows the answers when nothing changes?

Speaking of Goines, she's easily the best part of this episode. Only Jennifer could respond by finding herself in the middle of trench warfare by singing 99 Luftballons; it's absurd but so fitting.  I'm still very conflicted by the was that 12 Monkeys portrays mental illness. On one hand, I love that a disabled character is central to the show, on the other her mental illness is often played for laughs or to fill in a plot hole.  There are times when Jennifer is more caricature than character which is why it's important to stop and think about what are we really laughing at when she does one of her weird scenes.