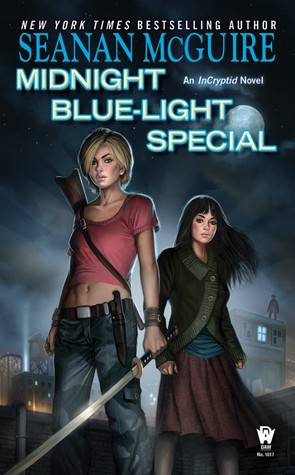 The Price family, Verity’s family, broke from the Covenenant of St George several generations ago – preferring to study and understand the cruptids out there rather than call them all monsters and unleash genocide on them.

The Covenant was not supportive of this split. And now they’ve arrived to perform a purge of New York City, Verity has a major problem trying to keep the local Cryptids safe – and to keep herself below the radar. Because if there’s one thing the Covenant want more than destroying “monsters” it’s destroying the Price “traitors”

I have said it before and I will say it again, if you don’t love the Aislinn mice then you simply have no soul. And if I have one complaint about this book is that there needs to be so many more Aislinn Mice. More Aislinn mice. Moooore.

There’s also more Istas, the Waheela, who thinks everything can be solved with more carnage. I approve of her carnage approval.

There’s also some excellent development of Sarah, her powers, her nature, and her own awesome emotion and characterisation as her natural powers fail or don’t apply. That’s one thing that is so excellent about the world building of these books – everything is thought through, implications are considered – there’s depth as well as breadth. Like Sarah being unable to recognise people by facial features because she’s a telepathy – and recognises people by their thoughts.

This whole book is excellently balanced with the awesome world building (and I could go into it again – but really it’s a repeat of the same awesomeness I mentioned in the first book – just read that because it’s awesomely well done), the excellent action scenes, some really awesome characters who work so well together with some truly perfect familial bonds on display and all lightened with an excellent amount of humour to keep things light and action packed and deep and awesome.

Verity continues to be awesome as well, with her own conflicts about what she actually wants to do, the idea that she doesn’t have a choice any more – but how that resentment could grow to make her loathe her life. There’s a lot put into this that I really like – her own dreams facing the harsh reality of her family legacy.

As another bonus there’s less De Luca. Or it feels that way – since they spend far more time worrying about what he’s going to do and which side he’s on rather than actually dealing with his blandly bland self. Maybe I’m being unfair – I mean the whole debate over him is actually really well done. There’s a great acknowledgement that while Dominic no longer agrees with his extreme brethren – there’s still a huge step from that and turning his back on everything he believes him. The reaction of Dominic and Verity are both good – because Verity is hurt but reasonable, grudgingly; nor does she allow affection or their relationship to cloud her simple judgement. At the same time Dominic is excellently conflicted because loyalty vs new revelations is a hard thing to get through

I still don’t like him though… I find him bland next to the awesomeness that is the other characters, especially Verity

In terms of diversity, Verity is an awesome female character with strength and conflicts who has a female best friend in Sarah with her own strengths and throwing in Istas who is equally fun. There’s never a suggestion of the women hating or disapproving of each other

Istas, our carnage loving Waheela is an Inuit woman. We have 2 recurring Indian-descended characters who are friends of Verity and we have minor background POC as well. Rochak and Salim are more prominent in this book, as is Istas, but I’m not sure I’d consider any of them major characters though they are definitely not insignificant

This series has all the hallmarks of becoming one of my favourites. For the Aisling mice if nothing else! Hail the series! Hail the characters! Hail the world building! Hail the relationships! Hail the mice! Hail!