Sense8, Season Two, Episode Ten: If All the World's a Stage, Identity Is Nothing But a Costume 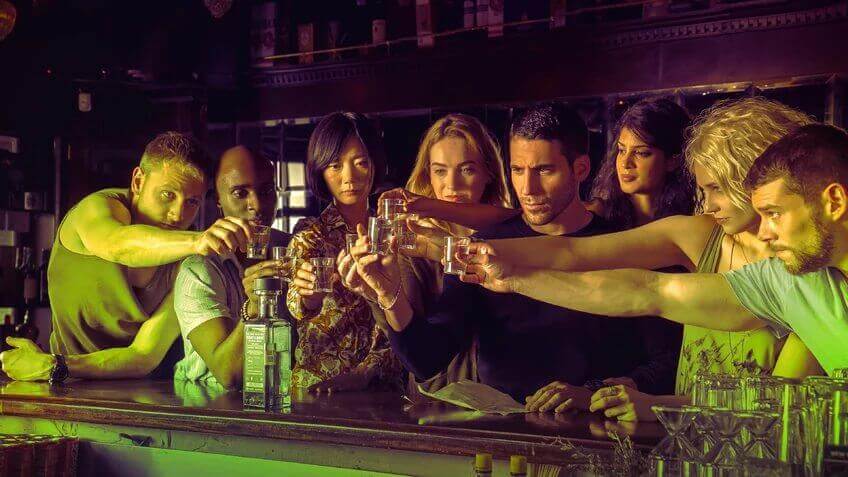 The pieces are finally coming together for most of the Sensates. Having made the decision to run for office, Capheus must deal with his nerves and give a speech. Lito has an audition for the role of a life time. Sun is getting closer to finally getting revenge on her brother.  Kala and Wolife are coming to a point of no return in their relationship as they confront their feelings for each other and of course Nomi, is now E Dead thanks to Bug.

Being late on the loop, our beloved little cluster is still working on getting blockers to protect themselves. Thankfully, Kala's science knowledge comes in handy here. Kala joins Riley on the flight home and talk quickly talks turns to what it's like for Riley and Will to be together. Naturally, Riley assures Kala that it's pretty damn awesome.  Having her suspicions confirmed, Kala's next visit is to Wolfie. Clearly, the Wachowskis are determined engage every single romantic fantasy you've ever had by having this happen on a balcony at sunset. Even though Kala is undeniably attracted to Wolfie, she's largely kept up her guard. Now, Kala risks it all and admits that if she lost Wolfie, her life would have no meaning.

Now that Wolfie and Kala have admitted that they have to be together, they now have to figure out how, when, and where.  Kala doesn't want Wolfie in India and is determined that they can only be together after she tells Rajan.  Germany isn't in the cards with the escalating violence either. So, London it is.

It's now time for Lito's big audition with Kit Wagner, a powerful gay screenwriter/producer.  And who did the Wachowskis cast? Why, Andy Dick of course. I understand this choice but I don't like it all.  Ltio is absolutely nervous because of how much is riding on this but of course, this is when Sun shows up. in need of Lito's help. Earlier, Lito had promised to help Sun fake her way through being a bartender and if she doesn't make a sidecar, her fake identity will be revealed. This is a tough position for Lito to be in but he asks for a break and helps Sun out. It's straight up flair bartending and it's awesome. Now that he's done helping Sun, it's time for Lito to get serious about his audition and he's blowing it. Nothing in Lito's career to this point has prepared him for a role like this. Fortunately, Lito has Sun in his corner.  Sun channels her feelings of isolation as a child to bolster Lito's performance and it's beautiful and heartbreaking all at the same time.

Now that Lito has gotten the role of his dreams, it's time to attend his first big Hollywood party with Hernando and Daniela The Fetishist by his side. One look at Lito causes Mark and Kit to decide that he's not dressed appropriately. This means that Lito must undress down to his underwear (thank you for that Sense8) and put on random pieces of clothing from the other party goers.  I think it's a sign of just how much confidence Lito lacks in this moment because he allows himself to be treated like a dress up doll. Now that Lito's dressed like his character in Iberian Dreams, it's time for him to meet his love interest Blake Huntington. I have to say that Blake is smooth and he even manages to catch Hernando's interest with his breakdown of Lito's previous roles. I see what you're doing there Sense8 and you better not have Blake come between Hernando and Lito.

Having made the decision to run for office, Capheus is dressed in what is clearly a dated suit, to make a speech to the public. Lito shows up to help boost Capheus's confidence. Of all the Sensates, Capheus and Lito have probably spent the least amount of time together over the episodes.  This is a good time for them to touch base Capheus and Lito  are both essentially going through the same emotions, oceans away from each other.  Like Lito, Cpaheus very much feels like a fish out of water and to some extent an impostor.

Capheus heads to his political rally and he's still extremely nervous. Lito and Capheus may be sharing the same emotions but it's Jela who gives Capheus the advice he really needs, "just drive the bus".  It's a great reminder of just how close Capheus and Jela are, because the relationship has been de-emphasised somewhat this season; even as it serves as a reminder that Capheus and Lito have work to do so that they can be to each other, what they are to the others in their cluster. Much of the difficulties in Capheus's life have been about sectarianism and so he starts his speech by talking about how both he and his BFF Jela are both of mixed heritage but feel no need to discuss their differences because they don't matter at the end of the day.

Lito has left the party and is sitting alone on a beach when he is joined by Hernado. All of Lito's life he has actively sought out the limelight but this new leap is something he is having difficulty negotiating.  Lito is insecure because he's not only worried that he doesn't fit in but because he fears he doesn't have the talent necessary for this role. Lito is quiet, but Hernando guesses right away what is wrong and is instantly supportive.  Hernando invites Lito to strip off his clothing and swim with him. It's not long before the two men are acting out the famous beach scene in From Here to Eternity.  It's sensual and beautiful and one of the few sex scenes for Lito and Hernando without The Fetishist.

Things are going well for Capheus and there are even a few other sensates from different clusters in the crowd.  Suddenly, a riot begins and Capheus is whisked away by security and separated from his family. Will shows up but he's higher than a kite and not of much use. Thankfully for Capheus, Sun shows up and he makes it out okay thanks in part Githu. Capheus isn't certain that he's safe at first because even as he drives away, Githu continues to point a gun at him. It's Will who notices that the safety is on.

The other sensates arrive and are not pleased that Will is too stoned to be of real help.  Riley makes a point of telling Will how much they need him.  Will promises that this will never happen again.  A chastised Will gets out of bed and shaves for the first time in a long time. When Riley returns, the two embrace and kiss.

Having successfully kept her cover, Sun is prepared to go into battle. The members of Sun's cluster believe that the best path forward would be getting her brother to confess but are prepared to go all the way to the end should he maintain his innocence.  Surprisingly, Kala, who is always the first one to suggest that violence shouldn't be an option is on board with Sun doing what she needs to do to come out of this on top. It signals just how much Kala has changed since her interaction with Wolfie and the rest of her cluster.

As much as I love where this story is headed with BPO, it feels like If All the World's a Stage, Identity is Nothing But a Costume, is just the break that was needed. Sun's big confrontation with Joong-Ki is going to epic, now that her cluster is on side. Of all the female characters, Sun has been the most active since the start of Sense8.  Even though Sun is isolated and in so much pain, she doesn't run from her pain and instead runs towards it. Sun is strong in so many ways and is easily one of my favourite in her cluster.

I really like the juxtaposition of Lito and Capheus.  As aforementioned, these two really haven't interacted before.  It's like they don't really have a connection though they have the ability to visit just like everyone else. It interests me that they came together over feeling like impostors - two sides of one coin.  I really hope that this is the start of a more meaningful interaction between them. The two men of colour sensates really should have a closer connection.

I'm going to admit that almost from the beginning I've wanted Kala and Wolfie to be together.  I think that Kala's religious beliefs are extremely important to her but at the same time, she feels pressure to lead a certain life and that includes Rajan. At this point, I think only her father would be supportive of her decision to leave Rajan because her mother clearly wants Kala to simply quit working and have a baby.  It's important to note that a relationship with Wolfie won't bring her freedom but the choice itself is emblematic of Kala choosing to put her wants and desires first.  There's also the issue that these two have some of the most amazing chemistry on television. They just work. I'm far more invested in Kala and Wolfie than I am Riley and Will.

Okay, we have to talk about Will, who's addiction came between him and helping Capheus.  The rest of the sensates were clearly disappointed largely because they have looked to Will for leadership. Sure, Will's breakdown was inconvenient, but the man has just lost his father, leaving him with unresolved issues and it's not like he went to treatment for addiction.  Yes, Will had a good reason to take heroin but that doesn't mean that addiction wouldn't be a byproduct of that choice. Choosing to remain high meant that Will kept his entire cluster safe from Whispers and instead of recognizing this, they attacked him for not living up to their standards. At some point, Sense8 is going to have to get real about addiction. Will promising to do better shouldn't be enough to have him stop chasing a high that his body has clearly become dependent on.