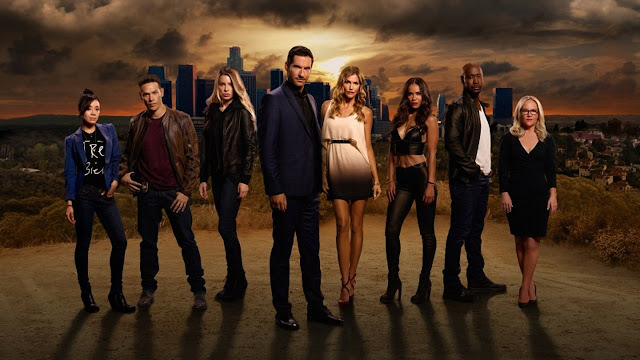 Lucifer is more focused on getting all the pieces for his new burny sword (honestly, I’ve always wondered about burning swords. I mean, you’ve been stabbed – while I’m sure burns don’t make things any better, if you’ve been stabbed bonus cauterisation isn’t necessarily going to make it worse either) – and one of Charlotte’s client’s insists that he can get it. We see just how little Charlotte understands of humanity (very little but it’s hilarious to watch Amenadiel and Lucifer watch her be conned – though I really have to question how she’s functioning as a lawyer if she’s this naïve) before her contact and client inconveniently gets himself all murdered: their money and sword-piece missing

So that’s this week’s murder –which means dragging Chloe in with less than subtle manipulations from our celestial gang. I would say that they must be better than this – but has Lucifer ever had to manipulate someone who isn’t prone to his demonic charm?

Charlotte is following them around the whole case because she is interested in getting the sword piece back and really doesn’t give a damn about the conflict of interest in investigating her own client. Chloe is concerned but since Charlotte’s actually providing useful insider info and has the tickets to get where they need to go… she also makes not-so-subtle comments about being a very different person from the original Charlotte.

Investigating takes them to a party – Charlotte and Chloe and Charlotte takes several pot shots at Chloe’s clothing so of course she shows up dressed to the nines. This is a rule. I do like Charlotte’s respectful nod – sure she’ll snark but she’ll concede when she loses a round.

Following Chloe’s plan, Charlotte spills to Bianca that her son is suspected with murder to which she has a word with her most incompetent son about A) killing one of her best people out of ignorance and b) leaving his phone behind with lots of compromising information. Oh Bianca, it’s one thing to raise a murderer, but to raise an incompetent murderer? Shame, shame, shame.

Speaking of, we also have to cringe over Chloe pretending to like Chet’s music. They do learn that the phone I super important because the not-very-bright Chet has uploaded all of his mother’s illicit business dealings onto it. Bianca knows this too – so tries to get Charlotte to get it back with the offer of the sword piece she’s so desperately after

Which involves Charlotte interacting with the oh-so-awesome Ella who is just so sweet and innocent and easily manipulated. But Chloe catches her and after an exchange of near truths and lies, Charlotte sees Bianca while wearing a wire.

Um… she’s still Bianca’s lawyer… this is so unbelievably unethical – I can’t imagine this is going to end well for any real lawyer.

After the shenanigans Bianca is arrested and Lucifer and Charlotte get a key off Bianca and hide the fact from Chloe – to the safety deposit box and the sword part inside. Except there’s no sword part – only a book in ancient Sumerian which Amenandiel can read since he actually works and studies rather than Lucifer’s slacker ways (Lucifer can speak all languages – but not read them). Charlotte is not impressed by a book – she’s desperate to go back soon given her light spilling thing. (Amenandiel gives Lucifer exactly the look he deserves for a “time of the month” joke)

Exactly how desperate Charlotte may become is shown when Chett meets with Charlotte – and stabs her in revenge for bringing down Bianca. Charlotte takes out the knife – and the holy light shining from her wound turns Chett into a charred corpse.

It looks like human bodies are just not great at holding massive divinities.

Dan is all kind of lost, trying to understand Charlotte who is still playing with and utterly confusing Dan with her antics but ultimately sums it up with “I like you”. To try and get some understand he talks to Amenadiel where we learn Amenadiel’s issues with always being the second son and how Lucifer is always the favourite despite being a colossal screw up. Dan segues from this to them competing over everything – including women, which he links to Charlotte.

Charlotte herself tells Chloe she’s Lucifer’s step-mother which is at least a step closer to the truth and helps clarify the relationship between Lucifer and her other than saying they’re exes which, like Amenandiel, Lucifer finds so cringeworthy. Chloe also tells this to Dan – in between warning him ot be careful with Charlotte. Also how he’d totally be Lucifer’s sort of step dad if he married Charlotte.

Amenandiel continues his translating and finds the third piece of the sword is a key god gave his favourite son. With his huge daddy issues he assumes that Lucifer has it – furious and jealous and bitter… until he sees his necklace drawn to the sword. Amenandiel is god’s favourite son and he has the key much to his shock

A whole lot of people are supremely pissed at Lucifer this episode. Maze is absolutely incensed with Lucifer for making plans to run off to Heaven without speaking to her – completely abandoning her in the process. While Linda is in serious trouble for helping Lucifer escape a mental institution which is a definite no-no for a therapist.

Thankfully for Linda, Maze totally has her back and is perfectly willing to slice and dice anyone hurting Linda. Unfortunately stabbing people doesn’t solve ethics complaints.

Maze seethes at Lucifer, demanding he make Linda a priority for once – but the interview with the ethics board only gets much much worse when Lucifer reveals he slept with Linda which is, of course, deeply unethical (though anyone watching TV medical dramas is probably now in shock that sleeping with patients/nurses/other doctors/passing phlebotomists isn’t REQUIRED in the medical profession).

Maze and Lucifer finally have it out with lots and lots of violence after she compares him to his parents and sets his devil self off. In public (amazingly without anyone intervening). The fight each other to a blood standstill with lots of broken property. With them duly exhausted Lucifer tries to reassure Maze by telling her he never intended to stay in Heaven, he wasn’t going to leave her, he was coming back. This may seem reassuring – but it ultimately proves Maze’s point; he was playing his own angle, not informing Maze and manipulating her to use in his plan without talking to her. He used her as a pawn

So how to make Lucifer realise this? To Linda. Who learns how screwed her career is and, given she’s not practicing therapist anymore, feels free to tell Lucifer just how terrible a friend he is. I am so glad this has finally been addressed after such a long time – Lucifer does use people all the time. I like to see a challenge to this

Maze also goes to see the nice ethics man investigating Linda. I don’t know what she does but I guess it involves stabbing.