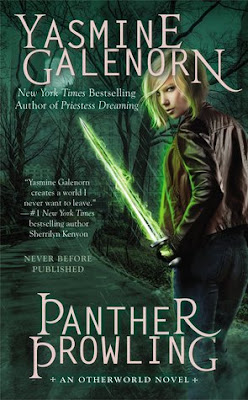 Delilah is ready to party – it’s her sister’s Camille’s birthday and Menolly has just managed to re-open her bar; in the lull in the war in the Otherworld they can have a break; a night off

Until their human cousin, Daniel, runs into their bar chased by an angry Viking ghost.

Unfortunately their professional thief relative has acquired a cursed and haunted sword – which comes with a family curse and a whole lot of dangerous haunting and consequences which only his magical cousins are equipped to deal with.

This series is huge. It has run for a huge number of books. It has an absolutely enormous cast of character. It has a huge world setting – several huge world settings. We have several metaplots all running alongside each other, all intertwining and related and touching on each other. And we have three protagonists all with their own lives and conflicts and relationships. We have a household that not only has the three D’Artigo sisters but has Camille’s three husbands, has Menolly’s wife, has Delilah’s husband. We have Hannah and Vanzir and Rozuriel and Iris and her husband and her twins and Chase and his daughter and then the gargoyle Maggie. And all of them have things going on. And this is without looking at Roman, Rozuriel’s ex-wife, Smoky and Shade’s extended families, the fae queens, Morgaine and the whole Arthurian legend group, the various powers of the Otherword and then loads of friends and neighbours dotted around the city…

We have a lot. We have so much. This world is huge and rich and full of lots of important characters each with their own stories and enough details to give each of them a realness and a presence that gives the whole story and world depth

But my gods there’s a lot. And when we were introduced to the sisters’ human family a couple of books ago part of me cringed because there was no need for this to add to this already very full world and these sisters’ already very full lives with very full missions. Especially when it turns out that dear brother Daniel is a master thief ex-special forces magical specialist – which means that’s a whole lot more complexity and storylines and distractions added to what I already a very full series.

Which is the feeling I had through this book – we had Daniel and the sword and Viking ghosts to try and deal with but it felt very peripheral to the sisters’ lives. And we had moderately high stakes to make sure they pay attention to it –but it felt like a distraction because there’s a lot of other things going on. In fact, the attack on their house almost felt like a way to drag them into the story again and make it all feel more relevant to them since we haven’t really built that much relationship with Daniel yet. With Camille’s new role with the Earthside Fae courts and Delilah’s issues with the Autumn Lord which also includes some expanding powers and possible consequences and we have love triangle issues with Hannah and Rozuriel with more looking at what it means to be an incubus since we’ve been mentioning it for a while but never really seen it developed. And there’s some sorcerer following Camille around which is important or worrisome but it’s mentioned at the beginning and we don’t really return to it. We add in a dose of

All this time we still technically have the War in Otherworld and with Shadowing but I think the last time that played a relevant role in the book was in Haunted Moon – book 13; it’s now on book 17. And I get having breaks or occasional distractions but this is a very long deviation from the main metaplot especially since it’s so random, unrelated to that main metaplot and just feeling quite random an inclusion. It also kind of leaves me wondering just how much supernatural activity there can be in Seattle – because these aren’t things specifically targeting the sisters or because of the war – it’s just random supernatural stuff happening in this city ALL THE TIME.

It’s not that this is a bad story – far from it. In fact I think there has been a greater improvement on pacing as well. It doesn’t feel like as much time is spent on describing which car they’re going to drive or exactly which route they’re taking or exactly what food they’re eating. I mean there’s some of that – there always is, it’s part of the style of books – but it flowed better. The whole concept of the ghosts and involvement of the Elder fae and the legends and curses all worked really well together to make a fun story all within this awesome world that is so rich and layered and has fully drawn on 17 books worth of world building.

But it still feels peripheral, unnecessary and distracting from the main plot lines of these books – the D’Artigo sisters’ human cousins feel like a distraction and unnecessary addition to something that is already so huge.

On inclusion we do have Menolly who is bisexual and married to a woman  - Narrissa is also bisexual. They actually use the world which is so rare in fiction – usually we get assumption or euphemism. Menolly and Nerissa are having relationship issues but they’re very based on Menolly’s personality and issues than with her sexuality. I do think we have a dubiousness with the idea that they are monogamous with each other – except for men, especially since Menolly’s relationship with Roman is definitely not casual.

We have a dubious brief visit for the occasionally seen Gay Maris friend – but he turns up to talk about his activism for the fae which he draws a lot of gross appropriation comparison to LGBT rights – only makes it even worse by saying “I won my battles” so now he’s fighting for the fae. Which both draws a direct comparison and appropriation between LGBT people and magical people eating-creatures and implies that the battle for LGBT rights is a done deal. If this is what we’re getting in that 1 book in 10, two second appearance of this Maris than he can still invisible.

We do have some fae who are dark skinned – because every character bar a very few are not human and don’t necessarily parallel to human cultures, ethnicities or races. Morio is Japanese though as an Earthbound supernatural. Trillian is a black skinned fae, Shade has brown skin and is clearly described as a man of colour. We also are introduced to some of Delilah’s fellow death maidens some of which are women of colour but at the moment they’re really only names so far (and this was something else I’d love to see developed more than these distractions).

Basically it’s a good book with excellent characters in an amazing world that has had 17 book to just grow larger and larger and deeper and deeper and richer and richer which I just love. But we’re so far off topic at the moment and I’d much rather see these characters get back on path rather than expanding every further to an ever broader cast (necessitating more and more recapping).