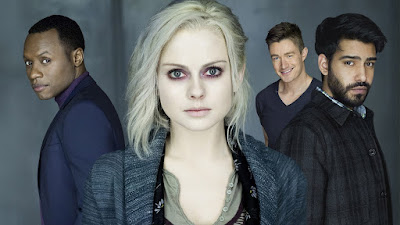 Wow, a whole lot happened in this episode – so many new side storylines were raised that I wonder just how broad this is going to get especially since there are only 4 episodes left; this is a lot of storylines to prune and deal with.

The crime of the week is that of a DM who plays Dungeons and Dragons. Of course, Liv eats his brain and we’re treated to a rather bizarre idea of how a Dungeon Master acts, including rolling D20s to decide whether she does anything and feeling a desperate need to narrate everything.

Add to that we have a group of players who are pretty much stereotypes – including all four men being utterly obsessed with the single female player. There’s lots of theories and possibilities over who has killed him and why – including the love quadrangle, the idea that they murdered their dungeon master because he killed their characters, the amount of money and expensive items he had and, apparently a secret room he had with computer plans for a Russian nuclear power plant – so now shortage of motives.

Liv helps with visions and to help prompt them, Liv, Ravi, Clive, Major and Peyton all play a game. I have played many of these games (albeit with D10s because White Wolf Gamer) and every single player in my group is of Peyton’s “let’s kill the quest giver and rob them of the reward” mentality. The visions are helpful but more Clive really gets into it which is a nice touch on top of the stereotyping by having Clive realise how much fun it is (also nicely subverted with Ravi, the nerdiest, sneering at nerds and looking silly because he is the nerd already).

All this investigation goes nowhere though because the case is taken off them by the FBI – who believe that the Russians killed the victim because of cyber crime. The FBI Agent is… Dale Bozzio. And yes, she and Clive has history and Clive definitely has feelings for her still – resurrected storyline!

Ravi visited the anti-zombie group this week and they have a plan to watch suspected zombies – including the mayoral candidate (who is a zombie). Which definitely makes Ravi nervous. What makes Ravi more nervous is their plan to kidnap a zombie, starve it and then photograph it when it goes all full-on-zombie scary. Ravi quickly tells the group who he is – and they verify his credentials as a medical examiner and ex-CDC and warns them that a single scratch from a zombie is contagious – so trying to kidnap one and hold it could very much start the zombie apocalypse they fear. Instead he promises them a vaccine – which is a total lie but will hold them off. They appreciate that because a whole lot of the anti-zombie group aren’t that far gone and are not in for kidnapping. This, apparently, includes Rachel, a photographer who makes friends with Ravi.

However, Blaine is doubling down on his new business empire, taking control and introducing Donny and Donny’s minions to his new product – a brain soaked in Ravi’s blue goo which intensifies and lengthens visions. He’s soaked a brain for much longer than Ravi which means even a sliver of brain produces super intense amazing visions. Donny’s minion is super impressed

But Donny, which his usual intelligence, eats far more and is utterly consumed by visions, acting them out and running out to the streets. There he is found and captured by the anti-zombie brigade who wants Ravi to provide tranquilisers.

Check in on major – he’s found that Ravi has been hiding all his post from him. It turns out that he’s been receiving a lot of hate mail from people because they think he’s a serial killer. He is also concerned that no women will even talk to him any more leaving him no options for romance (which I find dubious – because he looks like Major). Until he finds one letter from a woman called Shauna who offers a sympathetic ear since she has also been falsely accused

He’s initially way but as he’s left alone and lonely, he calls her and she decides to come meet him, alone, a complete stranger, at his house after he’s been accused of being a serial killer. Oh someone needs to watch more horror movies.

Why is he alone? Because Liv and Justin are going on a date/fundraiser for the zombie mayor (I can’t remember if he’s a mayor or he just wants to be a mayor) and Major can’t come because of the whole serial killer thing being bad press. Liv is also desperately fighting her brain – which this show needs to remember. Remember when Liv knew what brains did to her and resisted them? Because this entire season she’s kind of just run with whatever the brain does to her.

At the party she meets Chase, new head of Fillmore-graves and sees that he’s  lot more gung-ho, a lot more suspicious, against her being friends with Ravi because he’s human and generally going to be a problem in the future.

The party/fundraiser is going well until the mayor is shot – protecting his child from the gunfire. Liv has to talk him down from turning full-on-zombie in the middle of the party. Anti-zombie group? Russian Spy? PR ploy to increase his poll numbers? (I’m betting on the latter, I’m cynical).

One last visit with Blaine –who continues to torment his dad – but he’s going to have more concerns in the near future because Stacey Boss is back in town – and he’s already tried to kill Blaine a couple of times.

So can we count the storylines now:

Clive and Dale
Ravi undercover & Rachel
Blaine and his new business venture –including whatever he is now
Chase, the new Fillmore-Graves head who is a clear Problem
Peyton investigating whether James Weckler is actually guilty
The Return of Stacy Boss
Major and Shauna
Liv and Justin

That’s 8 storylines, only one of which actually involves Liv –that’s a lot to digest for a show that only has four episodes left. I’m surprised that so many of these have been started so late in the series