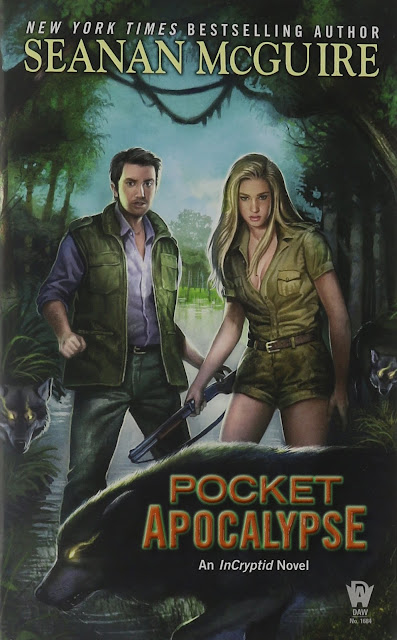 Alex, the God of Scales and Silence, has been asked by his girlfriend Shelby to help with a problem in Australia - her home where her family still fights to protect Cryptids

They’re having an outbreak of werewolves.

The Lycanthropy-W disease is one of Alex’s worst fears and one of the most devastating things that can afflict a country; especially Australia that has never had an outbreak before.


This book takes Alex and Shelby to Australia. I was struck with their being one major, vital point about Australia. There are no Aislinn mice in Australia.

I mourned, I sulked, I pouted, an Incryptid novel without Aisline Mice is clearly sadness. Until:

“One foot bumped my rolling suitcase, which gave out a faint cheer.”

Obviously, with the InCryptid series, there are a lot of things I’m going to praise every book, repeating over and over again. I will always praise the world building, the concept of cryptids and how they fit into the world and how they fit into the natural ecosystem. I will alway praise how incredibly creative they are but also how they fit so excellently with the cycles of the world - like how hunting therianthopes caused lycanthrope-W disease to spread because of the clumsy hunting of the Covenant, or how hunting unicorns caused the spread of cholera.

I will always praise the writing with its excellent pacing, the excitement of the action, the awesomeness of the personal relationships, the excellently presented world buildings, and the perfect inclusion of humour among the science and fun. I am always torn between both not being repetive in my reviews while still having to mention this every book because it would be remiss of me not to remind everyone of the awesomeness

And the Aislinn mice. Who are awesome

But aside from the standard awesomeness of all of the above, I also like the exploration of a, well, a morality spectrum, how the 36-ers differ from the Price family in power and resources and in attitude, and an examination of Alex’s own morality and how he has reacted to the 36-ers own attitude

It’s interesting to see how conservation of Australia’s delicae island ecosystem defines what the 36-ers do (which is understandable since it’s extremely important for real world Australia to preserve their own ecosystem from invasive species)  but how that doesn’t exactly extend to sentient Cryptids - especially “invasive” ones. Which comes with a lack of respect for their personhood and cultures and, of course, a blinkered spot in realising that European colonists are the ultimate invasive species. There’s the horror of condemning a sentient being as a monster - and even without condemnation or killing, just the basic evil of not treating them as people with the same emotional connections (this is seen so excellently through Shelby whose opinions have shifted so dramatically).


But how far does Alex go? And the Prices in general? There’s one thing about refusing to condemn any cryptid as a monster - but to what degree does embracing everything around you mean hugging the creature that is trying to eat you? These are excellent topics

But we also see the wonderful curiosity of the Prices, not just their compassion. Just a simple scene like Alex knowing more about the plant life around Dee, the Gorgon’s home than she herself does - because the Prices believe and explore and embrace just about everything. It’s wonderful how little scenes like this are used to excellently characterise the different positions and philosophies of the various cryptozoologists and cryptids

The Aislinn mice are also awesome - and so much more than being just comic relief - their poignant, meaningful, powerful relationship with the Prices that is, yes, incredibly funny, but also deeply important being both a permanent record of the Price family (incredibly useful as proven here) but also a sincere responsibility on them to. I love that Alex doesn’t just regard the Mice as a silly obstacle he has to navigate around but also a sacred trust to respect and revere.
I love the mice. I love them so much. Anyone want me to rate their books highly? Pay Seanan McGuire some royalties and include Aislinn Mice.

Obviously with Shelby and her sisters we have a number of women who can easily go toe-to-toe with Alex. We do have a point of emphasising that the 36 society is very racially diverse but I don’t think a whole lot of that racial diversity made it past the crowd scenes. We did have Dr. a Wadjet, of Indian descent who made it abundantly clear she was Australian and played a significant role while making some sharp points.

Most of the mythology also drew heavily on Aboriginal Australian beliefs

We had no LGBTQ characters

I’ll say again, when we shifted from Verity to Alex I was disappointed because I did love the Arboreal Priestess. But I think I like the God of Scales and Shadows more, his greater academic lean, perhaps slightly less zaniness is balanced excellently by Shelby in a way Dominic never balanced Verity. His greater seriousness doesn’t make the book less zany, but rebalances it excellent - and his relationship with Shelby and the Price family is fun and nuanced and excellent

I suspect from here we will move on to little sister Antimony - but I do hope in the future there will be a book with all three siblings, and some cousins and the whole Price awesomeness.