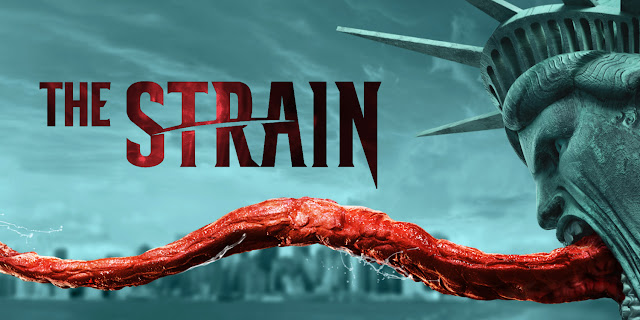 I honestly started watching this episode and I couldn’t quite remember what happened last season - then I remembered. Zach is the worst. The utter worst. In a pouting fit he decided to set off a nuclear bomb, because THE WORST


This caused a nuclear winter and we see Ephraim moving through modern day Philadelphia. The city, and presumably a lot of the rest of the world, or at least the cities, is run by something called “The Partnership”. A happy propaganda video tells us that since the “illumination” strigoi can now walk around during the now dull day and be equal partners in this wonderful utopian world where everyone has all the resources they need, there are jobs for everyone and so long as you keep your blood donations up to date, you get fully comprehensive health care in the “freedom centres.”


Ephraim himself has pretty much embracing defeat, doing black market doctor jobs (understandably, a lot of people are duly suspicious of the Freedom Centres) in exchange for trade items, though he still flinches when accused of profiteering but has generally lost all hope. He’s also still angsting over Zach


One of these trades ends up with him being captured by a Strigoi raid and transported away on a bus - which is then bombed.


Yes there’s a resistance. Ephraim objects fiercely to them blowing up a bus that contained human prisoners. I don’t know the name of the brother-sister resistance team but she has an awesome responds with:


“If we wait for the perfect moment to resist, we never will”. Which is brutally true. Her brother was injured in the explosion and Ephraim treats him… when he tries to leave she shames him for passive complicity with the Partnership. This clearly scores a bullseye (we’ve seen him struggling with the idea repeatedly, sounding out his fellow black marketeers about vague ideas of resistance while not willing to build up hope) and he agrees to stay.He claims for trade but we know he’s been pricked in the conscience


So, to Zach, the worst. Bizarrely, the Master (now in Palmer’s body, much to Eichorst’s disgust) is keeping him around and investing a lot of time giving him room, entertainment and training him to kill tigers.


Yes, he killed a tiger. Because Worst


The excuse is that the Master is keeping him around as leverage to make sure Ephraim stops Abraham and Quinlan  from moving against him (and saving humanity). Also he thinks if he brings Zach up to be a savage sociopath he would totally be an awesome host. Eichorst is very very very NOT happy about this because he wants to be the next host. Which is apparently awesome? I’m not seeing the advantage of this. But apparently it’s highly sought after. Eichorst is really jealous and really wants Zach dead and the Master points out if he brings Abraham, Quinlan et al and all the world’s nukes, giving Eichorst some incentive


Why is Eichorst wearing human make up? Given he doesn’t give a shit about Zach and the Master presumably isn’t bothered by his vampire appearance


He also keeps using woo-woo to appear as Kelly to Zach to convince him to do what the Master tells him and really, the Master has nothing better to do than to trick a kid into hugs?


They also get a young woman to be a cleaner for Zach - I spy a crush starting.

Meanwhile Vasiliy is running around the countryside with his love interest Charlotte (is she knew? Am I supposed to know her?) to try and find the remaining nukes in America. He has a gang of followers and, of course, Quinlan so the random bands of people scratching an existence out of the land are no match for them (it’s ok, they quickly establish themselves as rapists so they become justifiable targets. Because desperate choices for survival is much less complex if you can just throw in some easy-obvious-evil). Vasiliy is becoming super depressed and hopeless since they‘ve been doing this for 6 months but he keeps on fighting


Why is he looking for a nuke? Well, a) we know nukes kill Master vampires and b) by his dream, Abraham wants him to get one). I’m concerned we only see Abe in dreams


Doctor Who, Game of Thrones, The Strain: David Bradley is getting around!


While flirting in a corn field Vasiliy and Charlotte are kidnapped by a group of women who seem to want to sort of recruit Charlotte or at least just hold her at gun point, while Vasiliy gets chained in the barn next to a Black man called Roman who is apparently kept as a slave to do manly handiman duties


So… much… problematic… bullshit


This isn’t even like a plot line? The whole point of the enslaving kidnapping female collective is to introduce Vasiliy to Roman because he works at a missile silo - how very convenient! But really, you throw in a female collective expressly for one man to meet another man? Then sprinkle with a Black slave? No. No. Bad writer. Bad.


Ok… so… the first episode. It’s not awful per se but I’m not exactly thrilled for the fourth season by this, honestly? It doesn’t help that Ephraim, Vasiliy and Zach have all annoyed me so very much. The whole Zach storyline seems so pointless and Ephraim is just… gah… we’re just soooo focused on his pain for so long that more of his emotional conflict is about as appealing as a visit to a drunken dentist in the midst of very shaky withdrawals.

On the plus side the sense of the dystopian setting is really really well done - with just a few short, concise scenes we have a real sense of the world as it has become since the nuke: the propaganda video was so well done