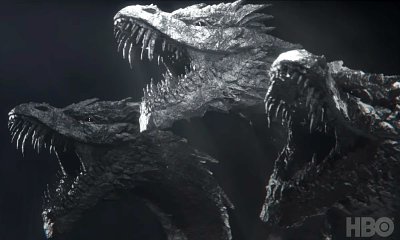 It’s back! And it has a previously?


My a lot has happened on this show. And a whole lot have died.


And many more are going to if Arya has her way. Because we open with Walder Frey who gathered his whole very very very very very big family to celebrate how they defeated the Starks. A toast to Victory! A toast to murdering pregnant women, and mothers of children, and guests you’ve offered safety to… at which point the gathered family realise they’re something up because it’s a very dubious toast. And then they all die to poison - except Walder Frey’s young wife who Walder stopped drinking


Walder then takes off his face and reveals, Arya. Oh yes, she just massacred the entire Frey family. Arya’s learning of Faceless Man skills has made her deeply terrifying


“Tell them the north remembers. Tell them winter came for House Frey”


And with a nifty flare for the dramatic.


Still to temper the ruthlessness as she leaves she runs into Ed Sheeren doing a cameo and a bunch of Lannister soldiers who are almost impossibly nice; reminding us that while kings and queens fight and kill and plot and scheme, the ordinary people on every side just want to live their lives and not fight these endless pointless wars. It’s a nice break of normality among the endless violence


We also have a scene of the marching horde of White Walkers, reminding us what’s coming. It’s almost as a scary as Arya


Bran and Meera have finally made it to the wall, bringing some ominous prophecy with them. This could be interesting because technically Bran has a stronger claim to the throne than Jon does.


Jon has gathered his followers and is an inspirational and passionate ruler. He has them gathering dragonglass to kill white walkers, has Tormund have the Wildlings defending the wall and the castles, he wants everyone over the age of 10 to learn how to fight: including women


Some object. But Lyanna Mormont agrees women should also learn to fight. I’d also back her against a white walker giant any day.

Of course, not one man dare speak against her because she’s Lyanna Mormont and can slay dragons with her withering stare. 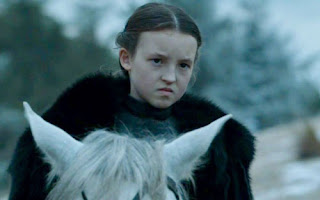 Next on the agenda is the castles of the Umbers and the Karstarks who betrayed House Stark. Sir Royce wants to tear them down for being traitors - he has a sense of honour and stupidity to make him a Stark, without the compassion. Sansa points out castles have done nothing wrong and are useful things to have. There follows a very public argument between Sansa and Jon: Sansa says give them to loyal houses as a reward and to punish traitors while Jon says the house has been loyal for generations and you can’t punish the current house leaders (who are little more than children) for the sins of their fathers. They argue and in the end Jon lays down the law and insists - before making a big charismatic speech which everyone cheers as they accept his new vassals.


Afterwards Jon is super pouty with Sansa for “undermining” him but she isn’t going to meekly take it. She, rather brutally but extremely accurately, says he has to be smarter than their dad and than Rob - and she’s not wrong. He asks if smarter means “listening to you” and she says that wouldn’t be so bad. She points out that Joffrey was a king who wouldn’t listen to people criticising or commenting either: Jon takes exception to the comparison but she says he’s nothing like Joffrey - and that’s not entirely a compliment: because whatever else he was, Joffrey was vicious to his enemies. She also has a level of admiration for Cersei who “taught her a lot”


This argument wasn’t resolved but I can see it rumbling for some time.


She also recognises (we also see how Jon, a northerner, cannot be buttered up) how sheltered she was before - and how unhelpful and useless that was.


I actually think they work well together - Sansa is smarter, more politically savvy and more ruthless while Jon is charismatic and impressed and good and noble (i.e. he’s a damn stupid Stark whose Stupid Good Alignment will get him both loved and killed, while she has honed a sufficient dose of Kings Landing ruthless politicking to keep him alive). And as for openly arguing - again, after several dictatorial rulers a bit of open descent and questioning isn’t a bad thing: especially since Sansa publically putting in a world will also touch on anyone a little wavery about Jon being a Bastard. Also, Northerners aren’t like Kings Landing - they speak out.


I want to see how this dynamic develops t
hough - Jon repeatedly silencing Sansa and pouting is not good, nor would Sansa becoming the quiet advisor be ideal. Though i do quite like the idea of him being good and Honourable and Starkish while she quietly moves around making deals, stabbing in the dark and generally making it work. The problem is I don’t think Jon is getting it, valuing her knowledge or seeing her points when she mentions Joffrey and Cersei


We also have Littlefinger trying to manipulate Sansa - and I think he is craftier than her but ultimately she knows what he wants (her) and is more than willing to use it. My money’s on Sansa


Speaking of Cersei, she’s now queen in Kings Landing, with Jamie her brother/lover by her side. Despite the loyalty between them all is not good between them - she’s furious with him for freeing Tyrion who is now allied with Daenerys. While he hears her talking about legacies and is aghast at her denial. They don’t HAVE a legacy. Their children are all dead - to which Cersei says Tommen “betrayed her” with his suicide… this just shows how far Cersei has fallen. Ultimately one element we could never deny about Cersei was the love of her children: now she doesn’t have that she’s going to be a ruthless player of the game without limits and, in some ways, without anything to lose.


But she needs Jamie’s military advice which is basically “we’re royally fucked”.
Daenerys is landing in Dragonstone to the East
Olenna and Highgarden hates them in the West (and they also produce a lot of food, useful in winter wars)
Doorne with the Sand Snakes lies to the South
And Jon lies to the North
Also Walder Frey is dead, the Boltons are dead, they have no friends.


She says she’s Queen of the 7 Kingdoms and Jamie harshly replies “three. At best” (Iron Isles, Castlery Rock and… the Stormlands? Yeah I can’t see them particularly rallying even if there is no Baratheon heir any more).


This is something I said from season 1, the Lannisters can never rule because they never, ever have allies: only people who seek to benefit from them who will always betray and turn on them. No one house can rule the Seven Kingdoms and no house will ever back the Lannisters unless they have a major philosophical change


Speaking of, the one ally they do have is Euron Greyjoy - oh look, a man happy to murder and betray. There’s a pattern here and it won’t go well for the Lannisters. He does have a very big fleet which is scary - but Jamie pretty much loathes him which doesn’t bode well for a long lasting relationship. He also wants to marry Cersei - incest love triangle!


Cersei’s not into this so Euron declares he’s going to bring her a big fabulous present to convince her. Uh-huh


In the Citadel we also have am who is learning to be a Maester - which means lots of grim menial labour and not a lot of reading books in the restricted section - and here he has no Invisibility Cloak. He does manage to convince the Grand Maester - who is clearly a very intelligent man - that the White Walkers exist, but he’s also not excitable: mankind tends to assume the world is ending awfully easy. He does sneak into the section and discover Dragonstone is full of dragonglass which could be totally useful.


Also on one level is a locked up and heavily diseased Jorah. Ok is he still relevant?


Daenerys is hoooome. It is quite dramatic and there’s a real sense of Daenerys being almost awed with this powerful sense of homecoming. I like the scene for it’s impact - yes it was long and nothing happened, but I think that silent home coming was needed to emphasise what Dragonstone means to the Targaryens. This is her home, this is where the Targaryens ruled, this is everything Daenerys has waited for.


I do kind of wonder where everyone is - what Stannis didn’t leave any servants behind?


Clegane is running around with the Red Priest worshipping Dondarrion. He’s being his usual charming, gruff self and also really not very having fun hanging around with a lot of fire worshippers. We also get to see his ongoing humanity, insisting on burying the bodies they find in a homestead (a farm house they’d been to before in season 4 when Clegane and Arya were alone together - and the farmer there offered Clegane kindness. Though he did steal from them - and here we see them dead, apparently from starvation). This is a really good scene for showing the layers of Clegane. A man who before just didn’t care, didn’t care about stealing from a poor farmer, who existed just for himself, to survive. And here we see a man with genuine regret for that moment. There’s always a lot of depth to Sandor Clegane


They also convince him to read the flames - and he has a vision: a big scary vision of all the  White Walkers coming

Anyone else get the sense that this season is going to be the season of ferocious women? Arya is a terrifying force of nature. Cersei is brutal and vicious in a corner, but definitely in charge. Jon leads the North, but Sansa is at least prepared to have one hand on the reigns and, let’s face it, can run circles around him in the political arena. Olenna and the Dornish are craftily and cunningly gathering their forces. Daenerys is, of course, the great hope and threat and even the Ironborn, if Euron is going to be undermined by anyone it’s by Yara and Lyanna is just the unstoppable force against which all must bow. The Seven Kingdoms are in womens’ hands.


Of course, part of the take away from this is it’s in the hands of women because most of the men have killed each other