The Skeleton in the Closet (Southern Ghost Hunter Mysteries, #2) by Angie Fox 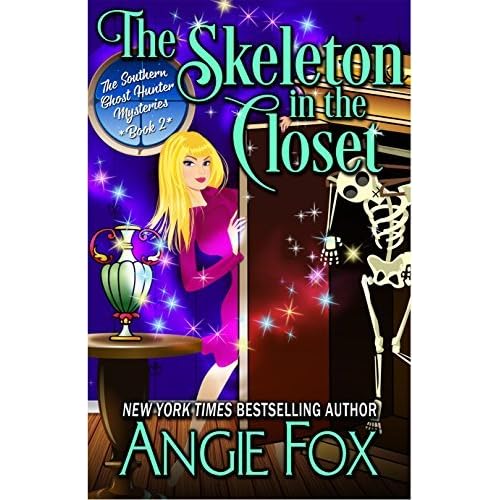 The small southern town of Sugarland is filled with excited people.  A documentary is being filmed by the history channel about a civil war battle that occurred in the town. The movie is to be billed as residents of the town coming together to fight off the invading Yankees, in order to protect their town from destruction. This should be enough excitement for a small town but when a local librarian is murdered to cover up an old secret, Verity has no choice but to get involved.

As you may have guessed from the book cover, The Skeleton in the Closet is paranormal chicklit.  It doesn't hide what it is or attempt to be anymore than that. If you go into expecting something light to while away a few hours with then you might just enjoy, Verity's latest adventure.  It's got a grumpy gangster ghost, a pet skunk, mixed in with a murder mystery.

Fox walks the line between exulting the antebellum south and calling it out for what was.  Fox makes it clear that "Tennessee was one of the most divided states in the nation, and our boys had gone off to fight on both sides".  In fact, Sugarland continues to be divided today based on whose family did what during the civil war.  The big elephant in the room however is slavery. Not once does Fox point out that the entire reason for the civil war was slavery, even if she has Verity (the protagonist) make it clear that she believes that the North was proven right in the end. Chicklit is meant to be light but if you're going to write a book about the antebellum south and how it effects the modern era, to do so without including characters of colour is beyond problematic. Where are the Black people in this story?

Fox didn't shy away from detailing the horrors of war.  In detail, Fox wrote about the surgeon who long after his death continued to operate on long dead soldiers. The surgeon continues to amputate limbs and his surgical gown is covered in blood.  Even though both the northern soldiers and the confederate soldiers are dead, both sides continue dehumanise each other.  It's a small lesson in how war teaches people to see those belonging to the other side as less than human and or civilised.

This is the second book in this series in which the victim is female.  I like that Verity is a strong protagonist who speaks her truth and stands up in the face of oppression and I like that she seems to have a lot of female support; however, having a woman as victim twice in a row has me raising my eyebrows.  Let's see if this trend continues.


Where Fox continues to stand out is in her discussion of class. A large part of Southern Spirits (the first novel in this series) dealt with Verity's struggle to pay off a debt and that involved her selling most everything she owned and living on Ramen Noodles.  Fox continues this struggle in The Skeleton in the Closet because though Verity has reconciled her debt, she still doesn't have a job and is effectively poor. Verity puts on a brave face but she's aware that one of her best dresses has a hole in the pocket and with only three dresses to her name, this is most certainly not convenient.  Verity continues to largely live on Ramen Noodles though her friends and neighbours do from time to time offer her a decent meal which she absolutely appreciates.  Fresh fruit is very much a luxury for Verity, so much so that she only eats half a banana at a time in order to treat her pet skunk with the other half.  The dollar store is where most of things that Verity purchases comes from.  Verity absolutely lives a food insecure lifestyle that is familiar to far too many people.

Fox also includes a conversation between the haves and the have nots. The Wydell's are the richest family in town and they are juxtaposed to Maisie, an illegitimate Wydell.  Maisie is so poor that her electricity has been cut off and she struggles to make repairs to her much older home.  Fortunately, for now, Maisie is able to hunt and garden to supplement her nutritional needs but as a senior, there's only so long Maisie will be able to sustain this lifestyle.  The only child of a single mother, Maisie has suffered all of her life with the stigma of illegitimacy and poverty and so rightfully resents her much richer relatives.

There's a small strain of romance running through The Skeleton in the Closet. Verity is developing feelings for the brother of her former fiance. Ellis we are told is the black sheep of the family because rather than being interested in wealth, he's kind, works as a police officer and is loyal. The scenes between Ellis and Beau arguing over Verity's attentions were absolutely meant to be read as comedy; however, I found it irritating because it reduced Verity's personhood to a prize to be won, rather than a person to be respected and loved.

There were times when I did find myself laughing out loud.  I absolutely loved Verity facing off with her would be mother in-law Virginia. Beneath all of that southern politeness a lot of hate exists. I absolutely loved the idea of weaponizing rhubarb tarts. Similarly, Maisie pulling out her ancient shot gun to fight back against her attackers and falling on her ass had me giggling. I will also never get tired of Frankie complaining when Verity rubbed his urn to get his attention as though he is a Djinn.

The Skeleton in the Closet absolutely has it's problems, including the erasure of LGBT people but it is largely a respectable example of paranormal chicklit. I didn't go into it expecting much, so I wasn't greatly disappointed overall. I'm going to continue with this series because I want to see what antics Verity gets up to next.