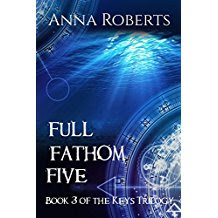 Blue, Gabe, Grayson, Joe, Charlie and Ruby have survived. They’re not happy, there’s the shadow of Eli’s corpse to clear up lying over Blue and Charlie and Ruby have a somewhat tumultous relationship. There’s the swamp wolves lurking over Joe and Grayson - and being a werewolf is never easy besides that
But Gloria’s last act seems to have taken Yael, the deep, dark, massive, dangerous spirit, finally out of their lives and out to sea
Until he is drawn home - and this time the depleted Keys pack is missing Gloria, their heart, their soul, their true Alpha, their wolf-witch. To face Yael there’s only Blue, brand new to this and reeling with both revelations from the past and Yael’s desperate yearning to be human

So… this book… this entire series puts me in one of those very very awkward ones to review.
I am impressed. I am deeply impressed by the writing. I am even more deeply impressed by the characterisation, their lives and how they react to the world around them. And I’m really impressed by the world.
The whole concept of werewolves and their struggle has permeated these books. These are beings from very poor backgrounds who rarely, if ever, get the chance to complete their education or get regular work (all those days off every month). Changing is painful, traumatising and hell on their bodies to the point where most of them are pretty damaged by the time they hit 30 and 40 is the far reaches of old age - 50 completely unattainable. The life of a werewolf is grim and painful and short.
And the Wolfwitches, even if not werewolves themselves, live among that. The same poverty, the same desperate, hurting people around them, and even if not directly affected, they’re the ones who clean up. They’re the ones who put the damaged, suffering wolves out of their misery when their bodies finally turn on them.
This permeates the whole story. Even when we see things like Grayson and Joe who are deeply in love and managing to carve a sense of happiness for themselves there’s still that underlying question: still the constant nag that Grayson is old for a werewolf, even his most loving moments undercut
It permeates the past of Yael as well - Yael and Gloria, their whole history laid out here needs to be seen in this context. Gloria, the poverty, the difficulty and in comes this spirit snaring her when she’s young and desperate and then being a constant shadow - adding deeper burdens but always coming with just enough power to be useful - until he’s just the burden, the predatory force
I like this in many ways because it humanises Gloria: she as the heart and soul of this series, the foundation, the one with Yael, the great evil spiritual force that everyone is afraid of - we see how it happened, how she first succumbed: and it’s such an easy, simple, human temptation. No woo-woo nothing like that - but simply a devil’s bargain offered to someone with few options
And I see a lot of great parallels for her in Ruby - a powerful, determined, intelligent woman who, nevertheless, is young a little foolish and seeking short cuts out of her grim situation. I think there’s a reason why these characters are presented next to each other. It also shows another reason why Gloria got rid of Blue - not just to save her from Yael possession but to save her from the temptation of Yael when she’s young. Because when you’re young and poor and angry in a very unfair life Yael looks very attractive. And how, even the best of us, at our worst moments, can wish for terrible terrible things.
I did wonder about West, Gloria’s son and Blue’s mother’s struggle with mental illness. Because it seems we took the damage of Yael and the desperation of the general werewolf’s lot, threw in the painful awareness of how being poor affected them all and a constant acknowledgment of how being Black added to Blue’s struggle and then just dialed it up to 11 with yet more grim darkness. I’m still kind of torn about both - especially since Blue’s mother’s mental illness is entirely a plot device rather than characterisation. But it does serve to make it clear that all the stuff they face? Not all down to Yael. There’s plenty of bad out there without deciding it’s all this spiritual nastiness

And we do have prominent minority characters, our protagonist is Blue, a Black woman and never once in reading her story is this forgotten or lost or how this affects her story not aking into account. We have Grayson and Joe, gay men in a meaningful, loving relationship, even as Grayson faces homophobia and acknowledges growing up a werewolf is awful, growing up a gay werewolf just adds to the burden.
I also really like how it finally centred what a wolfwitch is with Gloria’s memories, Blue stepping in with Eli and tackling Yawl, and Ruby moving on the swamp wolves. The wolf witch is she who gets things done, who clears up the mess, who pulls the trigger when no-one else can bring themselves to do so.
It’s all powerful and fascinating and really works together
But… but… it’s not fun to read. It’s actually really hard to read and by half way through I’m both very very impressed but also kind of wishing it was over.
Which is perfectly understandable, I mean that really. These characters lead really hard lives in really hard conditions and the best they can hope for is happy right now because, ultimately there is no happy ending here just by merit of what they are and what they’re doing and the world they live in.
But it’s not fun. Excellently written grim, backed by perfectly developed grim, in an wonderfully creative grim world with all kinds of justified gim and important grim and intelligent grim and fascinating grim is still… grim. And as we go through West’s past and Gloria’s past and all the awfulness of Yael it began to feel like work to trudge through more grim
Let me be clear about this - it’s an excellent book. There is so much that is so very very very well done. I is a great world, it subverts so many things that have become almost genre staples and requirements. It adds so much grim reality to werewolves in ways I’ve never considered before. It is a really excellent book, a work of art in the writing and with some real social consciousness. It’s an excellent book - it’s just not an easily read one.