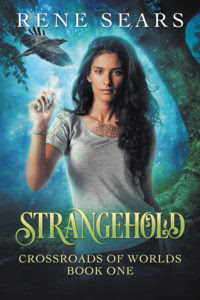 When Morgan’s fellow student committed a terrible crime against the fae, Morgan retreated to a relatively quiet, isolated life. She certainly didn’t spend as much time with her sister as she’d like - not after she married a fae lord and became an ambassador to Underhill.


But when her sister begs for her help shielding her half-fae nieces, Morgan can’t say no and plans to be a bigger part of their lives… until all the gateways to underhill close ujknown to all, even Falcon, a fae she finds trapped on Earth… and casters start dying.

This world setting is fun and, better, really well presented. I won’t say it has never been done before - fae in a close realm, portals, witches, magic - these are definitely not unknown


But the way this world is put together, the very careful exposition, the lack of info dumping is all really well done. This is a world that manages to avoid the temptation to throw it all at us. It lays out lots of potential to many many many more things in this world in a perfect balance of hinting. And that can be hard, so many authors have this Really Cool Thing and decide they must must must share this with us!


The characters know their world and never feel the need to explain it to each other - they experience it and through them we experience it, showing everything we need to enjoy this book


I think it also lays out a lot of ominous yet epic hints to encourage future novels, promising a big big series.


And it is fun, it wasn’t super twisty due to the length, but it was fun and well paced without any convoluted elements of padding. Morgan is an interesting characters, she has reservations about the fae but they’re reasonable without being over dramatic or based on some fantasy world bigotry. We have a nice amount of history and development to give everyone character - and a magical organisation which isn’t THE WORST. Honestly that is such an over-used trope.


If I had to point to an area of the book that is weak it would be Falcon’s motivation - or maybe Falcon entirely. I never quite understood why Falcon became as invested as he did. Perhaps if we were more in his head we could see him, for example, respect Morgan‘s dedication to her nieces. Maybe see more of his respect for what she’s doing and more concern for what has happened with the fae gates. Maybe even identify with her nieces more because of their similar heritage


Though, I also have to identify my own ingrained biases here. I’m not a fan of Falcon because he fits the mould of a kind of character I dislike. He has a manifold tragic past: mixed-heritage means he didn’t fit in, clearly on the outs with his mother, job which made him do terribad things he clearly feels The Guilts about AND he’s cursed. A male love interest with an angsty past to brood over is always a warning sign to me. A male love interest with SEVERAL angsty pasts to brood over sets the alarm bells off: warning warning, danger danger, soon he’s going to decide they can’t be together because he’ll sully her with his awfulness. Woe.


To be fair to the book, this hasn’t happened yet. And they’ve only really circled round the idea of them as love interests - but it’s going to take a mighty will to wrench this train off these well-worn tracks.


Diversitywise we have a dying mentor who seems to have a dead male love interest so he is gay or bisexual. Though minor and, yes, dying. Morgan is ambiguously described as “dark” next to her sister’s “fairness” which suggests more blonde and brunette than POC. We d have Saranya Ramachandran, a magical doctor and powerful force who has a minor role as well. There are really only 2 major characters in this book - and a couple of other somewhat prominent characters (Hawthorne and Morgan’s sister).


I am torn because a large part of me objects to it being so short. This world, this setting, these characters
So… I can’t complain about it being short when everything works, nothing is missed out and the whole story was nicely contained and well done?


Well… I can - because while everything worked really well and was so good that more could definitely have been a good thing. A little more of Morgan and her magic, more exploration of the fae, perhaps a stronger motivation for Rowan  - everything was good that a little more time to explore that good would have been more fun.I feel like I rested my feet in a really awesome water park - the water’s great so why am I only dipping my feet on


Of course it’s only one book in a series - a taster of so much more to come and it certainly does a great job of laying out what this series has to offer and encouraging us to come back for more.