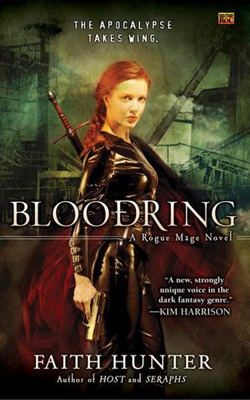 This book is huge. Not so much because of the length of the book but the sheer amount packed in here - especially this really original world.


Honestly, if someone has sold this book to me as a post-rapture word, a world after the book of Revelations, a world where the angels came down and massacred huge chunks of humanity, I would be leery.


But what about that world where the angels never confirmed any one religion? What about when the Most High never actually appeared (but pointing that out is a quick way to get dead)? What about a world where actually fighting each other over a religion is the quickest way to get you dead by angel?


We have a world where religion and religious rules have definitely risen to prominence, piety is common and all but mandatory (there’s a lot of pressure even when it’s not mandated) and religious laws dominate. But at the same time everyone is kind of uncertain as to what the laws need to be. One interesting element of this is that they seem to have avoided the very common trope of just defaulting to “sexual” crimes (probably because most authoritarian religion seems to devolve to that level) and we see a lot more fierce punishments for things like swearing. It’s an interesting and unique political situation with religion ascendant and in control but without the certainty or single religious dominance you’d expect from such a world


It’s also been several generations since the end of the world so humanity is doing what we always do - backslide. Thorn notes that things that would never have been tolerated 10 years ago are now creeping back into the human media


It’s also really well done how the balance is set out. Because it would be easy to portray the Seraphs as wonderful saviours of humanity - and that’s clearly the spin and there’s definitely a cult that has grown around them - but Thorn sees it as a cult. Equally the depictions of the Seraphs arrival and the end of the world is depicted as duly horrific. The idea that the Seraphs are all good and pure is strongly challenged despite the spin. At the same time we have the dark powers, the monsters from the depths, demonic forces et al that humanity and the Seraphs allied against - so we do have the seraphs as being humanity’s protectors and destroyers, humanity’s shield, but also the sword which could come down at any time if humanity break the rules they’re STILL not entirely sure they understand. It’s all complex and nuanced and precarious
Add into that is Thorn, a Neo-mage. A woman with magic and, by official doctrine from the Seraphs, soulless. Registered and sequestered, Neo-mages are both an incredible asset to humanity for their skills but also feared and persecuted when unlicensed and not in their official communities. Thorn is surrounded by neighbours who would murder her if they found out about her while at the same time seriously considering hiring mages at exorbitant cost to help them with the town’s problems.


Oh and the world is a dystopia - not just because of the end of the world which means there’s a lot of salvaging and a lot of things mankind just doesn’t have the numbers to produce any more and is now working to produce in numbers what was once taken for granted. There’s no suggestion the technology is lost - it’s just hard to maintain the supply chain and production methods with most of the population dead. But the world is also entering a mini ice-age which doesn’t just mean cold, but also worries like glaciers forming in the mountains above the town


Throw in demons coming out at night and haunting the world and we have a much scarier world - and, obviously, an equal dependence for the decimated population on the Seraphs.


But in a book? All of the above is huge and complex and fascinating. And then we see different neo-mages with different powers and different sources of power - with the added complexity of elements from other specialties draining them (Thorn, a stone mage, is drained by water and moonlight). Then we throw in the descendents of humans and Seraphs, the descendents of mages and humans and the mixing of these blood lines all creates different complexities - and on top of that the dark side also has it’s own different forces and bloodlines


I love the world, but sometimes I feel like I need a guide to read separate to the story as it can be hard to follow all the ins and outs and complexities. This is sometimes not helped by the writing - especially when Thorn is deep in her magic and bonding with stones, I’m not always entirely sure what has exactly happened. This is especially the case later in the book towards the end with a grand finale where Thorn faces down the big bad hordes and it’s epic and it’s amazing and it’s exciting and powerful and… and I only have the slightest clue about what actually happened.


I think it did add even more complexity over what the Seraphs are - but I was too lost in it all to be certain. It still felt epic and the victory was clear but what exactly Thorn did? I’m not sure, I’m really not. Too much abstract, too many things going on.


The plot itself is a wonderful exploration of this world - and I think you needed a whole book on that. We largely focused on Thorn just living in this world with her friends. Which is excellent because this world is HUGE so huge, so very huge.


We have a mystery: someone has been captured (Thorn’s ex) and they want to get him back and stop the big dark evil things doing their evil worst but most of Thorns’ day and experience isn’t spent on this particularly. I think this works because the world is big and complex and, if anything, needed paring more for this book (the amethysts in particular were damn confusing)


I do like Thorn’s relationship with her friends and colleagues, all of whom work in stones and jewellery. There’s Jessie with her large family who has her own complicated past with religious society though is something of a minor character in her circle which is sad because she and a child and a very very distant woman mentor are the only women in Thorn’s life and we need more women in there. We have , Thorns’ best friend who is a gay man. I started out somewhat hostile to this character because he is introduced with a whole lot of dubious code words “flamboyant” “theatric”, an over-emphasis on clothes and make up. He loves musicals - in a dystopian world which doesn’t produce musicals ad doesn’t seem to have an excess of recorded media. The almost odd part of thi is it fades as the book goes on: it seems less to be character development and more that the author kind of forgot he was gay and the coding she’d already established. We have Audric who is one of these woo-woo half-breeds, a Black man and in a relationship with Rupert. Despite Rupert being her BFF, since Audric is the one who is actually aware of her secret than the others so is more prominent than the other characters. But part of the woo-woo apparently involves some unspecified genital deformity which, again, it’s implied makes him sexless. It seems an unnecessary addition to make it so expressly clear the gay couple cannot be sexual - especially as we’ve introduced the completely unnecessary concept of the mages entering highly sexualised heat. This used up way too much time of Thorn fighting supernatural horniness.


I’m fascinated by this world and curious by these characters. This book was probably too full, too overwhelmingly full, but what it was full of was absolutely amazing and  loved every last minute of it. Just reading this first book makes me think this series can become one of my favourites - all the more likely as it develops and I become more familiar with this huge world