This episode I am reminded of the action pack awesomeness of last episode - and also how quickly things need to move, especially since there are only 2 episodes left this season


I see this and then I see Ser Jorah and Gendrey and Sam and I have to fight the urge to tell them all to go away. You’re distractions. You’re not needed!


So we have a whole lot of dead soldiers after the dragons had the most overcooked BBQ since your dad’s last cook out. Tyrion is there and rather traumatised by the horror of it all. And then things get a little more worrisome…


Because Daenerys demands everyone bend the knee or die. The Tarly’s (Sam’s father and brother) refuse. Tyrion pleas for mercy from Daenerys, pleas for the Tarly’s to bend (since they just betrayed Olenna so they’re not THAT loyal). But both are inflexible… and Daenerys has them both burned alive. Oh, yes, Dracarys is fine.


This makes everyone else kneel.


Really, it’s not that far from what Daenerys has pulled before - brutal deaths for the disloyal and those who challenge her are pretty much par the course with Daenerys. Tyrion knows this - did he think she’d adopt new rules now she’s in “civilised” lands? Did he think she’d change when in “proper” countries of Westeros?


Of course I can definitely see the worry that while pleading repeatedly for Daenerys to be a gentle, merciful leader - the very reason why so many follow her (apparently) because she is kind (to people who are super loyal to her anyway). At the same time burning people alive is exactly what her father,  The Mad King Arys loved to burn people alive.


On the other hand - they betrayed Olenna. 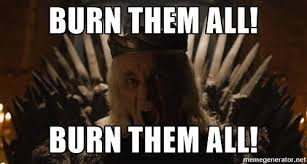 Varys and Tyrion talk about this- both drinking and both clearly shaken. Tyrion, spin-master to the end, tries to downplay Daenerys burning people to death. Varys is very shaken -he served the Mad King, his spies dug out people the Mad King then burned to death. He has a truly haunting recounting of how he tried to deny he was responsible while clearly feeling very guilty for that. And now he’s seeing Daenerys heading down the same path and dragging them with him.


But she’s not the Mad King. Yet. That yet is their mission.


Because you know Varys has read it. Of course he has. He probably read it before Bran even wrote it.


Daenerys also introduces Jon to Dracarys - and Dracarys bonds with his new step-daddy (I’m going to put this down to Jon’s Targaryen blood). And Daenerys discusses how she regards them as her children. Jon is discomforted by all the killing but Daenerys points out Jon’s wars to liberate Winterfel have hardly been bloodless: it’s fine to protect the people but you need to be in a position of strength in which to do it. She’s not exactly wrong - and nor is death by dragon any less dead than, say, death by sword.


He also downplays the whole coming back from the dead thing, just in time for Ser Jorah to come back and re-pledge himself to Daenerys. I get that I said this is a distraction but I really expected a more dramatic reunion here.


That message from Bran is that he has done his raven thing and seen the armies of the dead in all their huge numbers and they’re getting awfully close. Jon hears this and naturally insists he has to return north to which Daenerys tries to pull the “excuse you I’m queen” and he pulls out one of his many many good speeches. There’s a lot of charmisma and chemistry there. He makes a last plea for her army but she says she can’t because she’d be handing the 7 kingdoms to Cersei


So they hatch a plan of capturing a Wight and showing it to Cersei to prove that they have bigger and better things to worry about.


Jamie and Bron also lived because of course they did. And Jamie is also pretty shaken because he’s realised that Daenerys just destroyed an entire army with just one of her three dragons. In the words of Bronn, they are fucked. And yes he says “they” because he’s offski if it comes to fighting dragons. They return to King’s Landing to pass on the bad news to Cersei. She tries to spin it with a mix of denial (we can hire mercenaries for the Dorthraki to slaughter!) and brutal realism: surrender isn’t really an option here. It’s die fighting or die after surrendering.


Oh and she learns about Olenna killing her son and tries to deny it because she hates Tyrion that much and really wants it to be him. Jamie convinces her by pointing out Olenna would much rather have Margaery marry the easily manipulated Tomen than the downright evil Joffrey (and for a brief moment it looks like Jaime almost accepts his eldest son was evil).


Part one of Daenerys’s plan to get Cersei on side is to use Davos’s smuggling skills to sneak Tyrion into a meeting with Jaime to plead their case. Of course the reunion between the two brothers is emotional - and not easy. Jaime is not in a place to forgive Tyrion for killing their father no matter how much Tyrion is fully justified in his hatred - he cuts off Tyrion’s litany of hatred against his father and demands to know the reason.


Jaime then takes this cease fire to Cersei… and the number of times Cersei suggests Bron betrayed Jaime and Jaime betrayed her by just talking to Tyrion is a more than a little frightening insight into where Cersei’s mind is. She does agree though - only because she thinks they can use cunning plans to defeat Daenerys


And she has extra motivation now - she’s pregnant. And she’s going to openly name Jaime the father - Jaime is more moved emotionally than worried. Though he is a little of the latter but Cersei pulls out their father’s line “the lion does not care about the opinions of sheep”.


Is this is enough to cement Jaime to her side? I still think the Kingslayer may become the queenslayer.


While Davos was in Kings Landing he also pulls out Gendrey - Robert’s blacksmith bastard, who passionately joins the cause to kill Lannisters with his great big hammer.


At Dragonstone everyone makes their farewells (including all-but fiancees John and Daenerys) with John, Gendry, Jorah all planning to head north of the wall to kidnap a Wight. Yes John is doing it himself because the king has no concept of delegation. They’re also joined by the Hound and his whole band of Lord of Light followers who happen to have made their way to the north and be imprisoned. Because why not. Seriously, Game of Thrones these side plots need to be trimmed. And the king needs to start delegating this stuff


Which brings us to Winterfell


And more annoyance. Look Arya and Sansa have been back together for a hot minute and already they’re snarling at each other. And I’m totally Team Sansa here. She recognises that she has a delicate alliance of several forces who are not particularly happy to be working together and who John has pissed off by disappearing. She can’t silence them and she certainly cannot behead them all.
As for positioning herself to take over if John falls… uh, yes? Since Bran has taken himself out of the running, she is the heir. It is APPROPRIATE to gather support and be prepared to take over especially with the damn king keeps gallivanting onto suicide missions. This isn’t callow ambition, this is sensible precautions. There is every chance that John will die - and if he does it is Sansa who will need to pick up the reigns without a pause. Arya, step back, this is Sansa politicking and it’s what she does


And if she is taking over? Well, her being Queen in the North is not exactly a bad thing


Littlefinger is plotting again and has managed to dredge up the only letter out there from when Sansa was forced to condemn her father as a traitor. This could be to protect her because it’s likely that the northern lords will react… poorly to this. But if he is planning to protect her, why keep it? Why not burn it


Arya spies on him and sees what he’s done. But then Petyr spies on her spying on him and nooooo just stab him already. Clear away this storyline and let us focus more tightly


I suppose we have to drop in on Sam in Kings Landing who have also received a raven from Bran about the dead. Despite Sam’s repeated pleas to listen the Maesters are unwilling to commit. And the Archmaester DOES sound sensible but when he talks about the condition of the ravenry we’re reminded just how isolated and protected they have been from the chaos spreading through the seven kingdoms.


Sam gets frustrated and decides to leave - along with Gilly, baby Sam and a lot of books. I have no idea what he intends to achieve


Tidbit along the way - Tilly mentions a passage in a book where Rhaegar (Daenerys’s brother) annulled his marriage and married another woman. I would lay odds on that being Lyanna Stark - which would definitely make Jon Snow the legitimate child of Rhaegar Targaryen


A few musings on these bloodlines.


Gendrey is the “bastard” son of Robert Baratheon. As far as we know, with Robert, Renly and Stannis and Shireen all dead, the Baratheon line is wiped out. He has a not-terrible claim to the Stormlands and the title. If we’re going to get extra technical, he’s technically heir to the throne as well.