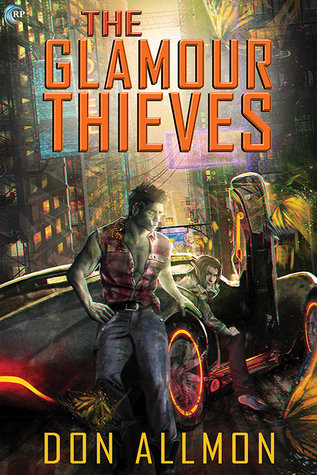 But his past comes back to haunt him - namely in the hands of the very very sexy elf Austin. His ex and definitely bad news. JT should tell him to leave. JT shouldn’t have anything to do with him. JT should definitely not believe anything he says

But the threat against one of his dearly loved old compatriots is not something to ignore… of course the question then is, just how much has Austin lied this time?


Well that was incredibly different - and extremely fun and exciting to read. I need more of this, so much more of this.

Our main characters are Austin and JT, an orc and an elf, two men and two lovers. They’re joined by Buzz, a human, a man and another leg to their love triangle

And normally I’d cringe because there’s no quicker me to make me run for the hills than a love triangle - but this really works. It isn’t a matter of jealousy (though jealousy is certainly there), so much as different men bringing different things to the relationship. I love that their relationships are complicated and layered, with JT seeing different qualities in Buzz and Austin and valuing both for different reasons. There’s no real spectre of a happily ever after and the conflicts are very reasonable based on the very complicated histories between these characters which casts wide shadows on them.

Their relationships are very real, not overtly romanticised, often very gritty, with very real emotional conflict between the characters. I can really feel the history of these characters, what has past between them and how that makes their current relationships really fraught and difficult. At the same time, despite being an important element of the story, the romance does not completely overwhelm the plot by having confusing romance elements in life-or-death situations, etc.

It’s also blessedly free of the usual tropes and stereotypes we see about gay men and gay relationships - so many tropes that are almost mandatory in any story with men in relationships with each other. One of the more intriguing elements is that JT, the huge huge huge massive, super-huge orc is a bottom while Austin, the elf, is a top. Yes, it’s a simple thing but in a genre where fake gender roles are often imposed on characters in a same-sex relationship, it stands out. Equally the fact that Austin is definitely a more physically dangerous character is noteworthy. These characters are really awesomely deep, nuanced, relationships with each other with no tropy subtexts and no rigid romance paths. And they have some really good hot sex which, yes, I actually find hot (I have very very very very rarely actually found many written sex scenes remotely appealing) while at the same time being appropriate to the plot.

Frankly, if this were the only good thing about this book, I’d honestly still love it because I loved this so very very much. But there’s also so much more

This world is awesome - we have a really excellent Shadowrun/cyberpunk world going on here which I love. We have a world with traditionally fantasy world characters - wizards, orcs, elves in a technological setting - but an almost futuristic technology with cyberspace and networks in everything from minor networks for cars and huge, sweeping networks that can cover entire cities with grafitti’d, crowd sourced hacking. This creates almost a parallel realm that has to be acknowledged and taken into account in most encounters. To use an RPG parallel, your party needs a hacker as much as it needs a wizard or a warrior.

This creates a lot of levels of complexity, especially since orcs and elves are apparent recent additions to society, there’s lots of hints at dystopia and a dystopian event and there’s also an interesting take on the idea of magic and technology not mixing. This is a very old trope and one of those genre rules that has been so long that you do kind of wonder why it has become such a mandatory thing (like werewolves and vampires hating each other). What is intriguing in this case is we have a sci-fi, hyper technological society with those parallel cybernet realms means that a character who has and uses magic is effectively cut off from this. We see JT bonding with his car with his mind, turning his drones into extension of his own consciousness which was really excellently done (and an awesome part of the world) and through the power of this awesome description we realise that Austin, a character with magic, is expressly excluded from this world. This isn’t like, say, Harry Dresden being annoyed because he can’t use a computer or his car is unreliable; there are huge parts of this world that a magic user is expressly denying themselves for the sake of magic. At the same time, when we see the choice Roane made to get technological implants, we also see the implications, even the horror, of this elf expressly turning her back on her innate magic to gain access to this technological world.

All of this complexity and layers and elves and druid and orcs and hints of past events is all really wonderfully portrayed in subtle moments of world building woven excellently within the main plot line. There are no infodumps or convolued offloading of knowledge. Unfortunately. Unfortunately because I NEED MORE. I love this world - love it love it love it. I love the idea of a syndicate with hackers and cybernetic helicopters AND a Necromancer made of ofuda. More world building! More! I need more, I need it!

And all of this is presented with some really awesome writing. The action is exciting as they flee the attention of a major criminal gang. The description of JT’s technological merging is really intriguing and powerful. The relationships are really powerful, emotional and layered. The history and flashbacks are emotional and meaningful. And the book managed to describe cars in a way that made me interested and I don't give a damn about cars. And, yes, the sex is hot. This was a really excellent book

What is sadly missing is gender and racial representation. We have a few women and POC among the bad guys and side characters and we have a very briefly appearing female orc who is JT’s apprentice. Roane, Austin’s sister, is described as a Black woman but she is constantly mentioned and thought of rather than actually being present. Most of the characters here are White or racially non-applicable due to species (i.e. they’re green). It’s a shame because so much about this book is perfect that it’s painful to admit this glaring flaw.

I want this book to be a 200 book series I can just read forever. Make this more.