Game of Thrones, Season 7, Episode 4: The Spoils of War

Well, that happened: the inevitable awesome burning action happened and we knew it was coming but it was still very awesome


Three of the Stark sibling have now been reunited - Bran, Sansa and Arya. And I think this whole episode really powerfully shows us how much the siblings have changed. Bran has become almost robotic - completely emotionless even as Meera, a woman who has fought desperately to keep him alive, has carried him literally, watched Hodor die for him, watched her brother die for him, says goodbye. He shows no emotion even as she is devastated by this.


When he sees Arya and Sansa he is equally dispassionate with added levels of creepy and spooky. Sansa has heard about his visions and clearly didn’t believe them - until his talking about Arya’s list and journey makes it clear he isn’t just seeing things.


Another person taken aback by Bran’s spookiness is Littlefinger who tries to schmooze Bran with pretty words and the shiny knife that started this whole chaos - the knife that near murdered him, a murder and a knife which cause Catelyn Stark to imprison Tyrion and start the whole war going in an utter disaster


Bran is indifferent (he gives the knife to Arya) but he does mention “Chaos is a ladder” which is pretty much Petyr’s watchword. This freaks Petyr out severely (the Stark kids are rattling him good) while also suggesting that, yes, Littlefinger was the one behind all of this.


We’ve seen Sansa mature and become the incredibly strong, cunning woman she is today and now realising her young siblings have grown in the same time period. Especially poignant is her and Arya reflecting on their mutual difficult, painful stories- but Arya’s determined “this isn’t the end of their story” and it is beautiful to see Arya actually hope now.


Sansa originally laughs over Arya’s list only to have Bran’s visions confirm it - and then see Arya match Brienne (who towers over her) in a sparring match.


And I feel for Brienne - seeing the Stark children reunited as she promised Catelyn she would while acknowledging she did pretty much nothing to make it happen. The Starks are doing it for themselves.

To Dragonstone where Daenerys and Jon Snow are beginning to show more chemistry before their inevitable marriage (and Davos definitely noticing) and Jon showing Daenerys the shiny cave of dragonglass he found complete with cave paintings from the Children of the Forest showing their alliance with the First Men to face off against the super creepy white Walkers.


This is his not so subtle message that they should stand together and Daenerys throws back that she’ll support him if he bends the knee. Yup, she’s broken record. He points out that his people will rebel. She says nope, he’s their king, he doesn’t say “lady, you have not met Lyanna Mormont” but he really should have. 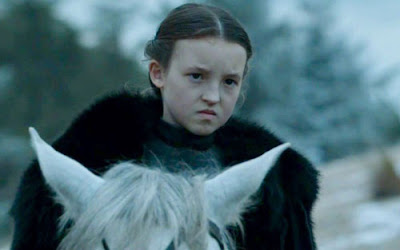 He does speak to Missendei who tells some of her history for some nice characterisation but is really much much more about how totally awesome Daenerys is. And, y’know, it’s nice to confirm that everyone who follows Daenerys does it because they respect and love her and what she’s done and absolutely none of them give a shit about who her daddy was or what noble lineage she has. Which is good because it removes her entitlement to rule just because of her noble name which is a hard sell and full of (very historical accurate) entitlement


The bad side is basically the fact she’s selling herself as the Greatest of White Saviours. The whole Mhysa storyline was a hot hot mess and this being her selling point is just cringeworthy
Also no mention of dragons. I mean “we love her. Also she has burny lizards that kill people. And a legion of angry horsewarriors who think she’s a fire goddess and kill people. Oh and an army of people who’ve been slaves since birth and may not even know they’re free because did anyone actually check? Seriously most of the time Daenerys doesn’t even speak in a language most of them don’t understand, shouldn’t we do a survey or something?”


Anyway, Daenerys hears bad news after bad news where all of Tyrion’s great plans have run into Cersei’s impossible tactics and plot-convenience which has robbed Daenerys of all her allies and is pretty annoying
She still has the biggest army and the big burny dragons though. But there’s still that pesky morality about burning entire cities full of all those innocent extras. Jon is quick to point this out - that she’s such an inspirational good person and could really have the chance to convince everyone that they’ve got a ruler who actually gives a shit.


She needs a moral target.


Over to Jamie Lannister who looks most mopey as is pretty much his constant expression nowadays since his entire family is dead or an enemy or evil or some combination of the above (usually all three).


He has managed to get lots of gold to pay off his sister’s huge debts (and to hire more soldiers) though Bronn still wants a castle. HighGarden. He doesn’t want much. We also see more of Sam’s younger brother (and a nice touch - despite being from a wealthy, important house and from the usually colourful Martels, the martial Tarley family has very plain armour - closer to Bronn’s than Jamie’s).
And then Bronn hears approaching hooves. Daenerys has found a nice “moral” target of lots and lots of soldiers (largely drafted peasantry but hey not civilians TECHNICALLY)


It’s interesting to see the Lannister forces actually have a very roman-style infantry mixed with nice solid spear blocks. But despite the extremely well disciplined infantry, Bronn thinks it’s time Jaime runs before the Dorthraki overwhelm them. Remember back in season 1 when Khal Drogo’s Khalasar was considered so scary that it alone could sweep away all the armies of Westeros if they didn’t cower in castles? Horse archers are really good at destroying medieval European armies - ask the Mongols (though it has to be said the Dorthraki seem to do a lot more choppy choppy than shooting).


The whole fight is super awesome, really dramatic, utterly terrifying and this shows just how incredibly terrifying the dragons are - these are weapons of mass destruction.


Bronn runs around relying on a whole lot of plot armour to allow him to get to the hidden Scorpion ballista which he uses to shoot at Daenerys’s shiny dragon. He hits - causes the dragon to land but it looks like a shoulder injury; I doubt we’re looking at a dead dragon (and she has 2 more so, yeah, not a win either). Which also gets the Scorpion well and truly destroyed (Bronn’s plot armour is going strong)


Tyrion looks on and says “flee you idiot”. Poor Tyrion that’s a painful thing to watch


Bronn appears from nowhere, again, to drag Jamie into a river.


Seriously this dragon has been nuking swaths of carnage all around but narrows it’s flame to kitchen blowtorch whenever Bronn is around.


In theory this could be Bronn and Jaime dying but nah. Firstly, contrary to popular opinion, medieval armour ain’t that heavy (though I admit not easy to swim in) secondly, if Jamie and Bronn were going to dramatically die in a battle against a dragon it would not involve DROWNING, c’mon.