The Homophobia of The Mist 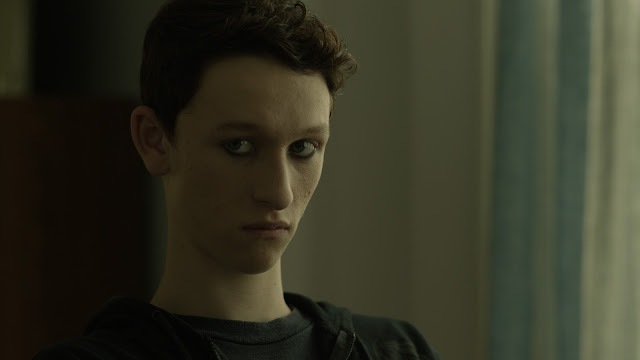 The Mist is based on a novella by the same name by Stephen King. Given that the source material was originally published in 1980, to be relevant to today, it most certainly had to be updated.  Erasure is not something new to this genre and therefore the lack of LGBT characters in the novella while not surprising is certainly common.  As part of updating this series, the writers behind the Stars version decided to include LGBT characters.

The desire to make a series inclusive which was once erased is good; however, good intentions don’t necessarily lead to good representation. This is especially true when it comes to Adrian and Tyler.  It’s perhaps even more problematic that both Adrian and Tyler are teenagers, given that this is a time when youth are actively looking for characters they can identify with.  There is little enough LGBT representation on television for young people to identify with and therefore offering them not one but two characters that both leave so much to be desired is actually harmful.

When we first meet Adrian, he is sitting down for dinner with his father. Mr. Garff clearly disapproves of his sons sexuality and the fact that Adrian wears makeup.  Adrian tries to address his father, only to be met by silence. It’s Mrs. Garff who reminds Adrian that his father cannot hear him while he is wearing makeup. The viewer is meant to recognize Mr.Garff as the homophobe he clearly is, while seeing Mrs. Garff as the so-called good parent. The problem with this is that by not calling out Mr.Garff on his treatment of Adrian, she is equally guilty in the oppression of their child. Silence in the face of bigotry, no matter who is doing it, is not benign. More, Mrs. Garff’s wording focuses the fault on Adrian: she not only doesn’t challenge her husband, but openly accepts his narrative. Her husband isn’t ignoring their son, he “can’t hear you while you’re wearing make up” - she pretends sympathy but the fault is still her son’s.

Surely, there are parents out there who are just like the Garffs, who are actively doing harm to their children - but in itself this is why this unchallenged, unexplored scene is so damaging: there are a whole lot of Mrs. Garffs out there who think they are “the good parent” and that sorely needs to be challenged.

Clearly there’s a problematic juxtaposition when it comes to the Garffs; however, Adrian’s parents actually represent the least toxic version of homophobia that The Mist engages in.

After a less than pleasant supper, Adrian heads off to the football game to indulge in his male privilege to gawk at the football players. Yes, please do read that sentence again. What the ever loving fuck?  It’s only the first episode and it’s already clear that the writers have no idea what the hell they are talking about. You cannot just throw buzz words around with no rhyme or reason.  Adrian has male privilege because he’s male and it has absolutely nothing to do with his sexuality. In fact, just being a bisexual male in a situation like a football game (a sport known for its toxic hypermasculinity) could actually prove dangerous for Adrian.

This is not only logically ridiculous, but the show itself openly acknowledges homophobia (pretty much being the sum total of Adrian’s storyline) - it is mind boggling for the writers to decide Adrian is in the privileged position to drool over football players, while in the very same episode he’s attacked by one of those same football players.

Homophobic violence pretty much defines Adrian’s storyline, from being homophobically attacked at a party, to being violently assaulted by Tyler in the hospital. Follow this up with what can only be described as an attempt at a touching bonding moment with Tyler describing yet another violent attack on a perceived gay or bisexual man. We’re only only on the 7th episode and Adrian is far from a major or focused character but we’ve thrown in four examples of homophobic violence. Change the damn record.

Worse, the themes around these incidents is further toxic - most glaringly that Tyler himself is a gay or bisexual man. Look, internalised homophobia exists, it would be impossible not to in a society that still continually denigrates and abuses LGBTQ people; self-hatred and externalising that is a problem. But this meme that homophobia is caused and primarily perpetuated by LGBTQ people ourselves has to die yesterday. All homophobia comes from cis, straight people - even when it’s perpetrated by the self-loathing LGBTQ people themselves. And even that is by far the exception - the vast majority of hate crimes against LGBTQ people, discrimination against LGBTQ people and oppression of LGBTQ people is entirely at the direct hands of cis, straight people. This tired trope that that violent bigot is secretly gay themselves is never an attempt to analyse the damage society causes LGBTQ people, especially LGBTQ youth, but as a way to shift the blame from straight people. Enough, homophobia is not an LGBTQ on LGBTQ crime, no matter how many times cis, straight people love to sell this narrative.

This comes packaged with another terrible message - endurance and forgiveness. Adrian is beaten bloody by a violent homophobe and seconds later is willing to make out, maybe have sex with him and suddenly they’re all friends? In case the message didn’t sink in, Tyler recites a story of abuse and his “respect” for the victim who didn’t report him for breaking his freaking arm.

I could do without the “respect” of violent homophobes who will break my limbs if I look at them wrong. We could all do without the message that LGBTQ kids need to silently endure abuse to try and earn the respect of their abusers. Is this show trying to hit bingo with toxic messages?

Nit-picky readers may be ready to leap in to point out that I said “four” examples of homophobic violence. The last happens in the church at the hands of Father Romanov preying on Adrian’s apparent vulnerabilities over being sinful and having him say he’s a sinner, repeatedly. Yes, some of this is a con on Adrian’s part to steal his keys - but Adrian sought comfort from father Romanov and his wariness of the homophobic idea of sin long before . And even as a con, there is no indication that this cost Adrian anything or hurt him - nor any real condemnation of the evil Romanov is committing here.

Yes, I’ve called it evil and yes I’ve called it violence. This isn’t hyperbole. LGBTQ people, especially LGBTQ youth, are extremely vulnerable to religious homophobia and the utterly destructive messages it sends. Suicide among LGBTQ youth is devastatingly high - and even higher from homophobic religious backgrounds and when religious “counselling” is sought. What Father Romanov did kills far more LGBTQ people than what Tyler did.

Next to this, having Adrian singled out as being the evil one by a mentally ill serial killer (for added ableism as well) just cannot sit well.

In the face of all this, it’s also clear Adrian has no real support - not only are his parent’s homophobic, Adrian’s best friend Alex is pretty indifferent. In the brief time we’ve seen them together, we’ve seen Adrian, in classic, stereotypical Gay Best Friend fashion be there to support her, both in times of real crisis through to being her wingman at a party he really didn’t want to attend. But when he’s homophobically attacked at that same party, does Alex actually spare a second for him? No she leaves him to go with Jay. Stop and analyse that scene - Adrian is attacked, physically threatened and pushed by a man using inexcusable slurs and the people we’re supposed to see as his saviours in this situation then leave him alone. This is not friendship, this is not allydom and this, along with the pathetic failure of Adrian’s mother just reinforces something every bit as damaging as violent homophobia: how little straight people step up and still get to be considered the good ones.

At it’s core, the main problem with this portrayal in The Mist is callous laziness. We said that the desire to make an erased series inclusive is good - and it is. But there is a huge difference between having a desire to make a series inclusive, and lazily ticking a box to try and get some progressive points or get a marketing token to schill to some publications. At no point has there been any effort to include an actual LGBTQ character - even without the obsessive focus on homophobic violence, Adrian is a problem because he’s hollow. His every storyline, his every presence, his every conflict revolves around him being bisexual. Name anything about Adrian that DOESN’T relate to him being bisexual - he’s the epitome of a Bisexual Shark. I actually think the most defining element of Adrian’s character isn’t his friendship with Alex, him being beaten up or his kiss in a hospital bathroom - but his inane comments about privilege at the football game. A character who matters very little and the writers have invested so little time in that almost his opening lines are a world salad of nonsense.

Adrian is an LGBTQ character created by people who know very little about LGBTQ people, LGBTQ issues or the importance of LGBTQ representation - and who care even less.


Edit to add: Wow we wrote this and the very next episode took this trainwreck and made it 10 times worse. This is appalling. This is inexcusable