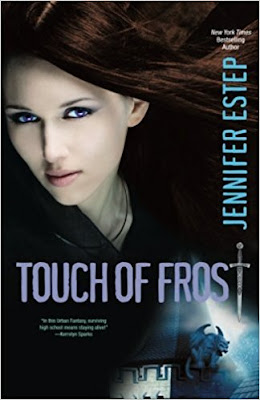 When Gwen’s mother died she was claimed by the Mythos Academy. An Academy that teaches young, magically gifted warriors to be ready to fight Chaos as has been their solemn duty for centuries


But Gwen, with her powers of psychometry and no magical history or culture felt very out of place among the affluent, strong and powerful valkyries and spartans of the Mythos Academy


And never did this rift loom so large than when one of their class is killed and her war torn peers seem to not even care. It’s left to her to investigate and find the actual truth

I can’t even begin to review this book without addressing the great big elephant in the room and the problem is it underpins a lot of the whole book.


A core concept of this book is that the magical kids in this school are have magical gifts based on the mythological, legendary warriors of the past. This works for the valkyries with their super strength. And the Amazons with their super speed. But then we have the Romans, Celts and Spartans… these are actual people? Also I question why your legendary super-warriors for men are actual historical people. While your magical warrior women are mythological? I don’t think it’s intentional and there’s no actual sense that there’s a magical divide between men and women: but I think it kind of sends a weird message that awesome warrior women are… well… fictional… while awesome warrior men are historical.


But then there’s Gwen. Gwen’s magical gift is psychometry - she can touch things and get sensation and images off it. Her mother and grandmother also had psychic gifts like this. And they are called Gypsies.


Argh, no. First of all that word is not neutral, it’s a slur used to denigrate, demean, insult and perpetuate no small number of myths against the Romani people. And Romani are not legendary, mythological or even historical people - they’re an ethnic group, a highly discriminated against ethnicity that faces incredible amounts of persecution as well as really damaging stereotypes. One of which is this pervasive fortune teller/woo-woo depiction - this is damaging


But to top this off, I honestly think the author may not know this. And by “this” I mean that Romani actually exist. There is no suggestion, not one tiny suggestion, that Gwen, her mother or grandmother are Romani. There’s no suggestion that them calling themselves “Gypsy” applies to anything BUT their woo-woo. There’s even a line:


“I didn’t know exactly what made us Gypsies. We didn’t act like any Gypsies I’d ever read about. We didn’t live in wagons or wander from town to town or cheat people out of their money.”


I… no… just no. Really, appropriating a slur and then trotting out of all of these insults and stereotypes while completely ignoring actual Romani people is beyond not ok.


Getting past this is difficult, but when you do there is a somewhat intriguing story and world here. Though I would like more development of this world. We have the concept of the pantheon and the big bad god spreading chaos which isn’t exactly original. Which is why I would have quite liked to have examined what all these gods - or what all the individual powers were and meant.


There were some excellent moments of examining the idea of these very spoilt, privileged kids who, at the same time, were so innured to loss and conflict, which in turn expanded on the idea of why they are being so very spoiled; indulgent parents who are very aware their kids may not reach adulthood.


And while the meta plot isn’t especially original - magical warrior kids fight evil servants of an evil god - the actual plot line of the book was interesting with a few twists. What didn’t work to me is it kind of showed its hand too early - we had massive hints - repeated hints - as to the real culprit and what had really happened that I kind of knew the answer far too early in the book


I also didn’t particularly connect to Gwen even beyond the appalling description of her powers. She’s not necessarily a bad character so much as she is a typical character. Dead mother. Social outcast. The only poor girl (but not TOO poor, probably better to say she’s simply not super rich) in the rich people school. I mean, it’s a bit Female YA protagonist 101. She’s not a bad character (beyond the Gypsy thing) but she is a painfully typical one. And between this, the broader world setting it feels too routine.


I’m more interested in the friends around Gwen (not her love interest. He’s classic characterless hot guy whose dark secrets are used as a code for not having to develop him) - but Daphne: the Queen Bee Valkyrie, tech geek, realising the hollowness of popular girl clique she was in. I liked her.


What I didn’t like was the pretty grossslut shaming of one of the dedicated enemies because she’s having sex. Note especially that Logan, Dedicated Mysterious Love Interest also has a reputation for sleeping with anyone who will have him and he’s not considered shameful or attacked over and over again for his sexual nature. Honestly I’m not a mad fan of the whole evil mean girl clique trope in general as it usually seems like a way of dragging down skillful.


We do have several POC - the head of the security and physical training is Black; though he doesn’t play a huge role. Daphne, Gwen’s growing friend, is latina and some of the other characters are POC. I also think Metis, a clear mentor character is a woman of colour. These characters have a good chance of becoming more integral as the series develops and Daphne is probably the most prominent character after Gwen


There are no LGBTQ characters


I do think this has an interesting concept; I like Daphne and I like Gwen’s growth. The action is well written and the plot largely good: if a little on-the-nose. I’d like to see how it goes but it has issues with characterisation and simplicity I think; the book needs to trust the reader a little more without bludgeoning them with the plot foreshadowing.