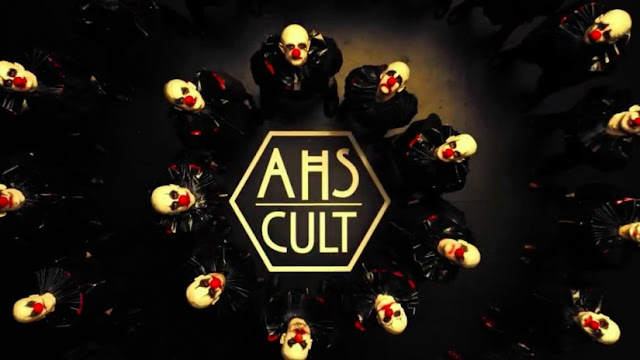 Well… that was painful. No, this first episode was painful. It’s like someone decided to take on political satire without the satire or… well, the wit… and decided to throw in some caricatures and some clowns.


So, we get to relive the last thing any reasonable person wants to relive: the last American election.


Our main characters are a couple - Ally and Ivy and their son Oz. Ally completely collapses with the news and their friends the Changs are similarly hit (with a good rant about not voting and what it costs. This also joins completely unsubtle - onpoint but unsubtle - rant about Ally voting for Jill Stein rather than Clinton because of ideological purity).


Son Oz likes his comics about murderous clowns which is a really not subtle flashback to Freak Show, but American Horror Story loves doing that. This sends Ally into a panic attack. She visits her therapist to explain her coulrophobia, her claustrophobia, her trypophobia, her extreme anxiety and how the election result has basically caused her mental health to collapse. This happened after 9/11 as well but she fought and endured (“white knuckling it”) for Ivy to make their relationship work until Obama was elected and all was bright and sunny again


As her therapist points out, being upset by politics is understandable but her reactions are extreme advises her to centre herself, unplug from the world and distract herself. And take some medication


Except when she goes to the empty supermarket complete with Trump supporting cashier she sees clowns clowns clowns everywhere, some with knives, some having sex over the salad and some in the back seat of her car. She doesn’t handle it well.


Ivy is supportive and helpful but grows more impatient as the weeks pass as Ally’s problems affect their son and the restaurant business they run together. Ally promises to get it together which means they need a new nanny.


So to the next characters: Kai and his sister Winter. Kai is the worst personified who imitates Trump by rubbing his face in cheetoe dust and is celebrating Trump’s win. He not only celebrates but invites himself to a city council meeting where he speaks against providing protection for a local Jewish centre because he wants lots of violence and chaos so everyone can be properly scared and then he and his fellows can rule the scared sheep. He also racistly provokes some latino men so he can film their retaliation as clear ammunition for a race war.


His sister seems to be a highly vulnerable and very manipulated young woman who is heavily under Kai’s control. Their relationship is nauseating and he pushes her into becoming Ally and Ivy’s new nanny.


While Ally and Ivy have a romantic dinner (which goes terribly wrong due to more clown moments) Winter asks Oz some really homophobic questions about his two mothers (and the show doesn’t really do a good job of showing they are homophobic) and shows young Oz lots of internet murders and he spies an ice cream truck full of killer clowns killing their neighbours, the Changs.


When Ally and Ivy arrive Oz tells them about the killer clowns much to Ally’s horror - but Winter rather sensibly points to the murder comics he’s been reading and the police detective says it was a murder suicide. Clearly Oz has had a nightmare and saw blood and probably not helped by Ally


She hallucinates some more clowns. yay.


I don’t think there is or is going to be any kind of use of Ally to explore mental illness even slightly. No, she’s there to be a caricature of fragility (I think she’s supposed to be an avatar of what the hard right thinks liberals are?), a burden on her family and generally an incredibly annoying character. And my gods it takes a lot for Sarah Poulson to lose me.


And I am lost… I mean Kai and Winter are apparently targetting Ally and Ivy on some level and I just… don’t even care why. This is the pilot and I’m completely lost. Not as in confused. But utterly utterly disinterested. For extra points we already have murdered the only POC so there’s another forboding start, along with Kai pushing for a clear race conflict so this is going to be beyond a hot mess.