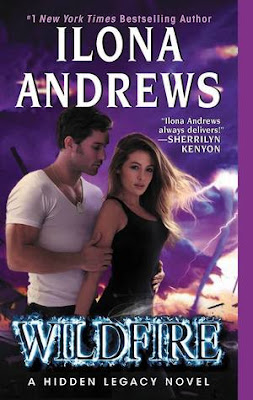 Nevada’s grandmother is in town, desperate to save her house from extinction, she is determined to “recruit” Nevada and her sisters


To remain free there seems to be one choice - to become a House. But is Nevada really ready to throw her family into the brutal world of house politics? And what about Rogan? While she loves him, what politically, will it mean to be with him - and where a House’s power is all about the magical legacy they maintain, will she be weakening both houses by choosing a non-ideal genetic match?


But even if she tries to avoid House politics, she is still being dragged into it: the conspiracy continues, a powerful, shadowy organisation is determined to cause chaos and remove what few restrictions the Magical Houses labour under and Nevada is definitely a target

I love this series. I love this book. I love these characters. I love this world. And, of course, as everyone already knows, I love love love love love Ilona Andrews. They are always one of my favourite authors and every new book in every series always ensures I will retreat from the world, clutch my tablet and promise horrible torturous death on anyone who presumes to interrupt me.


They were warned. They had it coming.


While I love every book Ilona Andrews have ever passed briefly, what I don’t like doing is reviewing their books. Because they’re awesome


And awesome is really really hard to write an intriguing review about. Because then all you do is just splurt praise. And it’s accurate because this book is worth all the praise - and more - but a review which is one long worship-fest both lacks fascinating elements and sort of makes it look like I’m on the payroll or possibly joined a cult who predicts the end of the world will come when the Kate Daniels series ends.


And even worse is writing a review about the awesome third book in an awesome series. Because not only do you have to write a review full of slightly disturbing gushing praise but you have to write three disturbingly similar reviews of increasingly disturbing gushing praise which gets steadily more uncomfortable and ends up with you being unable to say “Ilona Andrews” without adding “praise their holy name” afterwards


Which can be embarrassing


It doesn’t help that each book in this series is awesome for the same reasons the past one was. That isn’t a criticism - that’s because the first book sets the bar high and the subsequent books just keep hitting that bar.


As you’d expect, the world building of the primes and their magic continues to be fascinating but it’s not just how their various powers work (which is imaginative and fascinating and contains lots of interesting details like the detachment of the animal mages or the financial benefit of a fungus-mage) -  but the politics as well; the houses struggling against each other, the ploys, the rules, the importance of family all portrayed with a really well written theme of dehumanisation as we see how really horrifying this endless conflict is to the actual people involved


I even like the romance. I like that Nevada maintains clear boundaries with herself and Rogan. I like that even though he pulls many classic alpha male rawr moments (jealousy, over-protectiveness, highhandedness) she is always there to say “nope this isn’t happening” and he usually accepts these boundaries she draws. There’s even a clearly conniving ex and I thought this was going to be a super hot mess as Nevada protected her “territory” but, again, it was handled surprisingly well. I was even impressed by the nuanced in Nevada’s evil grandmother turning up and having some actual complexity and levels beyond just being a terrible threat


All of this comes with a thrilling, exciting, fascinating story that nearly made me late for work several times because I could not put this book down.


In addition to several excellent female characters with Nevada, her sisters, her mother, her grandmother, her hero and several of Rogan’s military staff (yes, lots of female military here). We have a large number of POC among Rogan’s staff and the attorney general, the aforementioned hero is a Black woman. Several of the houses are POC and every group has some racial diversity. I don’t think any of them are particularly main characters though. There are, sadly, still no LGBTQ people


Ok, vague criticism? I want some motivation for the big evil conspiracy of evil people who want to take over everything and are willing to destroy half the world to do it. Because the Houses, especially these big powerful Houses, already have immense power. They can indulge in their murderous feuds with little oversight, they have more money than they can possibly spend, have literally god like power… so what more do they want? I actually appreciate Victoria Tremaine for having a concrete reason to need to be free of the strictures of House politics… but like, the guy who is basically a serial killer


I also think more world building needs to go into these various murderous houses and those houses that don’t have murderous powers. Perhaps because Nevada has always been front and centre of a near war, it just feels slightly odd that, in a society where the Houses ignore the law so long as it’s “house business” and there are only a few rules to prevent the Houses outright murdering each other, then how does a House of powerful non-combat mages even exist? Why do they not become vassals almost instantly to the first house able to destroy entire cities with their power? I’m not saying it can’t work, but I am saying I think I need to see more of the non-violent elements of House politics for it to work.


I love this book and this series - I expected nothing less. And I cannot wait to struggle to review book 4 as well.