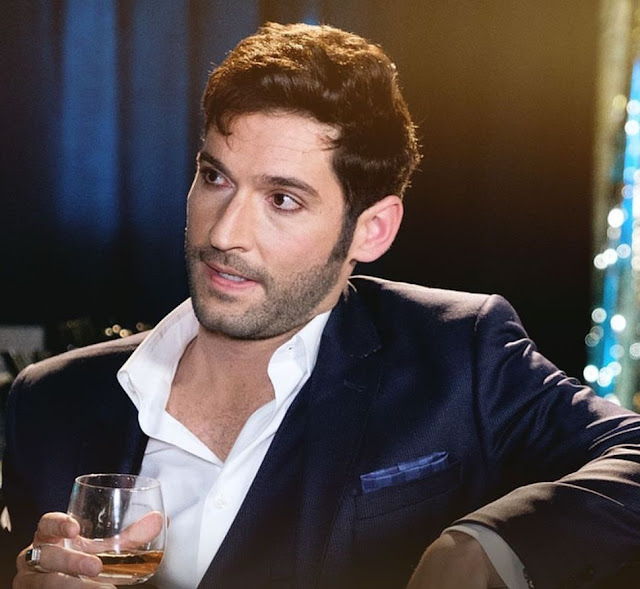 The whole concept of Lucifer has always been good: the devil living it up in LA, making deals is fun. But therapy - actual useful therapy rather than the hot mess it became? Therapy to deal with his issues, throwing in Maze and Amenadiel’s own sessions and Linda bouncing awesomely between them? It worked. Charlotte and Linda’s world shattering revelations worked (how many urban fantasy shows us the existence of gods and angels and the supposedly ignorant human is so blase over something that should rock their world to the core?). It has so much immense potential

Throw in Tom Ellis. Because he is PERFECT in this role. Honestly perfect. His Lucifer is A class combination of sinister menace and grade A charm with a hefty layer of sexy to finish it off. In fact all the characters, when allowed to be, are excellent: Amenadiel, Maze, Chloe, Linda, Ella, Charlotte, even Dan. When given the chance all completely ruled their roles. They just needed more of a chance.

The problem I have with Lucifer is that I’m sad about it leaving because of what it could have been rather than what it actually was. I can’t say I look forward to this show, certainly not in the later season. There’s so much I really really wanted from Lucifer, so much that Lucifer could have actually been. But instead we just got episode after episode of the same annoying pattern: Lucifer would make some random decision, usually due to his daddy issues. He then obsesses over this particular facet to the point of utter irrationality while the rest of the characters manage to limp the plot along. It reminds me a lot of the worst iZombie episodes when Liv gains some weird brain tropes and annoys everyone while everyone else gets on with things

It doesn’t mean good stuff doesn’t happen on Lucifer but it tends to happen around him - Lucifer is actually getting in the way of the actual plot line of this series. Interesting stuff happens despite him, or around him: he is an obstacle to the interesting stuff. And he’s the protagonist. Your protagonist cannot be the least interesting person there; but Charlotte, Maze, Linda and Amenadiel all have more interesting conflicts and development and more meaningful storylines.

On top of that we seemed to get far and far less of the supernatural element. In season 1 Lucifer was a terrifying even sinister force. His deals were near supernatural, his charisma magnetic ensuring a following everywhere, he could throw people through walls, his desire power unearthed all secrets: he was the devil and he oozed the power of that. By the last season he occasionally pulls out his desire power - which backfires most of the time - and that’s it. The whole supernatural oomph of him is completely missing; same with the depowered, wingless Amenadiel.

It becomes only more bitter when we have the season finale teasing us with everything it could have been and will now never be. We needed more of this. So much more: more Lucifer, more Linda and Maze, more Amenadiel with his wings, more Lucifer showing his satanic might, more Chloe into the secret, even more Dan being something other than the one note comic relief he became.

I've said it before but I'll say it again - I hate the whole depiction of criminal defence as evil or corrupt. Criminal defence is vital for our justice system, an already flawed system that hurts minorities especially. Police shows on TV repeatedly demonise defence lawyers while lauding law enforcement for ignoring the rules: those rules that protect innocent people, those rules we need in a world where the police don't always flawlessly find the guilty party. This demonisation has real world consequences as we continually view legal defence as an impediment to justice, rather than its last stand

On the face of it Lucifer has pretty good diversity. Chloe, Charlotte, Ella, Linda and Maze are all excellent female characters - all very different, all strong in their own way and they all get on well: in fact they make a great team together. Linda, Maze, Chloe as friends together is great fun. Ella and Dan are latino, Maze a woman of colour and Amenadiel a Black man giving us a decently high percentage of POC among the main cast: without the tropes that normally drag a lot of minority characters down (and I like that god’s favoured son is a Black angel)

My main issue with these is the space Lucifer gave them. Because the show did give them characterisations, conflicts, their own storylines, histories and relationships - even Ella and Dan which were moreside characters. But they didn’t get the space to explore them - too much time was eaten by Lucifer’s shenanigans of the week nonsense. In some ways it made these characters more important because they became more interesting: but because Lucifer’s latest nonsense usually focused on Chloe and very little else we didn’t get them on screen in as much depth and involvement as I’d have liked

There’s also an issue with both Maze’s and Lucifer’s bisexuality. Normally I’d be swinging from the rooftops over an LGBTQ protagonist - but it’s so terribly downplayed; rendered as invisible as much as possible in a blink and you miss it portrayal. This is especially galling because, unlike other shows that played this game (Sanctuary, Witches of East End, Librarians), sex is such an overwhelming part of these characters lives. Maze has a lot of sex, especially when acting out against Chloe she invites a whole (male) biker gang. Lucifer constantly has casual sex, we see an endless string of women in his bed (often in multiples), we see an endless amount of flirting. Both of these characters unashamedly embrace their sex lives with wild and joyous abandon, leaving ecstatic partners in their wake. But we don’t see their same-sex partners. The idea they even have same-sex partners is theoretical at best. It’s annoying to see bisexual Cassandra on Librarians not really have any romance with women - but she doesn’t have a whole lot with men either. Seeing Lucifer notch the bedpost so many times its virtually kindling and ALL of them be women is far more glaring

More. So much more. More supernatural, more of these storylines. More overt bisexual representation

But I particularly wanted more supernatural development - we saw Uriel, I would have loved to see more of his other siblings. Where are the other archangels? The other angels? More demons. The more season 3 was demagiced the more I wanted to see more of it - more divine, more infernal powers. More woo-woo. I wanted to see how Amenadiel and Lucifer reacted to their other siblings, how they reacted with Linda and Charlotte… and Chloe (with her centrally involved). Even Ella with her overt religiosity. So much of this show was so well done that “more” is really the best thing I can say: More characters, more plot, more supernatural, less shenanigans.