One Foot in the Grave, by Jeaniene Frost. Book 2 of the Night Huntress Series 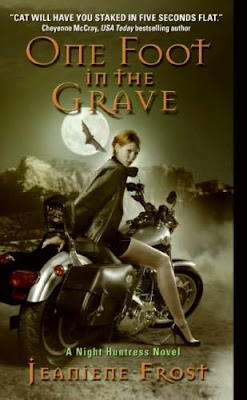 Cat is back. Now at the head of her own government established force to police and hunt down vampires. 4 years have passed since the last book and she's grown to a powerful, confident leader and a lethal warrior.

But 4 years have also passed without Bones who she can't stop thinking about. As is almost inevitable, he finds her. But he's not the only blast from the past that shows up on her doorstep – her old boyfriend is leaking information about her too assassins and her father, the vampire who raped her mother, has finally raised his head on the scene and it doesn't look like a happy reunion.

And one of her targets got away – well she let him get away. And now he's intrigued and curious and wants to add Cat to his collection of toys. He's unwilling to accept no for an answer and is quite happy to target her colleagues and family to make it happen

And through all this she has to reconcile her old love with her new job, convince her vampire hunting work mates to accept Bones or to decide whether she should leave the job or again deny her lover – to say nothing of her mother who still carries a bitter hatred for all the undead.


A lot of this book is devoted to sex. Thinking about sex, wanting sex, having sex – and, perhaps above all – being jealous and possessive. I think the whole Tate loving Cat was a distracting and unnecessary source of tension and drama (as well as very unprofessional) same with Juan's innuendos and the whole drama between Annette and Cat. A lot of the book was devoted to sex scenes (and the 20 minute orgasm that resulted in screams that apparently damaged her vocal chords *eye roll*) already that I felt were a distraction but, ok, after 4 years apart of celibacy and unrequited horniness, err, love I mean love, I can live with it. But throw in the snarking jealousy plots and we had a lot of wasted text, distractions and completely unnecessary interludes into the story. They also seemed to petty and childish I had to double check to see if I hadn't picked up another highschool YA – these characters range in age from 28 to 200+ but completely failed to act it. Basically, I felt I had to plough through both reams of humping AND reams of snarking and bitter fighting to get to the actual plot.

The plot itself was interesting and, I think, something of a development from the first book. Cat is much stronger as a character, you can feel that she's aged and is more her own person with her own agenda and decisions. It also didn't feel as convoluted. The first book going from a gang of vampire people trafficers up to the governor just felt like a very abrupt escalation that came somewhat out of nowhere and there were a few other plot points that were just a bit extreme and not well founded. This book held it together much tighter, the plot was believable and solid and interesting with sufficient twists to stop it being predictable. I won't say it was the best I read, but ater the first book set us up, it was a definitely improvement

I do feel that a lot of difficulties in the plot were resolved relatively easily. Her groups relatively rapid acceptance of Bones was somewhat surprising – not necessarily unrealistic all things considered, but still abrupt and faster than I expected.

Character-wise, I like Cat. She's much stronger, she has some moments of foolishness but I won't say they border on Spunky agency. She a little sex obsessed (explained by the 4 year absence but still) and not as professional as she could be, especially considering she's the leader of the 3 captains. Still, she's assertive and powerful without being contrary, she's fully aware of her own abilities, confident in them and rightly so. I could have done without everyone in her team sexually objectifying her so much, nor do I like her slut-shaming other women for being sexual or criticising the revealing clothes she wears as bait as “slutty” etc.

Tate, Juan and Cooper are all pretty much extras. We have one POC, but Juan and Cooper are side characters at best and Tate is her chief lieutenant. It's annoying that all 3 feel the need to objectify Cat, their superior, in some way – Tate views her as a romantic interest, Juan drops innuendos all the time and Cooper constantly refers to her “freaky” bloodline.

Bones has dropped a fair amount of his Dick Van Spike accent, which is something, though Annette showed up (to be another “slut” and woman to be jealous of for Cat) with her own addition. Naturally Cat and Annette loathe each other because of their mutual interest in Bones (it's depressing that so many female protagonists in this genre have so few close female friends because they're always THE COMPETITION!) Annette added her bisexual leanings – except only and always for the sake of titillating men.

This was a step up from the last book, Halfway to the Grave and, more, after the development of the first book I'm confident that this series is now going somewhere now we have an established base. I've gone from “decent book” to “series that's worth reading” and I'm looking forward to the next instalment. It's not amazing, but it is good – and its getting better