Review: Blood of the Demon, by Diana Rowland Book 2 of the Kara Gillian Series 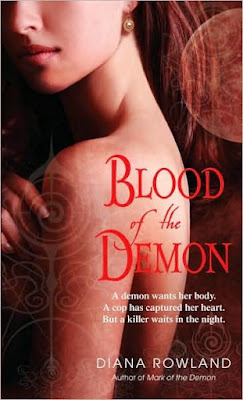 Kara Gillian has a new case - there are more bodies piling up and while they seem to have natural causes (or common murder causes, anyway) there’s something more about the bodies. They’re completely ripped of all their essence, all their life force unnaturally torn away - and its getting worse. She’s again faced with investigating the murders as a police detective, but also using her arcane abilities and somehow passing that under the mortal authorities’ radar.

Worse, she has so few people to turn to, so little sources of information. Her aunt is in a coma and the only one who can tell her what is happening - stop the killer and bring her aunt back - is Lord Rhyzkhal, the sexy and powerful demon lord. Who, in turn, has his own agenda. He wants Kara to be his summoner, to give him a toe-hold in the world. And even a taste of his knowledge gives Kara abilities and knowledge far beyond what she had before.

But even with all these complications it gets harder when other strange demonic creatures push themselves into her reality - and Ryan, her friend, confidant and FBI agent seems to be keeping more secrets than she realised.

To start with something I love about this series - we have more excellent class commentary. While the last book showed us expertly how easily and quickly the poor are neglected and forgotten by law enforcement, here we saw the other side of the coin. The rich expecting kids gloves and gentle treatment. The power of being rich and influential and connected is showed again and again in this book. The power and ease of being a corrupted judge, of looking after one’s own, of protecting your own little clique and circle are repeatedly referenced. At the same time the point is strongly made that the same levels of drug abuse, domestic violence et al all happen in these wealthy subdivisions as in poorer areas, but they’re much better covered up. But, again it is done without lecturing or infodumping.

Kara Gillian is still a fascinating character. She is intelligent, has powerful amounts of common sense. She has a temper but it flares when appropriate and not completely unrealistically and foolishly. She is driven and drives the story, she’s overwhelmed by the sheer amount she has to deal with, but she does deal with it. I don’t think I’ve found many protagonists in this genre who are as human as Kara Gillian. As real - and as lacking in tropes that make me want to throw my e-reader down in disgust. One problem that has creeped in is a continuation of her discomfort over sleeping with Rhyzkhal which is coupled with Ryan’s disgust over her assignation with the demon - and her desperation for his approval. On the one hand I can see why Kara would seek friendship and approval since she has been alone a long time and very few people know about the Arcane - but at the same time her desperation for his approval and his judgment are more than a little skeevy making. Especially when she then decides to get revenge on Ryan’s judgmental attitude - by having sex with Rhyzkhal and feeling bad about it. I also don’t like her condescension and assumption of plastic surgery to most of the attractive women she meets, it’s a little, well, catty and again related to sexual shaming.

To contrast that we have something I’ve hardly ever seen - people referencing a promiscuous woman in neutral tones. Especially in a police drama, the minute a woman, especially a crime victim, is revealed to have sex with lots of different men then you nearly always have people saying “she deserved it” or “she got what’s coming” (or, if you’re reading Aurora Teagarden, everyone doing the “death to the evil hussy!” dance). I actually kept reading waiting for someone to turn round and say something that would make me cringe but they didn’t. The victim had sex with multiple men and while they were relieved that it meant there was a chance that their friend hadn’t killed her, there was no “that terrible hussy, you deserved it” or anything really close to it.

Unfortunately there are problematic elements. Firstly of erasure - there are very few POC and the ones that exist are either very small token parts (a black guard at the courthouse, a Latino law clerk at a funeral) or rather problematic (the undocumented Latina maid with poor English - who seems to love her employer). Both could have been worse but both were far from ideal and this erasure in Louisiana which has a very large POC population. Similarly there are no GBLT characters at all.

Another problematic element we have is related to weight. There is a fat detective and his weight is constantly referred to and linked to his incompetence, his unprofessional nature and his laziness - which are also unfair stereotypes for overweight people. By all means make the detective lazy and unprofessional and incompetent - it works in the plot, it’s realistic and sensible, but there’s no need to link this to his weight. He’d be just as unprofessional, lazy and incompetent if he were skinny - or even if he were overweight but it wasn’t mentioned so many times over, but it is repeatedly referenced.

Plot wise, again I am impressed. It’s so rare to find murder mysteries that are so well paced - how to preserve mystery without navel gazing, how to drop clues without dropping the answer and how to keep things exciting without overwhelming the story with action and reaction (where the investigator seems to be in a survival horror with bodies dropping all around rather than actually investigating anything). I think these books really do strike the balance extremely well. If I had any criticism of the plot it could be in the excessive elements together - we had Rhyzkhal and his plotting, we have aunt Tessa in her coma, we have Ryan and his issues, we have the monsters appearing and we have the actual murder mystery itself. At times I almost lost track, a character would appear and it’d take a second for me to remember exactly who they were. There were times when I was a little lost wondering exactly what plot line we were currently following, but I picked it up quickly and it was never really a barrier, a stumbling block, perhaps, but never a barrier. And it did add to the theme of Kara being overwhelmed and pulled in several directions that is maintained extremely well through the book.

And, of course, the world is fascinating. We’re given more hints, introduced to more demons, explore a little more the concept of essence and potency. But it’s all teased, for every revelation there are 3 more questions. I think I’d pick up the next book just to know more and see this world even if the plot was dull and the characters awful. All in all, despite the problems I am loving this series