Review of Autumn The City by David Moody: Book 2 in the Autumn Series 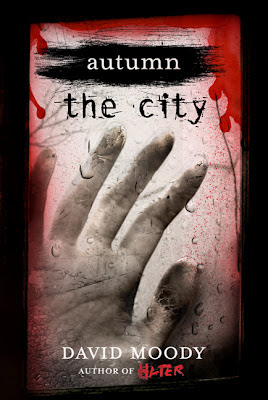 Just as the story suggests, this time Moody takes his Autumn series into a major urban center.  As in Autumn, the first book in the series, 99% of the worlds population is suddenly struck dead through what I assume to be an air born virus.  The survivors must first deal with the grief of knowing that everyone  they know is dead and gone. Most choose to seek comfort in the familiar by staying in their homes, or in their places of business.  Eventually, they are driven out either by a desperation to ascertain that they are not the last humans alive, or because they have become trapped by the newly dead, who have become zombies.
Due to it's location, Autumn The City lends itself to a larger cast, but once again, this does not include  disabled people or GLBT people.  One Asian man is at the shelter, and he does not speak any English. He is referenced once and quickly forgotten.  His pain is told through the lens of a  White survivor named Donna, and this further helps to remove his importance to the story. The absence of  historically marginalized people in a large urban center makes absolutely no sense, and reads as a failure of  imagination, as well as an inability on the part of Moody himself to confront his privilege.  It's a terrible thing when one has the ability to create an entirely new world, and still cannot conceive of a way in which to include historically marginalized people.  As I said in my review of Autumn, this is not unheard of in dystopian fantasy, but that fact does not make it anymore acceptable.
To ensure continuity between the two books, Michael and Emma are placed on the outskirts of the city seeking shelter in a Winnebago.  Due to everything that they have survived together, a sort of dependency, and what I think would best be described as situational love occurs between the two of them.  The one scene I did find disturbing, is when Michael decides to masturbate to the point of ejaculation, while holding Emma as she sleeps.  She of course was only feigning sleeping, and tells him that his feelings are only natural.  Uh huh, to me this sounds like a great way to skirt the issue of consent, as well as justification for using a woman as a masturbatory tool.
I am absolutely blown away by Moody's skill as a writer.  From almost the first sentence, Autumn The City, though short - coming in at under 200 pages, it is almost impossible to put down.  The writing continues to be very stark, and yet we can feel the desperation of the survivors, as their only shelter becomes enclosed by dead. We can feel the fear that the world has come to the end, as a young mother jumps to her death after her baby, only minutes old, falls victim to the virus and dies.  The survivors must consider whether or not to stay in the hospital, in which they have taken shelter, even though staying means risking being over run by zombies.  There is also the issue that  going out to find supplies, or even a new shelter, is still yet a risk.  Is there any hope for these survivors?  Can they fend off the depression that threatens to overwhelm them?
Hope is presented in the form of Cooper - a soldier.  He is aware of where a secret military installation exists, having been routed there before the disaster began.  Though the survivors expect salvation, Cooper has other ideas, because for the first time in years, he is experiencing the freedom of not having to lead a military life.  Is the threat of the dead who have risen more dire, than what might very well be his chance to start a brand new life in the city of destruction?
In Autumn The City, we learn through the speculation of various characters that the zombies, while dead -- might be capable of feeling pain and their aggression might be because of their anger at being dead -- or a response to the pain that they feel as their bodies rot.  To some degree, this invests these nameless hordes with a touch of humanity, and a reason for their unrelenting stalking of the survivors.
I am extremely excited to see where Moody is going to take his story.  Will the survivors build a new civilization out of the destruction?  Will we ever find out who or what is responsible for 99% of the world's population dying?  Why are the dead suddenly able to move?  There are just so many questions to be answered, it will be interesting to see how Moody explains the world he has created and what other mysteries he has to challenge us with.