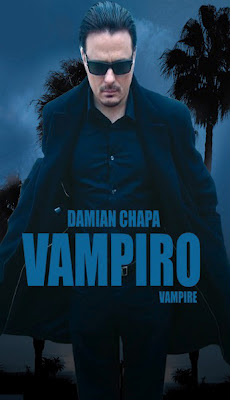 Vampiro was released in 2009 and stars, Vida Harlow, Damian Chapa and Leslie Garza.  I was attracted to this movie because the majority of the cast is of colour.  In most vampire movies, the stars are White and it is rare to even see a person of colour as a sidekick. Unfortunately, the change in racial dynamics was not nearly enough to save this film from itself.

The movie begins with the rape of Casanova's Mexican mother by a vampire. This results in Casanova a dhampire who turns human during the day and becomes a vampire at night. When Casanova is ten years old, his mother shoots herself in the head and this is Casanova's first real exposure to a massive quantity of blood.  Though the blood was the result of his mother's death he was still attracted to it.  From there, he is hunted by three vampires that Casanova's fathers send to either kill him or torture him.

Somewhere along the line he meets Alma, a young woman who is dying of a terminal disease.  He offers to save both Alma and her mother but before he can save Alma's mother he is attacked by vampires.  He manages to save Alma and they stay together for over a hundred years, with her providing him blood through a connection she makes at a blood bank.  Something does not go right with Alma's conversion and she remains in the body of a 13 year old girl, though she does get the bonus of being able to see the future.

Casanova's love interest in this movie is Bianca.  It is worth noting that Bianca is the only one referred to as White in the movie. Bianca is beaten and kicked for refusing the advances of a man at a party and so she joins what I can only believe is an all female gang. For some reason Casanova develops a connection with her and watches her surreptitiously at work. Bianca has a lesbian lover named I shit you not, Sexicana.  When Sexicana and Bianca are almost raped by cops, who should show up but Casanova to save the day. Sexicana of course wants her lover back and so she makes a deal with the vampires stalking Casanova, but it turns out that by time Bianca is to enthralled with Casanova to return.


I could go on, but I suppose by this time that you have the gist of the movie.  Women in this movie are continually subject to violence.  The movie begins with a rape and there are several others throughout the film.  Women are physically assaulted by men and are consistently cast as victims.  The only time violence or raped is stopped is when Casanova comes to the rescue.

There are very few movies in this genre with GLBT characters and first I was pleased to see the relationship between Sexicana (dear lord who chose that name?) and Bianca.  It turns out, that this relationship was just about titillation and obviously not serious, because Bianca quickly abandoned Sexi (yes, that was her nickname) the moment Casanova showed up. Bianca says that Casanova is the only one who has ever respected her and not wanted her for her body and yet just a few scenes previously, they had Sexicana, fight to protect her from two men who wanted to lay hands on her.  This tells me once again that if a woman wants to be safe, she needs to be with a man and that lesbian relationships are only something to be engaged in until the right man comes along. If that were not enough, Sexi was bitten which forced her to stalk Bianca though by that time she had given up on reclaiming her love.  Surprise, surprise, the lesbian who just can't let go ends up dead.

I have seen bad acting in my time, but Vampiro takes the cake.  All the lines that were delivered were wooden, though I could tell that the actors really were trying, they simply sucked. I think a raspberry award is actually too much of an accolade to be given to this film.  The story was at times so convoluted it was hard to follow.  Even though I watched the entire film, I have no idea how a supposed connection developed between Casanova and Bianca but I do know that his mother nicknamed him Casanova because he tried to kiss girl when he was young, because Casanova says this REPEATEDLY.  I don't even know why this is relevant to the story.

Stephanie Meyer may have her sparkling vampires but I do believe the writer of Vampiro took vampires to an all time low.  Sticking with tradition, the vampires in this movie could not be exposed to sunlight without burning and so to solve this problem and give us some daylight action, the vampires simply covered themselves in long brown robes and wore the same time of goggles that welders wear. Casanova, like the Cullens, does not feed on humans, and so he takes his blood intravenously. That's right, a vampire who shoots up. Could it be anymore ridiculous?  Like all vampires recently, Casanova is moldy and complains that he feels too much and is quick to remind anyone that will listen that he is different because he is not decadent and feels guilt.  Is it even possible to write a vampire these days that is not constantly angsting and guilty?

I watched Vampiro on Netflix.  I am eternally grateful that I did not spend the money to rent this film, as it was hard enough to sit through it. There were no special effects to speak of and the camera angles were terrible. The wooden bullets that Casanova created were not even remotely believable and how many bullets can one gun shoot anyway? Vampiro is two hours of my life that I will never ever get back.  My time would have been much better spent, doing the dishes, laundry, hell, even cleaning the kitty litter would have been more entertaining.