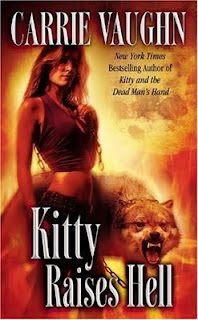 Kitty is back home in Denver – but it seems something has followed her from Vegas. After severely hurting and annoying a cult dedicated to Tiamat, a personification of chaos, she finds the deities name burned into her club. Very soon, it’s clear that some kind of fiery, intangible entity is hunting them.
And how do you fight something intangible? Something intangible that can burn anything it touches? Something intangible you can’t even see yet can burn you from the inside out?
And how do you do that before it kills anyone – or before it kills anyone else? How do you keep everyone safe?
And how can you fight it while at the same time reassuring and protecting a wolf pack, one you’ve only just adopted, one you’ve only just become alpha of?
And, when enmeshed in undead politics, how do you know who you can trust to help and whether you’re just digging yourself in deeper.
And how do you do all that and continue to run a successful and fun radio show?
Of course, tracking down what the monster is takes time and investigation – it’s a mystery. The problem with mysteries is it’s very hard to pace it well, and this is certainly an issue with this book. We spend a long time with Kitty and co basically sat around saying “I don’t know.” They follow up leads and get “I don’t know” back. They ask questions – more I don’t know. It’s kind of frustrating to feel it all going round in circles without actually going anywhere. However, I do accept that party of this is a thematic point. I mean, the characters are frustrated and lost and worried. They don’t know what’s happening, they know people are going to die, they know all their lives are at risk. So, yes, this is a realistic thing to happen
The problem is, from a reader’s stand point, while you can feel the frustration, you can’t feel the underlying fear and tension (or I didn’t, anyway) that would have made it nail biting. I wasn’t boring, it was still interesting it was even exciting at times, but there was that edge of “can we have the answer yet?” that frustrated me
I think the main thing that made it harder to deal with was the end. I don’t want to spoil, but the idea that they went through all these questions, pursued all these leads, thought people had died and went through all this worry – then they just get the answer like that? It robs from the tension – it becomes less of a “yes we’ve finally found the answer” and more “what, the answer was that easy? Guys, what were you whining about?”
Despite this pacing issue, the story is generally good. I liked seeing the paranormal team and Kitty working with them while at the same time being sure to reassure the pack and worrying about whether the pack will hold together. I absolutely love how Kitty and Ben have grown into alphas of the pack. They are strong without being new people, they have a completely different pack dynamic while maintaining the same instincts and drives. In fact, I think that’s the thing I love most about this series – the way that Kitty grows and develops as a person, growing into her role as a DJ then an investigator for her show then into an alpha for her pack – she grows but she’s still her and you can still see the same character she was way back in the first book.
I also really like the world as it expands. While we’re still focusing on the werewolves we’re slowly expanding outwards to spirits and demons and other creatures of legend. Then there’s the whole convoluted and myriad world of vampire politics that I think is really well done – plots within plots within plots which I really do like to see.  And we’re seeing more of magic and psychics and possible deities and there’s a great sense of a huge vast world just lurking round the corner – and it is lurking. There are no lengthy world building lectures or info-dumps while at the same time there is enough information to be intriguing and interesting.
Social justice wise, I’m less happy.
I am really tired of Kitty constantly using the term “outing” for vampires and werewolves. I’m also really unhappy with TJ. Yes, TJ, Kitty’s gay servant who had zero character, zero life and zero independent existence, who existed to serve and eventually died saving Kitty back in book 1? Well his little brother’s in town to lay on some angst and add some… well I can’t say character, because all we actually learn about TJ is that he was kicked out by his parents for being gay and then he had HIV. So we don’t so much learn more about him as much as attach a few more stereotypes too him and then make that all about 2 straight people’s sadness. And we can infer that TJ has gone through pretty much hell in his past, which makes his then becoming a servant and sacrifice to his BFF just even more unpalatable.  There are no new GBLT characters in the series since TJ, and I’m rather grateful for that, sadly
POC remain vague characters referred to in passing. Kitty, however, is a strong character who still leads. Her relationship with Ben takes lots of give and take but, in many ways, she is still the alpha, even if she does argue with Ben and give and take with Ben – there’s still a greater sense of alpha to her than Ben, which I’m glad to see. He is protective of her, but it’s more reasonable loved one protectiveness (especially considering that they’re under threat) than possessive protectiveness, no sign of Hauptman Ownership at all. And she does lead the pack – she leads them, is respected by them and is strong in the role.