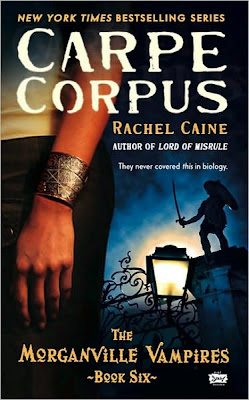 Morganville is under the control of Bishop. All resistance is quashed and even Claire is forced to obey with the magical tattoo that compels her will. The whole town is under Bishop’s brutal regime, anyone walking around after dark can expected to be hunted and killed by vampires loyal to Bishop and the old system of tax and protection has faded. In short, things may have been bad under Amelie, but they’ve never been close to as bad as this.
Of course, there is a resistance. Amelie is still alive and leading her vampires in a shadowy campaign against Bishop in a clever and desperate ploy to release his grip. Other vampires are seeking to flee the city, and no small number of humans as well. But Claire finds herself forced into the margins, unable to be part of the battle as people fear her under Bishop’s control (and others revile her as a traitor) and further as she is forced to follow the mentally unstable Myrnin who appears to have thrown his lot in with Bishop.
Add in Claire’s worry for Shane who has been imprisoned for trying to kill vampires along with his father, Claire’s being forced to work with Bishop even as he uses her for his vile control and Claire’s worry for her parents and being ostracised from her friends, well altogether times are pretty dire in Morganville.
This book had a really great story. Bishop is ruling the town and the resistance must both find a cure to the pervasive illness that is continuing to afflict them while, at the same time, work away to bring bishop down and roust him for good. It’s especially hard because several vampires have been forced to convert, serving Bishop – as has Claire herself. There follows a lot of careful manipulations, crafty plans and covert movements around Morganville, helped by some very clever and brave undercover agents in Bishop’s regime – all cumulating in a truly genius plan to finally bring Bishop down in an amazing play of cross and double cross.
The problem is I’m kind of extrapolating here. Because we’re following Claire. And Claire is involved in NONE OF THIS. So we don’t see it. Instead she whines about Shane being imprison, then spends a lot of time with Shane (and I’m not against this because the relationship is touching and sweet and actually kind of well done which surprised me. But there’s a war going on, less teen romance, more war!). She then spends much of the rest of the book moving medicine from lab to lab and following people around while they do things for the resistance with occasional bursts of random activity that doesn’t do much. I’m particularly not impressed by having Claire go and explore places for no reason. We’ve seen her do this before, in this book she decides to explore the boarded up coffee shop of Common Grounds. Why? No idea, a vague feeling at best. It’s sloppy writing.
And while we didn’t get to see all this fascinating behind the scenes plotting, instead we got some random scenes that didn’t matter much and added nothing to the storyline. The Goldman storyline that added nothing. Claire being kidnapped, AGAIN, for no good reason. The Dean storyline. Even the ending where they play pass the book with Bishop. They all seemed tacked onto this glorious main storyline we didn’t even get to see.
Claire, as a character and a portrayal continues to annoy me, especially since she is an observer to the actual events rather than an active participant.

I’m actually beginning to wonder why Claire panics when she is kidnapped. She should be getting quite blasé about the whole experience, since it seems to happen at least once in every single book. It’s beyond tiresome to see her kidnapped and rescued over and over again – but, of course, it serves to actually include her in plots where she has no real role or motivation to be part of it.
Of course, running around after everyone else means Claire has little in the way of independent (constructive) action. She’s either being dragged around by Myrin, ordered around by Bishop or begging for Amelie’s attention, And for all her vaunted intelligence, she continues to do silly things and have almost as little perspective as her parents.
And yes, her parents do take a prize for lack of perspective. In the middle of a vampire war, when being evacuated from the city before being slaughtered by vamps, their concern is that their daughter is… DUM DUM DUM, HAVING SEX! *gasp* *faint*.
We have a couple of small POC characters, including Hannah. The extra strong muscly black woman. She’s a stereotype, but she’s also pretty awesome and would have been a much better protagonist than Claire. We have no GBLT characters. We do have some insight into anti-Semitism faced by the Goldmans, but it’s not really more than a passing reference.
We have an ongoing element of mental illness with Myrnin, but it has never really been developed beyond “Myrnin is dangerous and will occasionally flip out and hurt people!” Mental illness is portrayed primarily as a threat or a devolution all the vampires are afraid of.
I actually liked this story, what I saw of it anyway. I liked Amelie raising resistance, I liked her plotting and I loved the ending – such a wonderful, manipulative clever ending, that was several kinds of impressive. The powerful emotions Amelie had for Sam, all this moving behind the scenes. I loved it – but we didn’t get to see enough of it because we were far too busy following Claire around.
It’s probably the first time I’ve though there’s an awesome story here – but we’re following the wrong protagonist And this is so frustrating! We can see a truly excellent series here and it’s proof that Rachel Caine has a damn fine storyteller brain. If we’d followed Amelie. Or Myrnin. Or Michael. Or Hannah. Or Richard Morrel. Or Sam. That would have been a glorious, epic tale. Instead we followed Claire who was, by necessity, shoot out of most of the story and involved herself in periphery activity at best