Review of Red-Headed Step Child by Jaye Wells, Book One of the Sabina Kane Series 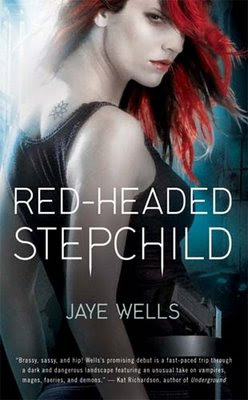 Sabina Kane is half vampire and half mage, in a world that looks down upon mixed blood beings.  Her vampire half is readily obvious, because like her mother and her grandmother, she has red hair. It's obvious to those that see her that she is still very young, and in fact a scant 53 years old by the fact that hair isn't very dark yet.  Sabina is an assassin, having been declined other roles due to her mixed heritage. Sabina was raised by her grandmother (because both of her parents are dead) to distrust and limit her contact with all other groupings of supernatural beings.

Sabina is fiercely loyal to her grandmother, even killing a dear friend when told to, because it was assumed that he betrayed vampires. She is strong, capable and desperate to prove her worth to her grandmother and so when she is sent to kill Clovis Trakiya, a being who is half demon and half vampire, who is attempting to supplant the Dominae (read: vampire leadership) she jumps at the opportunity.

The mission does not go as Sabina planned.  It begins to go awry when a demon stakes her and she does not die, thanks to her mage blood. Giguhl becomes stuck in the human realm and is forced to mascaraed as a cat. Adam the mage who has been following her becomes her love interest and ends up being the one to introduce Sabina to her mage heritage, causing her to question everything that she knows as true.


Red-Headed Step Child is not a unique story in many ways.  As I mentioned above, once again we have a protagonist with dead parents. I don't understand why urban fantasy writers are so determined to give their protagonists a tragic past. At times the plot is a touch predictable but it is saved from being just another run of the mill urban fantasy books by the humour.  The relationship between Giguhl in cat form and Sabina is touching and hilarious.  How can anyone not love a talking kitty with a ton of attitude?  There were times when I laughed out loud.


There is one GLBT character in this story; Ewan is a bar owner and a gossip.  Wells tries to redeem this by suggesting that Ewan trades in information, but it still amounts to one of the most common tropes aimed at gay men. At the beginning it seemed that Ewan would have a large role in the story and so I was disappointed, while not shocked, that he ended up being murdered by the Dominae.  Having the sole gay character die to prove just how evil and unfeeling the Dominae die is jut another example of how disposable gay people have become in this genre.  Just like many writers Wells has added a gay character for the purposes of inclusion, and then followed it up with a shitty portrayal.

There are no characters of colour in this book, and while this is annoying, it certainly isn't anything new to urban fantasy.  My problem in the case of Red-Headed Step Child, is that the language of race was used to describe the various supernatural beings. It very much felt that because the story included a very large world, with various supernatural beings that they could function as a replacement for people of colour.  There always seems to be a reason why we are erased and it is never acceptable, especially when said inclusion includes language that is very specific to marginalized people.Wells also has a little penchant for disableist language.  Sabina constantly described her responses as lame and there were no disabled characters in the novel.

Though Sabina is a strong character at times she is a little prone to something we like to call Kellie Independence.  This means that her response to discomfort is anger or violence.  She does show that she is capable of controlling herself but it always seems to come at such a strong personal cost.  There are also times when it is hard to believe that Sabina is actually 53 years old as well.  At times she seems more like a pissed off teenager than anything else. The same is also true of Giguhl, who is supposed to be a demon, who is thousands of years old.

I know that I mentioned a lot of social justice fails as well as repeated tropes writing this review, but I generally really like this book.  It was funny and touching at times.  The ending left me, as a reader, wanting to know more about Sabina's journey.  At this point, I really don't have much hope for more inclusion because of the caviler way that marginalized people were treated in the story, but I don't find Wells treatment of marginalized people drastically worse than many of the novels I have read in this genre.  For what Red-Headed Step Child is, it's funny, engaging and a bit of a wild ride.