Review of Tracking the Tempest by Nicole Peeler: Book 2 of the Jane True Series 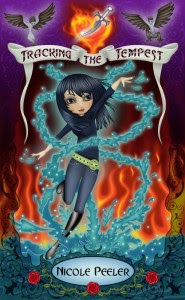 Tracking the Tempest begins four months after the ending of Tempest Rising. Jane is back in Rockabil and she is beginning to learn how to control how powers.   She learns how to raise her shields but not without burning off one her eyebrows.  Life has settled into a nice little routine. She works at the bookstore, takes care of her father, trains and goes on long weekend with her boyfriend Ryu the vampire.  This is the happiest time in Jane's life and I suppose that should have been a warning that the bottom was about to drop out.

On a visit to Boston to visit Ryu for Valentine's day she comes to the attention of Conleth a rogue vampire hafling.  For the majority of his life Conleth had been experimented on and now he wants revenge and he wants Jane because he feels that she alone can understand what he is feeling.  Not wanting to be in danger, Jane returns to Rockabil only to have Conleth follow her there and attack.  Realizing that staying in Rockabil means endangering her loved ones, Jane decides to go back to Boston and aid in the hunt for Conleth.  Fearing for her safety Anyan the Bagharest follows and though she is not used to him in his human form, they become closer.

As a protagonist Jane continued to grow in this book.  Ryu tried to play the alpha male and he expected Jane to just stay behind like a good little woman, but she did not tolerate this.  At one point she even jumped in front of a knife meant for him.  Though Jane is clearly afraid, she keeps pushing forward.  She discovers very necessary clues that the others would have missed because they discount things like reading due to the belief that writing books is a pathetic attempt of humans to secure immortality. Her decisions are well thought it which is a rare thing to see in a genre that is filled with spunky agency.


Jane continues to enjoy a very active sex life.  She is adventurous and never feels any shame.  What I don't like is the fact that in dangerous situations, Jane's libido always seems to pop up.  Yes, being afraid for your life is apparently the biggest turn on.  It was ridiculous and I found it extremely distracting.

What is perhaps most spectacular about Jane is her absolute refusal to completely rearrange her life for Ryu.  This is something that actually happens quite a bit in paranormal romance.  Jane realizes that though her life in Rockabil is slow in comparison to what she would have with Ryu in Boston, she enjoys her life there.  I love that she points out that though people do sacrifice all the time for love, expecting someone to do so, is not a sign of love.  Ryu didn't want compromise, he wanted submission.

In Tempest Rising we were introduced to Grizelda a lesbian porn star.  At the time, we noted the stereotypical nature of her character.  Peeler decided to step away from this and give us some backstory on Grizelda.  We learn that Grizelda has two lives, one in which she is out and the other in which she is not.  I thought the choice of having Grizelda be out in a small town and closeted in a larger area to be strange.  In the real world it seems to me that it would work the other way around.  It was however made clear that family expectations would not allow Grizelda to be who she was, and I do think that this unfortunately is something that happens all to often to GLBT people.

Once again, Peeler has created a world which is nearly universally White.  It is further problematic in that the two people of colour who do appear in the story end up dying.  They serve as a plot point and we don't actually learn anything tangible about them.  Though Jane, does get upset when their dead bodies are found, the treatment of these characters is extremely problematic.  A large part of this story was set in Boston, and I see no reason to justify the erasure of people of color.  It is further troubling that Peeler saw fit to create a large supernatural world as a faux sort of inclusion, while people of colour existed solely to die.  Having a large world does not make up for exclusion.

Despite the social justice fails, I enjoyed Tracking the Tempest.  At times it did however feel as though they were chasing their tail rather than investigating. The fact that there was even a question of Phaedra role considering who she worked for was absolutely ridiculous.  This means that the ending of the mystery itself was not in the least bit surprising.  I understand that a mystery is somewhat necessary to an urban fantasy book, if it is not going to be based in a romance; however, creating it in such a manner that contains little to no surprises does not make the story itself thrilling.

I am interested to see where Peeler is going to take Jane in the following books.  Will she forgive Ryu for his presumptuous  ultimatum or will she mover closer to Anyan who has watched over her since she was a child?  Will she ever leave Rockabill for the larger world, and how much will her power grow?