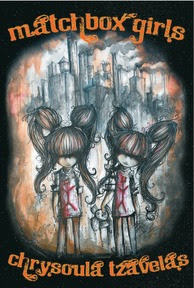 Marley is a young woman in LA, struggling with anxiety and depression and barely getting by with the help of her friends Branwyn and Penny. When she gets a phone call from 2 4 year old girls, twins under the care of their uncle, her friend Zachariah. Zachariah has disappeared without a trace leaving them alone with instructions to call Marley if they need help.

Simple babysitting quickly gets out of hand when it seems there are some powerful forces out to get the twins – and not just powerful with wealth and influence, but with abilities she cannot understand. But even they seem to weak compared to the twins themselves.

But it’s not just Marley dragged into a world with Angels, Demons, faeries and Nephilim – her friends are in the firing line as well, targeted to get at her

Marley spends much of this book lost and confused. And, since we’re only watching through her lens, then we spend most of the book in the same state. It manages to pull it back just in time before I reach the point of putting the book down in frustration. But up until about 40% into the book I feel lost. There are pieces of the puzzle but none of it first together and a whole lot is missing. I like questions and mysteries and investigation – but if the questions don’t come together and at least begin to form a pattern it just becomes confusing and a little lost. For so much of the book we know something is after the twins, but we don’t know who or why. there are people who seem to be trying to help but we don’t know why or who or what or whether they can be trusted. There are strange things happening but we don’t know how. And Marley spends much of the time running away – including from potential explanations (reasonably, since why should she trust these people, but still).

However, once we’re past that 40% the story starts to come together and we can follow along much easier – which means the plot picks up in a way that makes sense and the main characters can start engaging with the plot more rather than reacting to it in confusion. After that, Marley starts forging her own path, speaking to the beings she wants to, working her own way and coming up with her own ideas and plans. Once we know about the world, Marley tackles it and we start to dive into it more solidly. She follows ideas and clues, learns why the twins are so targeted, actively seeks Zachery and confronting the enemies rather than running, hiding and being confused. Then we get a lot more excitement, a lot more fascinating world building and I can start cheering and rooting for Marley rather than being confused along with her.

Some of the mystery remains right to the end – the exact nature of the twins and Marley for that matter, remains unknown – but some questions leading into the next book are great to have. It’s too many unknowns for the plot to handle that loses me.

The world itself is fascinating and unique. In a genre where we see the same patterns and the same creatures repeated often in very similar ways (but with many interesting twists), a completely new take on things is a refreshing breeze. We have the Nephilim, children of immortal, celestial beings. And we’re way beyond simple angels and demons – and even the angels and demons aren’t like we expect. In theory we have the potential for a vast variety of beings based on which celestial being created the Nephilim and how the Nephilim adapt (we even had a griffin, that’s a new one on me for Urban Fantasy) to the world and what powers they have. Even the villain is certainly an unusual choice but it all fits the world setting with humanity (and their cousins, the Nephilim) living in a world where the celestial beings have been limited and contained – held away to preserve humanity’s independence. It’s, frankly, a brilliant world and I want to see much much much more of it.

In terms of inclusion we don’t have any. The cast is straight, white and pretty much able bodied. It’s an extremely erased Los Angeles. Marley was presented as being depressed with anxiety attacks in the beginning, requiring medication to manage it and describing severe mood swings, massiv e anxiety and depression and really it was a great description and portrayal of mental illness – but it doesn’t last for various reasons that I’m not going to spoil.

In terms of female characterisation – Marley is pretty good. She has problems and she isn’t super woman. She’s lost and alone in a time when you’d expect her to be and tends to follow when she doesn’t know what she’s doing. She spends a large part of the book lost, confused, overwhelmed, angry and not entirely rational. But since she’s gone from living a relatively mundane life to “monsters are real!” that’s understandable. In fact, once she gets her feet under her she takes charge, makes plans and makes her own choices and challenges the other characters and the situation. She’s actually so strong and pro-active and making her own decisions that she almost borders on spunky agency. She jumps in a little too fast – her decisions aren’t awful and don’t lead to disaster, but she makes them without considering her own ignorance or consequences at times and may force AT and Corbin to run after her because she’s acted before speaking to them. It’s not Spunky Agency and every action is justified – but she’s a trifle reckless (for good reason).

The other female characters are her friend Branwyn who is just awesome all round and attacks fae with a large iron bar and creates the Lullaby Spear. I like her a lot. And Penny – now Penny is a victim, she exists entirely in the story to be saved by Marley and to try to be used as leverage against Marley, but there is some reason behind her victimhood and her desperate validation seeking and some kick arse characters who balance it. AT is also pretty good and kick arse but somewhat stuck in a service/sacrifice role – however that can just as easily be read as them all sharing the same roles – and she refuses to fit into Corbin’s strict mold. So on the whole I’m going to go with good here.

Less good is the way Marley thinks of her biological mother (who never shows up in the series), who abandoned her as a child to be adopted by a loving family. She’s highly judgmental of her, engages in slut shaming and is pretty inflexible in her condemnation.

All in all, I like this world, I like these characters and now that we’ve past that confused “aaargh, magic is real!?” moment, this series shows extreme promise in the “I will mark when the next book comes out on my calendar!” sense. As a stand alone, it’s good but spends too long on the introduction part of the story.

An Advanced Reader Copy of this book was provided. Like all our review requests, this review is honest and un-sugarcoated nor was the author shown it or permitted to edit it before posting.
Posted by Sparky at 3:00 PM