Review: Secrets of the Demon by Diana Rowland, Book 3 of the Kara Gillian Series 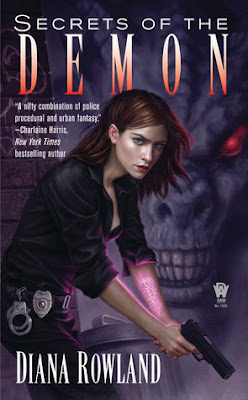 Kara Gillian is out for another mystery in Beaulac. It starts out peacefully enough – a stalker threat against a popular musician – but becomes much more complicated when the stalker is shown to be non-human

And then the bodies start piling up – bodies that aren’t so much unconnected, but have so many different connections it’s not sure which ones are actually relevant and the reasons behind the killing. Add in that the arcane forces being used in the attack are beyond Kara’s knowledge or experience and we have both a mortal and magical mystery to solve. And, of course, she has to manage this while negotiating the standard problems of the justice system and keeping her secret, secret. As well as the dilemma of what to do with a case you cannot prove?

At the same time Kara continues to have her confusion relationship with Rhyzkahl in her new role as his Summoner as well as juggling her mortal relationships – especially with Ryan. And even more so as more of his past becomes known.

I’ve said before and I’ll say again about this series - the plot was well written and paced with enough side issues to keep Kara interesting during the slow parts of the investigation but not too many that we’re distracted and bogged down. It had enough detail about the investigation to make it feel real and realistic, enough clues to keep us guessing but enough mystery to stop us knowing the answer too early. There was also well maintained meta-plot and character reactions without any excess or dull scenes dragging the book down. I think perhaps, in an effort to make each book stand alone, we have scenes and settings described more than is necessary (the dimensions of Kara’s office, for example) but it’s not a major issue by any stretch

I actually like how many people are now in on Kara’s secret, though your mileage may vary. A little hoop jumping to try and hide the supernatural is fine, but considering her job and the people around her, Kara keeping the secret from so many would rapidly become untenable. Her ability to solve crime would involve pages and pages of desperate cover up and/or convoluted luck brushing everything under the rug. I really like the way it’s done, she has a small circle of people she can trust who know what the real score is and none of them are in vast positions of influence for it to be abused for Deus Ex Machinae reasons. Also it means she has a Scooby gang, I like a Scooby gang, I do. Speaking of the Scooby gang, I also have to praise the banter between Kara and her friends, it never fails to make me smile

And, of course, we had a lot more backstory hinted at and revealed with Zach and Ryan. There are still far more questions to answer (and I am dying to know) but we’re getting a few more revelations with each book – the meta-revelations are moving on through the series preventing it being a lot of “monster of the week” books. In fact, there is general growth – Kara’s relationships, Kara as a character, Kara’s knowledge and power as a Summoner (without her developing massive new super powers every new book, which, yes irritates me). It makes not just the books well paced, but it makes the series well paced as well.

The world building remains fascinating and I’m hungry for more. Different ways of wielding the Arcane, different demons, different abilities – and you can see how this could work into so many more supernatural creatures based on different workings of potency. The only tiny question I have is over the sheer number of supernatural people there are in Beaulac – because there’s been a lot. Is this common place or does this patch of Louisiana attract the freaky?

As ever, we can rely on the Kara Gillian series to cast an unflinchingly lens on law enforcement and the benefits of wealth and power. Here we see not only how much a lower priority white collar crimes get, but also again see how the rich and influential try to push to have cases dropped, influenced and controlled as well as gaining inside access into files and cases they have no right to have access to. I love this commentary and how important it is for it to be made so clear.

One thing I loved was the complete rejection of slut shaming. After Kara spent the last 2 books feeling guilty about her relationship with Rhyzkahl, here we have unequivocal rejection of that shame with both Kara working that through but especially from the truly awesome Jill. Jill’s slap down is just awesome, completely eviscerating the idea that Kara has anything to be guilty for or that Ryan has any right or reason to judge her. And even further points out that if she does want a relationship with Ryan, it’s not written that HE has to make the first move, and finishes off the full wave of awesome by saying that she would banish the Disney princesses from her house for the destructive, helpless messages they send. All hail Jill, I say.

Kara also calls out Ryan for his judgmental arseholery quite nicely and gets a retraction and an apology. Perhaps, there’s a bit of a magic sorry element going on here (whole issue is solved by the sorry, all fine now… things are rarely that simple) but I’m glad she calls him on the carpet for his behaviour

The treatment of fat in this book is better than the last one, with the overweight cop being both a nicer person and not having their weight constantly referenced. We also have Crawford, a sympathetic character, who is struggling with his weight. But to weigh the scales back to the negative, we have the Diet & Exercise Success! who not only loses weight and is healthier, but is happier, no longer fatigued and is no longer pale and unhealthy looking. He even has a more flattering hair style. I checked the bottom of the page for a footnote trying to sell me an overpriced exercise machine, to be honest.

In terms of inclusion on race we have 2 Black characters – the new chief is Black. He has been in past books and I completely missed the description (partly my bad but partly not made very clear methinks). We also have a new road cop being trained and probably going to become a detective (and, hopefully, eventually inducted into the Scooby Gang). Both are minor characters but at least both are very good at their jobs and the chief is not only non-corrupt but actively resists corruption. Still, that’s not a lot for Louisiana. There are still no GBLT characters.

We did have a disabled character who had suffered brain damage. He was manipulated and used and his treatment was shoddy, I think I would have preferred more analysis of him than him being used and treated with paternalistic condescension and infantilism but at least his victimisation didn’t continue. I’ll actually be interested to see if he shows up in later books.

I still love the women in this book. Kara remains intelligent, snarky, fun, capable, independent, imperfect and real character that was devoid of Spunky Agency with the added bonus of resisting the slut shaming she faced previously. She even both side-eyes Rhyzkahl’s offer of protection when she feels its “big strong man protecting his woman” AND accepts it when she feels it is necessary. Jill is awesome and I love her, yes yes I do. Even her aunt is a fun, quirky free spirit happy to have an openly sexual relationship. In fact, I'll say all the secondary characters in this book are great because they're fully developed, real characters.

All in all, yes I loved this book, I’d recommend this book and I fan poodle the author. Yes yes I do.