Review of Flesh and Blood by Kristen Painter: Book 2 of the House of Comarré Series 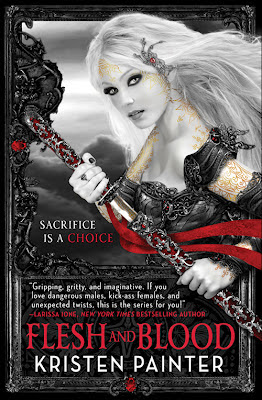 Tatina of the house of Tepes, and Chyrsabelle the comarré, still have unfinished business.  When we last left the house of comarré series, Tatina had murdered Maris, Chyrsabelle's mother, and in return, Chrysabelle had severed her hand.  Back in their own separate spheres, Tatina is even more determined to capture Chrysabelle, and force her to hand over the ring of sorrows.  Chyrsabelle of course wants vengeance for the death of her mother, and to keep a promise to Mal about finding away to end the curse that plagues him.  Doc, a leopard Varcolai, (shifter)  is desperate to find a way to save Fi, the ghost woman he loves, and he is even willing to take on the powerful anathema Dominic to do so.  There is also Creek, a member of an secret society named the Kubai Mata, whose purpose is to protect mankind, and his mission is to secure the ring.


As you can see, there are several story lines being intertwined in this one book.  The one that is the most typical, and quite frankly the most annoying, is the love triangle that develops between Creek, a Native American man and Mal the cursed vampire.  Creek was sentenced to seven years in prison after he murdered his father to protect his sister and jumped at the chance to be become a Kubai Mata, to secure his freedom and gain a better life for his family.  He makes it clear repeatedly that though he is a member of the group, that they don't trust him enough to give him a lot of information.  With everything that he has at stake, he still finds Chrysabelle quite irresistible.  At first he cracks it up to not being with a woman for many years, but in the end, he simply decides that there is just something special about her. In part, Mal is heavily attracted to Chrysabelle because she is a member of the comarré and has been bred specifically because of the specialness of her blood.  He is impressed by her determination and physical strength.  What I don't understand is why Mal continues to love her, after she takes away his only chance to be human in what is clearly a selfish act.  Unlike many vampires who are self-loathing in urban fantasy because that just seems to be the in thing, being twice cursed adds validity to Mal's desire to remain human once given the chance.


I am particularly upset with Creek's fascination with Chrysabelle, because it seemed in many ways to be based on her Whiteness.  There were constant mentions to her skin virtually glowing and her long blonde hair might was well have been a crown.  Not for one moment are we allowed to forget that Chrysabelle is White and many ways, this Whiteness is given a moral value of pure goodness.  This is especially true when juxtaposed to Tatiana, the Roma antagonist. At times it reads as though getting Chrysabelle to agree to a relationship with Creek, would equal an elevation of his person.

Doc, the other man of colour in this series, is also in love with a White woman.  Unlike the relationship between Creek and Chrsyabelle, there is no elevation of Fi based on her whiteness.  Interracial relationships in and of itself are not problematic, but I cannot help but wonder what it is that there are no intra racial relationships in the story?


All of the women of colour are problematic in someway.  Katsumi runs Dominic's bar for him and she openly admits to being greedy, ambitious, spiteful and untrustworthy.  It is only when she almost loses her life at Tatiana's hand does she experience some sort of conversion.  Dominic grants her navitas (the ability to be reborn as a noble vampire), and suddenly she is ready to put her scheming ways behind her.  This of course means that she will now be Dominic's faithful servant and stop trying to find a way to elevate herself. Chrsyabelle is considered good because she thinks for herself and makes her own, but somehow Katsumi, who is trying to make her way in the ruthless cutthroat vampire world is evil and twisted.  Why is it okay for Dominic to live in pure opulence through his illegal activities, while Katsumi gets no such sympathy for her desire to better herself? Yeah, I know, I know, women of colour have to know their place.

This story is clearly moving towards a showdown between Tatiana and Chyrsabelle.  In Flesh and Blood, they meet briefly, but a final confrontation is forestalled by the rising of the sun.  At this point, I just want them to go ahead and have the big battle already, rather than circling each other.   For someone who is clearly devious, Tatiana spends a lot of her time chasing her tail when it comes to Chyrsabelle.


In addition to the vast world, introduced to us in Blood Rights, Flesh and Blood adds witches and an Indigenous medicine woman. The witches are scheming and are more than willing to manipulate Doc, and in fact any other person/creature that they can to get their way.  They seek power, but have no clearly defined goals beyond potentially ruling the world. A momentary connection is made between Aliza and Tatiana, when Tatiana gives Aliza the opportunity to save her daughter, based in the fact that as a mother, Tatiana knows what it's like to want to save a child.  I suppose that this was done to humanize Tatiana and make her seem more complex.  The medicine woman is Creek's grandmother, and she is of course situated as the wise person of colour. We learn nothing about her and she shows up only long enough to cure Chrsyabelle of a her wounds are the comarré cast her out.


With Maris gone from the story, there are no disabled characters whatsoever. Instead of adding a disabled characters, it is continually inferred that because Tatiana went through navitas to become a member of the Tepes house, that she is "crazy." Obviously, this is ableist because it leans heavily upon the construction of the neurologically atypical as violent and dangerous to others. Everything that is wrong with Tatiana is supposedly because she is "crazy". The House of Comarré series also continues to be completely free of GLBT characters.  It almost feels as though Painter felt that creating a large world, with various supernatural characters would make up for the racist tropes that she engaged in with her characters of colour, erasure of GLBT, ableist portrayal of disabled people, and elevation of Whiteness.  The House of Comarré series is set years in the future, and yet Painter could still not find a way to create real inclusion.


I really want to like this series, but the elevation of Whiteness, while people of colour fill the roles of sidekicks, nursemaids and of course the big bad is irritating and quite frankly racist.  I found myself wanting to scream, yes,we get it, Chrysabelle is White, every single time that Painter went into a rendition about her shiny skin and long blonde hair. Chrysabelle also customarily wears white, though she has the option to wear other colours, now that she is no longer a comarré, and this of course serves to further position her as pure and good.  It's like being hit over the sledgehammer with Whiteness. The elevation of a White woman in this way is anything but new and inventive -- in fact -- it reads like just another day in a White supremacist world.